The Navy Department Library gratefully acknowledges Dr. Harold D. Langley for writing the above essay on the history of flogging and preparing an annotated bibliography on the subject.

Brief History of Punishment by Flogging in the US Navy

Warnings against the excessive use of flogging were written as early as 1797 by Captain Thomas Truxtun and in 1808 by Surgeon Edward Cutbush. A proposal to abolish flogging was first introduced in Congress in 1820 by Representative Samuel Foot, but it was unsuccessful. Congressman Foot was the father of Andrew Hull Foote, who was later an admiral in the Civil War. In 1831 Secretary of the Navy Levi Woodbury issued an order that said until Congress changed the existing laws governing punishment in the Navy, whenever such laws allowed a discretion in the use of punishments, he recommended that in the case of seamen, commanding officers should first resort to fines and badges of disgrace, and other forms of mild corrections rather than using "the humiliating practice of whipping. "Later, Secretary of the Navy James K. Paulding issued an order to commanding officers that flogging was to be administered in accordance with the law and always in the presence of the captain. The New York Evening Star newspaper praised Secretary Paulding's action. It also reprinted some material from the Norfolk Herald concerning the arrival of the sloop-of-war Vandalia in Norfolk after a cruise in the Gulf of Mexico under Captain Uriah P. Levy. The Herald noted that Captain Levy had kept his ship in prime condition without the use of flogging. The story told of Levy's system discipline and substitutes for the lash including badges of disgrace. The editorial of the Evening Star on Levy and material from the Norfolk Herald were reprinted without comment in the January 1840 issue of the magazine, Army and Navy Chronicle. But Lieutenant George Mason Hooe brought charges against Levy for "scandalous and cruel conduct, unbecoming to an officer and a gentleman" in ordering a substitute punishment for a boy in the ship. The boy, who was 16 to 18 years of age, was charged with mimicking an officer of the ship. Unwilling to flog the boy, Levy ordered him tied to a gun with his trousers lowered. A small quantity of tar, variously described as the size of a silver dollar to the size of a man's head, was applied with oakum to his buttocks along with some parrot feathers. Levy was tried by a court martial and sentenced to be dismissed from the service. President John Tyler reviewed the findings. He said that Levy had acted within the spirit of Secretary Woodbury's order. While Levy had resorted to "an entirely disgraceful punishment" his motives were good, the punishment drew no blood and caused no harm. Tyler reduced Levy's sentence to a twelve month suspension. The court martial of Levy probably made many other officers unwilling to employ substitutes for flogging. Levy continued to oppose the practice and reportedly wrote newspaper articles on the subject. Other line officers who opposed the use of flogging were Captains Robert F. Stockton, Lawrence Kearney and John C. Long.

Meanwhile men who identified themselves as former sailors were presenting their views to the public. In 1840 William M. Murrell published a book entitled Cruise of the Frigate Columbia Around the World. In it he recounts how men received twelve lashes for trivial offences such as having dirty pots or failing to close the door of a toilet. He himself received twelve lashes for failing to properly mark a piece of clothing and for accidentally spilling ink on the deck. Murrell condemned the flagrant use of authority, but he believed that flogging should be retained for some offences such as stealing.

The year 1840 also saw the publication of Richard Henry Dana's Two Years Before the Mast, in which he recounted his experience as a merchant sailor in the brig Pilgrim. He presented a description of a terrible flogging in the ship in 1839 and of living under tyranny in the ship. But in the last chapter he doubted the expediency of abolishing flogging. In 1841 a former enlisted man named Solomon Sandborn published a pamphlet entitled An Exposition of Official Tyranny in the United States Navy which set forth instances of the abuse of various regulations by officers and called for the abolition of flogging. Other former enlisted men also published accounts of their naval service and of abuses of authority by officers.

In the public mind, especially in the North, the practice of flogging was often associated with the treatment of convicts and slaves, and it was believed to be contrary to the democratic spirit of the times and the ideals of the United States. Support for this view came from William McNally, who claimed to be a former sailor. In 1839 he published a work on Evil Island Abuses in the Naval and Merchant Service in which he argued that sailors were treated worse than slaves. He cited instances where more than the legal number of lashes were inflicted in floggings. He also argued that flogging kept Native American men from joining the Navy. This, in turn, led to a shortage of manpower in the Navy and merchant service which led both to resort to using foreign-born sailors. Reformers said that if American citizens were decently treated, they would be more likely to serve in both the Navy and merchant service. Such reformers also argued that the Navy's daily issue of grog, or whiskey mixed with water, was the source of many of the disciplinary problems. Therefore if the grog ration was abolished there would be less need for flogging. If flogging was abolished the service would be more attractive to American men. The American Seamen's Friend Society, a religious based organization, was in the forefront of the movement to eliminate grog and flogging. It included among its membership some naval officers. In the 1840's a number of civilian groups began to petition Congress to abolish flogging.

One reflection of this movement came in 1847 when John P. Hale of New Hampshire was elected to the Senate by an anti-slavery party. Earlier Hale had served as a Democratic Representative from New Hampshire, and in 1844 and 1845 he introduced amendments to bills that would abolish flogging in the Navy. These efforts were unsuccessful. Following his return to Washington he announced to the Senate his intention to abolish flogging. Between December1849 and June 1850 the Senate received 271 petitions from the citizens of various states urging the end of flogging. In 1850the Secretary of the Navy sent an inquiry to a number of naval officers asking for their opinions on whether flogging and grog could be eliminated without damage to the Navy. Of the 84 replies received by the secretary, only seven officers thought that flogging should be discontinued. Therefore when Senator Hale succeeded in getting a law passed in September 1850 abolishing flogging in the Navy and merchant marine, there were a number of naval officers who thought that the legislation was misguided.

Meanwhile in March 1850 Herman Melville's novel, White-Jacket, or The World in a Man-of-War was published. It contained a chapter on flogging and others on its evil effects and unlawful use. He called for its abolition. Some naval officers took exception to Melville's remarks and wrote rebuttals, a few of which were published in newspapers or pamphlets. The document reproduced above, A Plea in Favor of Maintaining Flogging in the Navy, may have been inspired by Melville's novel, by the action of Congress, or by the campaign of some officers and civilians to restore the practice of flogging. This effort was decisively defeated after a speech in the Senate in 1851 by Senator Robert F. Stockton of New Jersey, a former Navy captain. Naval officers had to adjust to new conditions, and there was increased pressure on Congress to enact new regulations. In March 1855 Congress passed a law for the more efficient discipline in the Navy. This established a system of summary courts martial for minor offences. It could sentence guilty men to a solitary confinement, with or without single or double irons, and/or a diet of bread and water for a limited time. It could also give bad conduct discharges. In 1862 Congress gave the force of law to a major revision of all Navy regulations that reflected a more progressive view of discipline.

Note: In September 1846, after the death of his father, Andrew Hull Foote added an "e" to his last name. 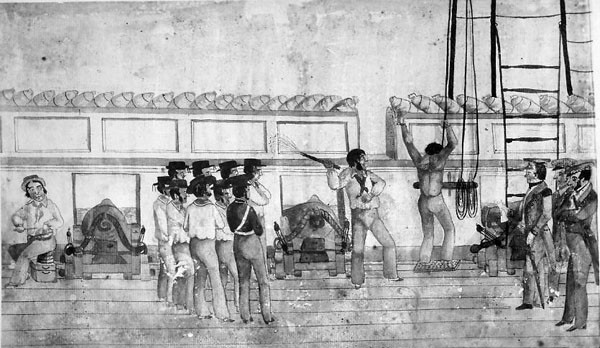 Select Bibliography on Flogging in the US Navy:

On discipline in the early Navy and the attitudes of officers on flogging, see: Christopher McKee, A Gentlemanly and Honorable Profession: The Creation of the U.S. Naval Officer Corps, 1794-1815(Annapolis, MD: Naval Institute Press, 1991). McKee makes a case for the utility and effectiveness of flogging and that very few members of a crew experienced it. The work also contains a table(see page 479) of the number of lashes awarded by the captain per instance of punishment.

On the movement to abolish flogging and grog and reform enlistment and discharge practices, see Harold D. Langley, Social Reform in the U.S. Navy, 1798-1862, (Urbana, IL: University of Illinois Press, 1967).

For a detailed account of discipline in the Navy see James E. Valle, Rocks and Shoals: Order and Discipline in the Old Navy,1800-1861 (Annapolis, MD: Naval Institute Press, 1980).

Biographical accounts of some of the reformers include Robert H. Sewell's, John P. Hale and the Politics of Abolition(Cambridge, MA: Harvard University Press, 1965); Harold D. Langley, "Robert F. Stockton: Naval Officer and Reformer," in Command Under Sail: The Makers of the American Naval Tradition,1775-1850, edited by James C. Bradford (Annapolis, MD: Naval Institute Press, 1985). A well documented account of the life of Commodore Uriah P. Levy has been completed by Captain Ira Dye, USN (Ret.) and is awaiting publication.

Horan, Leo F. S. "Flogging in the United States Navy: Unfamiliar Facts Regarding Its Origin and Abolition." US Naval Institute Proceedings 76, no.9 (September 1950):969-975.

Lockwood, John A. An Essay on Flogging in the Navy: Containing Strictures Upon Existing Naval Laws, and Suggesting Substitutes for the Discipline of the Lash. New York: Pudney & Russell, Printers, 1849.

A Naval Encyclopaedia: Comprising a Dictionary of Nautical Words and Phrases; Biographical Notices, and Records of Naval Officers; Special Articles on Naval Art and Science, Written Expressly for This Work by Officers and Others of Recognized Authority in the Branches Treated by Them. Philadelphia, PA: L.R. Hamersly & Co., 1884. [includes definitions of flog and Cat o' Nine Tails.].

Definition of "flog"
To punish by striking with the cat-o'nine-tails. This punishment is now forbidden in our [US Navy] service, though quite common in some others, particularly the Russian. To flog the [hour]glass, to agitate and so hasten the flow of sand through it; sometimes practiced in early days by midshipmen eager for their watch to be up.

Definition of "Cat o' Nine Tails"
An instrument formerly used for flogging in the [US] navy. It consisted of nine pieces of cord, with three knots in each, fixed on a short piece of thick rope as a handle. With this the offender was flogged on the bare back.

Source: A Naval Encyclopaedia: Comprising a Dictionary of Nautical Words and Phrases; Biographical Notices, and Records of Naval Officers; Special Articles on Naval Art and Science, Written Expressly for This Work by Officers and Others of Recognized Authority in the Branches Treated by Them. Philadelphia, PA: L.R. Hamersly & Co., 1884.