Occupation of the Gilbert Islands 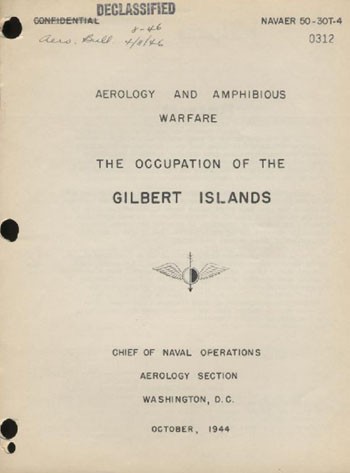 The significance of weather in this operation was noted by Commander, Central Pacific force. In his report he stated that:

A STATEMENT OF THE WEATHER PROBLEM

The occupation of the Gilberts was particularly concerned with three possible weather conditions which could have seriously interfered with the operation. As stated by Commander, Central Pacific Force, these conditions were:

Marshall and Gilbert Islands. As stated by Commander, Central Pacific Force, this map "was a combination of (a) the normal location of the frontal zone, and (b) the trend of the factors controlling its position." Its construction was based on three assumptions:

Because of the vital importance of wind direction to the success of this operation, a submarine was stationed to the west of the Gilberts, where it was possible to make weather observations necessary to give advance information on the possible unfavorable development of westerly winds. Another submarine, stationed near Tarawa, was able to obtain and transmit observations of surf conditions at that heavily defended objective.

WEATHER AND THE OPERATION

By 19 November, information from various sources indicated that the preliminary weather analysis had been correct and that the prognostic chart prepared in October (page 3) was an excellent representation of current weather conditions. The following is a review of the forecast with the verification evidence.

A number of bombing planes left the Ellice Islands on 16 November to complete a mission at Maleolap in the Marshall Islands. Several of the planes had to turn back due to bad weather over the Marshalls while others found the target covered by an overcast. Weather over the Gilbert Islands was found to be favorable.

The submarine on patrol near Tarawa made the following (paraphrased) report: 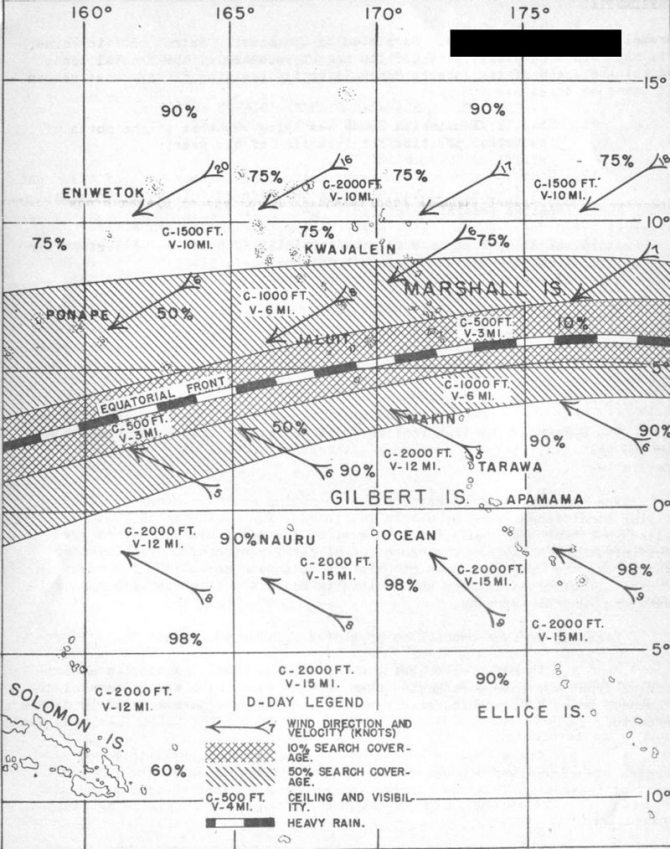 On the 19th, the following (paraphrased) forecast was received from the Fleet Weather Central, Pearl Harbor:

The initial landings at Makin and Tarawa were accomplished on 20 November under expected weather conditions: partly cloudy skies, with cloud bases at 2,000 feet; surface wind east-southeast 12 knots; sea slight. The temperature was 81.5° F and the relative humidity 82 percent. All phases of the initial assault - surface and air bombardment, strafing of the beaches, and the actual landings - took place under favorable weather conditions.

The weather continued satisfactory for the landings at Apamama on 21 November, and for all reconnaissance and landing activities in the remainder of the group on succeeding days. Throughout November, there was little change in the generally good weather conditions. Showers were observed on the 25th, the 27th, and the 29th, but these were local in nature, and not related to any unfavorable weather development.

The Commander, Central Pacific Force, in his report of the operations in the Gilberts, stated, "Weather conditions throughout were unusually favorable."

The weather requirements for the operation - satisfactory landing and flying conditions - were more than fulfilled. The southeast 12 knot wind, although giving the requisite light surf at the major assault points, was sufficient to facilitate the operation of carrier aircraft. Fair weather throughout the operation made it possible to attack any of the islands from the air. Unlimited ceiling and visibility allowed continuous bombing, strafing, and photography.

1. In addition to being north of its normal position, the equatorial front was also more active than usual. Thus, with weather over other Japanese bases unfavorable for air operations, air resistance was less than expected.

2. The southward motion of the equatorial front interposed a region of bad weather between the enemy and our new bases during the early part of December. Thus, our forces enjoyed some protection from enemy air strikes.

From the standpoint of weather considerations, the timing of the occupation of the Gilberts in relation to the major operation against the Marshalls was excellent. With the movement of the

Equatorial Front into the Southern Hemisphere, weather conditions in the Marshalls improved rapidly during December. This permitted the full employment of our air power in the preliminary phase, and favored the employment of a large amphibious force in the final phase of the occupation of these islands.