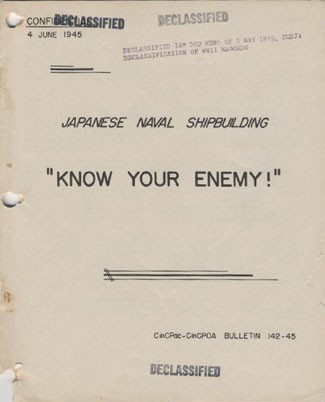 Information from official sources is now available on the details of Japanese Naval shipbuilding from early 1941 almost to the end of 1944. Captured documents had previously provided a complete list of official Navy announcements of new construction and conversions (TATSU) from 5 February 1941 to 10 May 1944. Additional documents, captured on Iwo Jima, have carried the list as far as 25 October 1944.

These TATSU are believed to be authentic and practically all-inclusive. Of the warships definitely known, from other sources, to have been built or converted during this period, only the converted CVLs Ryuho, Chitose. and Chiyoda. fail to appear on this list. Their omission is unexplained.

In the following pages the contents of these TATSU are presented, arranged by type and by the shipyards which did the construction. They are also presented graphically according to type and date of construction. Three salient points emerge from this analysis:

(1) Construction of fleet units has concentrated overwhelmingly on carriers, with a notable deficiency of both heavy surface units and fleet type destroyers.

(2) Beginning in 1943, a tremendous proportion of warship construction has been devoted to escort vessels.

(3) Major shipbuilding has been carried on entirely in the home islands, with the bulk of it concentrated in a few shipyards in the great industrial areas of Japan.

In referring to the TATSU it is important to remember that the date of announcement simply indicates that the ship was under construction at that time. There is no fixed correlation between this date and the date of completion. A destroyer ordinarily is in service within two or three months of its announcement. With larger ships the time lag is greater, and with smaller ships it is less.

For purposes of graphic presentation the rate of construction for the last two months of 1944 has been estimated wherever practical.

This supplement comprises an enlargement and revision of an article on Japanese Naval Shipbuilding which appeared in CINCPAC-CINCPOA Weekly Intelligence, Vol., 1, No. 13, 6 October 1944. Except as specifically noted it is based entirely on the TATSU.

The building program for major warships from 1941 to 1944 shows an overwhelming emphasis on carrier construction. During this period the Jap Navy announced:

(1) Eight large carriers either built as carriers from the keel up or converted from warship hulls at an early stage.

(3) One CVL converted from a submarine tender.

In addition, Ryuho, Chitose and Chiyoda are believed to have been converted to CVLs during this period, although no announcement of such conversion was issued.

No battleships were announced as building during this period. The Yamato had previously been announced on 25 July, 1940. The date of Musashi's announcement is not known.

Only one heavy cruiser, the Ibuki, appears in this list. There has been some indication that even this ship was finished as a CVL rather than a CA.

Five light cruisers have been completed during the war. Agano, Noshiro, Yahagi and Sakawa belong to the Agano class. Oyodo forms a separate class. These ships have been used chiefly as DesRon flagships. All of Japan's pre-war light cruisers were small, lightly armed, and particularly deficient in AA defense. New construction has been on a scale inadequate to replace those obsolescent vessels.

In short, Japan's wartime building program has been lopsided. By concentrating on carriers she achieved what was once a formidable carrier force. At the same time, however, she failed to achieve a balanced fleet. Her carrier forces have never been backed by a large group of fast modern battleships, and her light screening forces have become fewer and fewer. 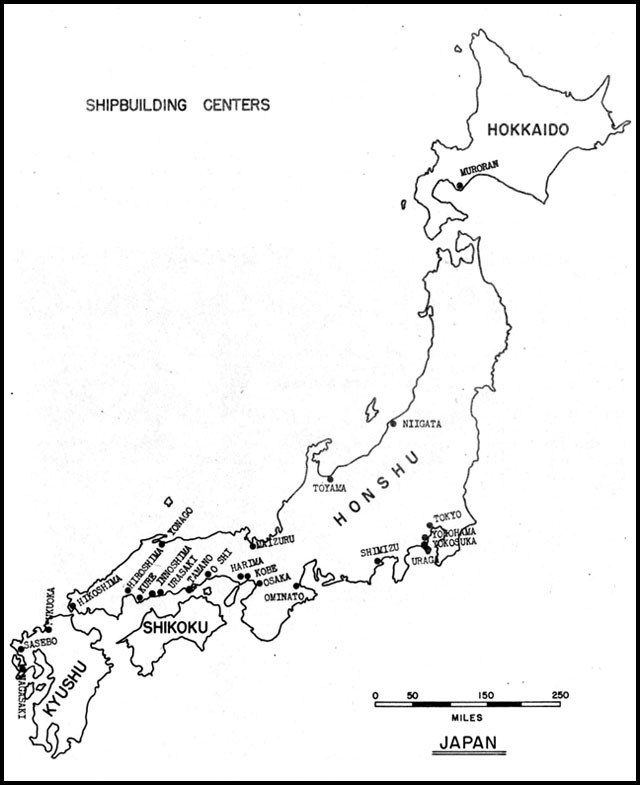 It is reliably estimated that from the start of the war until the end of 1943 the enemy lost approximately 55 destroyers. During this period planned construction as reflected in official announcements totalled only 23 units. No significant increase in the rate of construction appeared, even in comparison with the pre-war 1941 rate.

To close this ruinous gap between loss and construction, the Japs resorted to building 1000-ton Matsu Class ships at the expense of fleet destroyers. During 1944 they announced an estimated 26 destroyers, 21 of the Matsu Class and only 5 of them fleet types. Even this effort failed signally to preserve the destroyer force, as the rate of loss doubled simultaneously. At least 55 destroyers are thought to have been sunk during 1944. 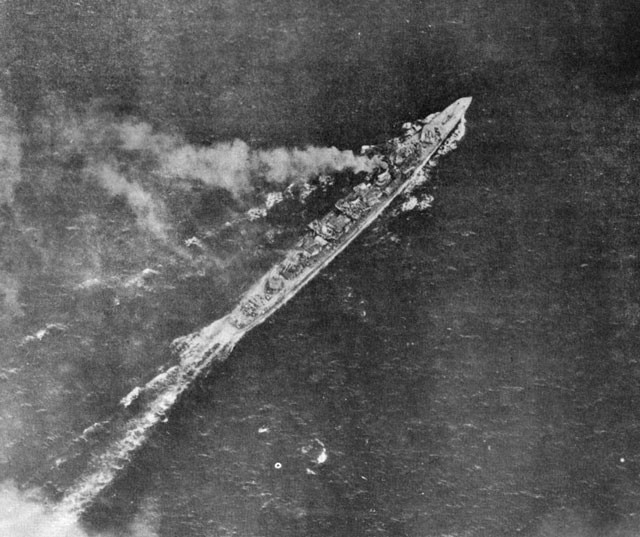 The rate of Japanese submarine construction has remained uniformly high. From 1941 through 1944 the enemy announced new construction of an estimated 114 submarines  exactly twice the number of destroyers announced in the same period.

Emphasis on type has shifted considerably. About half of the four-year total consists of large I-Class ships. During 1942 and 1943 nearly half of the subs built belonged to the medium RO-Class. During 1944, however, only one RO-Class ship was built. Instead, the new, small HA-Class subs were announced in considerable numbers. 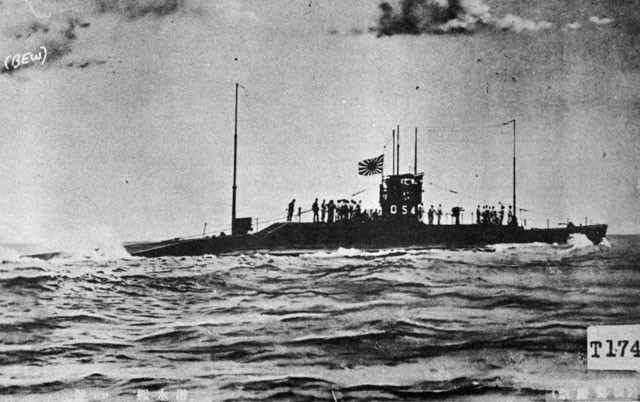 The escort vessel program absorbed a tremendous proportion of Japan's total building effort during 1943 and 1944. This concentration on building escort types, necessitated by the success of our submarine warfare, was a major factor in the decline of the Japanese Navy. At a time when they were losing two destroyers for every one they were building, the Japanese were forced to give highest priority to the construction of subchasers and KAIBOKAN. By October 1944 the screening forces of the Japanese fleet had become seriously inadequate.

A notable feature of the escort building program was the shift of emphasis from the short-range subchaser and special subchaser types to the larger escorts (KAIBOKAN). Originally the Japanese depended largely on destroyers for long-range convoy escort. This practice proved costly and ineffective. The various classes of KAIBOKAN were designed to provide deep-water protection for medium and high speed convoys. 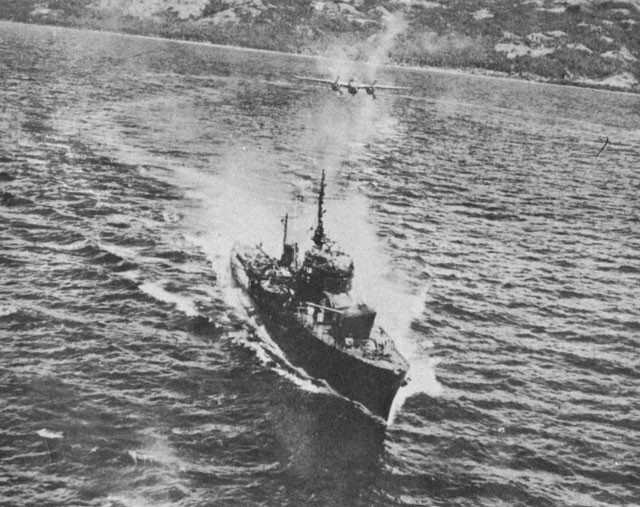 The original classes of Japanese MTB laid down in 1941 were experimental and evidently unsuccessful. All but one of these boats have been scratched from the Navy list. Construction of MTB was suspended during 1942. However, the enemy was evidently impressed by the success of American PT boats. In the latter half of 1943 he began an ambitious building program for this type, and by the end of 1944 had laid down nearly 600 boats.

Japanese MTB have seen little action in the war. Presumably large numbers of them are being held in the Empire for suicidal defense against invasion.

HAYABUSA boats are similar to MTB, but carry more guns in place of torpedoes. For a discussion of Jap MTB types, see "Weekly Intelligence", Vol. 1, No. 13. 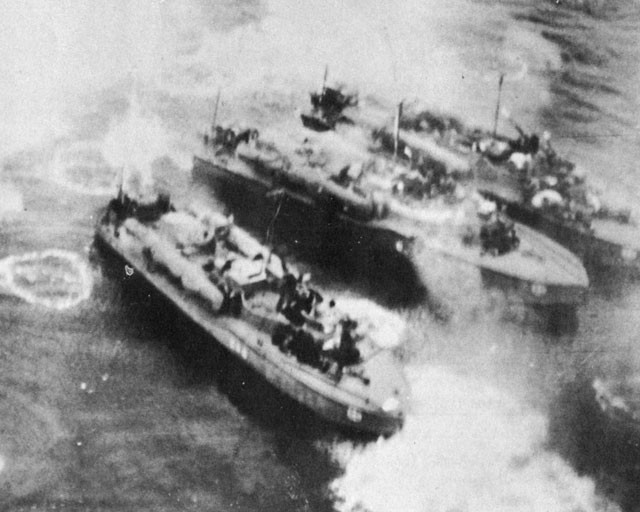 It is notable that the Japanese building program for minecraft fell off to nothing during 1944. Presumably U.S. submarine successes made the need for escort craft so pressing that more specialized types suffered. Actually, most escort types can be converted to minesweeping with little effort, so that the enemy's potential defense against mines may have suffered less than it would appear. Similarly, merchant ships and large escorts can be used as minelayers with little alteration. There is evidence that in actual practice the Japanese have used their minecraft and escort vessels interchangeably. 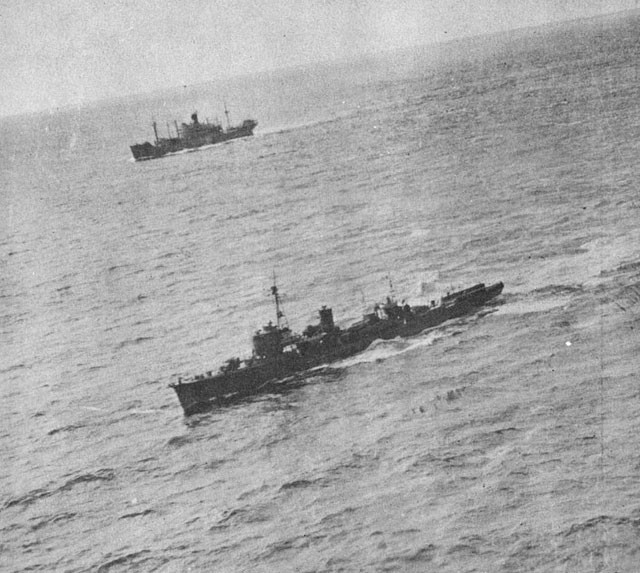 During 1944 the Japanese announced an estimated 20 APD and 45 LSM. (Dates of announcement of the LSM are not given, but they were probably all announced during 1944. Construction of both APD and LSM for the last two months of 1944 have been estimated from the prior rate of building.) These two types were designed to fill the need for small, moderately fast transports to operate in dangerous waters. Prior to our occupation of Iwo Jima, APD were frequently observed on transport runs to that island. These types have eased the burden on Jap destroyers, which were formerly depended on for fast operational transport.

Details are not in all cases available, but it is thought that the great majority of miscellaneous named auxiliaries which appear in the list are fleet oilers.

There is no announcement of the Ryuho, first believed operational in 1942, or of Chitose and Chiyoda, believed to have been converted during 1943.