Transcribed with Introduction and Notes by John G. Sharp

Introduction: This undated "Roll of Mechanics & Labourers Employed in the Navy Yard Washington" comprises nine pages of employees' names, occupations and per diem pay rates. These pages appear to have come from the work book of the Clerk of the Yard (Thomas Howard). Perhaps they were part of his master list of names, occupations and rates of per diem pay for Washington Navy Yard (WNY) employees which Howard kept and used in order to make out the daily muster logs. We owe the preservation and survival of this and the remaining early 19th century muster logs and pay rolls to chance and circumstance, for it was not until well into the 20th century that these precious historical records were moved from a basement at the Navy Yard to the National Archives and Records Administration (NARA).1 The surviving pages of this document have no date affixed to them but from internal evidence NARA believes this pay roll to have been compiled sometime between 1819-1820. The extent pages list 345 names of mechanics and laborers. Throughout much of its long existence the Washington Navy Yard had only a few permanently stationed naval officers such as Commandant Thomas Tingey and Sailing Master Marmaduke Dove. For much of its day to day management and supervision of the civilian workforce the Navy Department relied on master mechanics. Each trade had a master mechanic and these individuals were recognized experts in their specialty and each usually had many years of trade experience. Master mechanics were often salaried employees, in 1819, seven of them were paid at least $1,000 per annum.2 Master mechanics often supervised large numbers of employees. Within each Washington Navy Yard shop it was the master mechanic who gave overall work direction through the quarterman and lead man to the journeyman mechanic. Most importantly, master mechanics had the power to direct work and to hire and dismiss mechanics and laborers.

Next in the hierarchy came the quarterman, abbreviated on this roll as "Qman" (leader of several work crews), then the lead man (or crew leader), then the trade mechanics. The term mechanic in the early 19th century referred to a skilled tradesman who had successfully completed a five or six year trade apprenticeship in a particular field. Each trade had trainees or apprentices who were young workers in training. Each apprentice signed a binding legal agreement typically with a master mechanic to return designated service in exchange for being taught his trade. Laborers were below the mechanics and were unskilled men who performed heavy, but necessary work, such as digging, pile driving, and pulling or hauling of ships and ship parts. Slaves made up a significant but generally unacknowledged part of the Washington Navy Yard's antebellum workforce. At the WNY most African Americans (free and enslaved) were confined to unpleasant less skilled work (e.g. caulking or working in the anchor shop); this payroll does not specifically identify free or enslaved African Americans (there is evidence from the Diary of Michael Shiner) and the letters of Commodore Thomas Tingey that many of the slaves who worked in the Ordinary were omitted) however, where possible I have provided information regarding known WNY black employees in the endnotes. Even the most mundane of documents can change the way we perceive our past, and this roll surely may cause historical narratives of women's employment at WNY to be revised. The history of women in the Yard was until recently based on the now erroneous assumption that the first documented female employee was Almira V. Brown, a seamstress who was first entered on the rolls of WNY in 1864 however, transcription of this roll clearly reflects the employment of Betsey Howard as cart and horse driver circa 1819-1820.3

The years 1819-1820 were a time of ship building activity for the Yard employees, many of whom were assigned to work on the USSColumbus, a ship of the line which had an unusual design, so much so that she was found to draw too much water to pass over the bar at the eastern branch of the Potomac River, making it necessary to haul the Columbus over the bar. This evolution required the laborers of the Yard and all available hands. In all, this operation took over three days to successfully move the ship.4 For the WNY per diem workforce, a steady number of naval ships to build or overhaul, was key to employment. Typically, the supply of work followed the seasons, with the Yard taking on more mechanics and laborers in the spring and summer months, and the workers being laid off in the fall and winter as the cold weather, rain and snow made work in the open air impractical. Sometimes national economic issues directly affected naval appropriations and employment levels, and so it was that a credit crisis, which emerged in the business and banking sector rapidly spread to the economy leading to the end of a speculative bubble and the "Panic of 1819" and the first recession in United States history. As a result of a sharp decline in congressional appropriations for shipbuilding and repair, the next few years were marked by spread lay offs at federal and commercial shipyards.5 Within Washington, DC, sufficient work continued as the Frigate USSPotomac was built in 1820, but workers had to accept wage reductions, and as a result of these new economic circumstances, many fell deeper into debt which resulted in a widespread increase in those jailed in the District of Columbia for debt.6 Today these surviving WNY muster and pay rolls allow modern historians and genealogists to closely study the economic and social relationship of a fascinating and bygone era, and I believe they provide, as one historian has noted, a window "to be able to see the participants of the past in a comprehensive way in the context of their own time."7

Transcription Method:
This transcription was made from digital images of "Pay Roll of Mechanics and Laborers Employed in the Navy Yard Washington," (circa 1819-1820). These digital images were made at the National Archives and Records Administration, Washington, DC. As noted earlier, the exact date of this pay roll is uncertain and there is some evidence of the roll being incomplete and certain individual names appear more than once. In transcribing this listing I have striven to adhere as closely as possible to the original in spelling (calker for caulker), capitalization, punctuation, and abbreviation (e.g. "Do" or "do" for ditto or same as above), including the retention of dashes, ampersands and overstrikes. On the rolls, employees' names appear to be arranged by department. Where I was unable to provide a clear image or where it was not possible to determine what was written, I have so noted in brackets. Where possible, I have attempted to arrange the transcribed material in a similar manner to that found in the pay roll. All transcriptions of documents quoted from the National Archives and Records RG45 are mine. 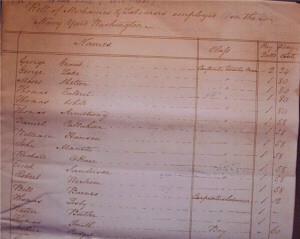 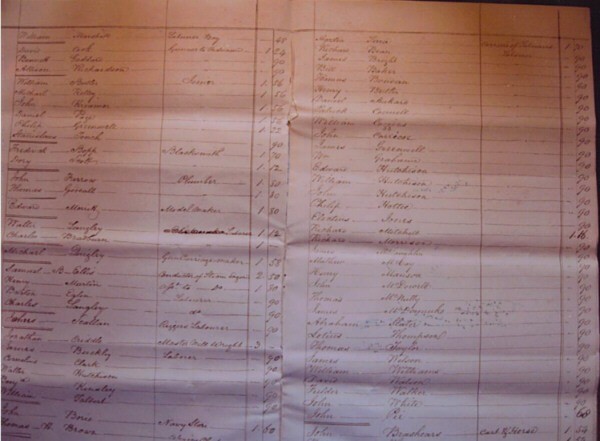 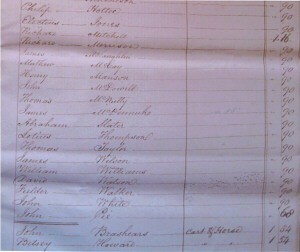 2 For the pay of WNY salaried employees for month of May 1819, see http://genealogytrails.com/washdc/wny1819.html.

3 For Almira V. Brown, see http://www.genealogytrails.com/washdc/bio_avbrown.html for an account of her life and career.

8 Sawyers sawed logs and large pieces of wood used to create staves, keels and bows of wooden ships. A Ship's carpenters couldn't carry out their trade without the sawyer supplying him with dressed and prepared lengths of different woods. Sawing of logs was often done in a pit by two men, the journeyman sawyer on top typically did the actual cutting for which he received higher wages, while an apprentice or laborer (Pit) literally stood in a pit to steady the log.

9 Edward Wayson was born in Maryland about 1771, he is listed on the 1860 census for the District of Columbia as a Blacksmith age 89. 1860 Census for the District of Columbia, Roll M 653_104; 651 Image 88, and is also enumerated on the Pay Roll of Mechanics and Laborers of July 1811 http://www.genealogytrails.com/washdc/wny1811.html and the listing of WNY employees for April 1829http://www.genealogytrails.com/washdc/wny1829.html

10 Luke Cannon is listed as a slave of Thomas Fenwick in a letter of Commodore Thomas Tingey to Secretary of the Navy Robert Smith dated 25 April 1808, but is listed as a Freeman on the Pay Roll of Mechanics and Laborers of July 1811 where he is enumerated as working in the WNY Blacksmith Shop.

11 Joe (also Jo) Smoot is listed as a slave of Alexandra Smoot in a letter of Commodore Thomas Tingey to Secretary of the Navy Robert Smith dated 25 April 1808.

12 Joe (also Jo) Thompson is listed as a slave of Walter Clarke in a letter of Commodore Thomas Tingey to Secretary of the Navy Robert Smith dated 25 April 1808. Thompson is also enumerated on the Pay Roll of Mechanics and Laborers of July 1811http://www.genealogytrails.com/washdc/wny1811.html , Diary of Michael Shiner page 22 entry for 1828 and WNY listing of employees for April 1829 http://www.genealogytrails.com/washdc/wny1829.html where Jo Thompson is listed as free and working as a striker in the WNY Blacksmith shop.

13 The Vermillion family had in addition to David, Dennis Vermillion and brother John Vermillion, was employed at WNY as a boat builder apprentice in 1812 http://www.genealogytrails.com/washdc/appind_vermillion_j.html

14 Frederick Bopp blacksmith, was from Germany and is also enumerated on the Pay Roll of Mechanics and Laborers of July 1811http://www.genealogytrails.com/washdc/wny1811.html, he is also mentioned in a 15 April 1817 letter from Thomas Tingey to the Board of Navy Commissioners, stating that "Fred Bopp, a blacksmith, a good hand (a German) has worked in the Yard from 1805- the five years of his application for citizenship will expire by the sitting of the June Court when he will obtain it."

15 Samuel B. Ellis, an Englishman , whom Benjamin Henry Latrobe, the Department of the Navy Engineer and noted architect who designed many of the buildings at WYN, helped to secure employment as the operator of the first WNY steam engine. Ellis began work at WNY in January 1811. The Papers of Benjamin Henry Latrobe Vol. 1 1805-1810 p. 910n3

16 Betsey Howard is possibly a relative of Thomas Howard who in the early Yard was Overseer of the Laborers and later Clerk of the Yard. Betsey Howard is the first woman to work at the Yard for whom we have documentation. Cart and Horse drivers were often expected to provide their own horse and wagon which were used to transport material about the Yard and greater Washington DC. See : http://www.genealogytrails.com/washdc/wny_hc_n1867.html for a further discussion of some later WNY female Cart and Horse Drivers.

Shiner, Michael. The Diary of Michael Shiner Relating to the History of the Washington Navy Yard 1813-1869. Navy Department Library online, transcribed with an Introduction and Notes John G. Sharp, 2007. [http://www.history.navy.mil/library/online/shinerdiary.html]

Tremian, Mary. Slavery in the District of Columbia: The Policy of Congress and the Struggle for Abolition. New York: G.B. Putnam's Sons, 1898.

Wood, Gordon S. The Purpose of the Past Reflections on The Uses of History. New York: Penguin Press, 2008.