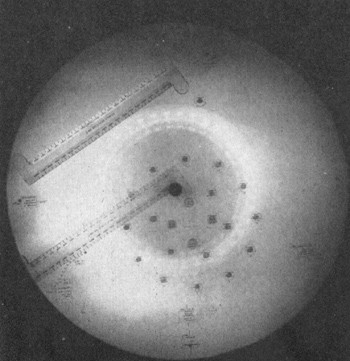 Accurate reading of ranges and bearings directly from the VG unit has been facilitated by cursor scales designed by CIC [Combat Information Center] personnel of the USS Duluth. The scales are designed to rotate about a fixed pivot in the center of the VG plotting surface. The fixed pivot, fabricated of brass by ship’s machine shop, consists of a disk 1 inch in diameter with a peg of 1/8-inch diameter and 1/8-inch high in the center. The disk is 3/32-inch thick at the base of the peg and tapers to a feather edge. A very small hole is drilled in the top of the peg to receive a compass point when concentric circles are drawn on the plotting surface. The disk is cemented at the center of the plotting surface as determined from the true north bearing circle. A thin coat of liquid plastic (plexiglass scraps cut with solvent) has proved the most satisfactory cementing material for holding the brass disk on the polished glass top.

The scales, fabricated from ¼-inch plexiglass, are 14 inches long. The zero marks start 1 inch from the ends. The linear graduations are made on basis of 3 inches equals the distance between two of the electronic range circles. The sweep length on each range scale of the VG unit can be adjusted to meet this condition. This results in reasonably accurate ranges over the entire range at which the unit is normally operated. A 1-inch projection normal to the axis of the scale at the zero marking permits the scale to be rapidly engaged on the fixed pivot. A hole (1/4-inch diameter) at the zero mark engages the fixed pivot so the scale can be rotated freely by the slight pressure against the pivot. Slight pressure away from the pivot disengages the scale. The fixed pivot projecting above the plotting surface causes interference with the rolling rule but this interference is overcome simply by bringing ruler up to pivot, making small mark at the outer end of ruler, lifting ruler to other side of pivot and lining it up with the mark (making due allowance for thickness of peg) – then proceed with operation.

The use of these scales also permits rapid determination of course (relative) and speed of surface contacts being tracked. With own ship on steady course a skilled operator can easily track 10 contacts simultaneously and determine their relative course, speed, point of closest approach, and time thereof. The scales have also proved satisfactory for tracking of air contacts.

When steaming in formation the VG is normally operated on the 10-mile range. The entire task-group formation is very carefully laid out with our own ship at center. Circles are drawn at each assigned station and these circles carefully identified with ship’s true name and her voice call. As long as the pips show under the assigned circles the ships are on station. If all pips start to move out of assigned circles own ship is getting off station. The ranges and bearings of all pickets and other task groups in the area are also shown on the plotting surface. This system has proved very satisfactory aboard this vessel.

The scales were designed aboard this vessel and were fabricated by the RMO [Radio (radar) Material Officer] at the Norfolk Navy Yard. Although this vessel has a separate scale calibrated on both edges for each range setting of VG it is believed feasible to combine two range markings on same scale e.g., 10- and 20-miles on same unit.