Remarks on Protection of a Convoy by Extended Patrols 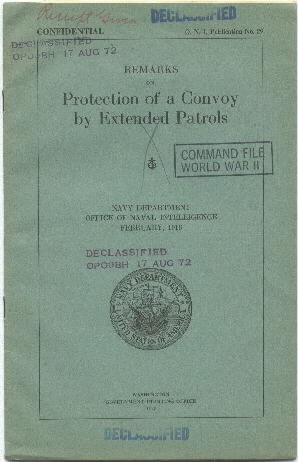 This pamphlet is a reprint of a confidential British publication. It is very important that this information should be kept confidential, and no person below the rank of commissioned officer is to be allowed to examine it except by permission of the commanding officer, in the case of persons in the Navy who may require knowledge of its contents in the performance of their duties.

This book is for the use of officers generally, and may, in certain, cases, be communicated to persons in His Majesty's service below the rank of commissioned officer who may require to be acquainted with its contents in the course of their duties. The officers exercising this power will be held responsible that such information is imparted with due caution and reserve.

REMARKS ON PROTECTION OF A CONVOY BY EXTENDED PATROLS.

In these remarks the term "extended patrol" is used with reference to patrol vessels stationed at such a distance from the convoy that they can see the masts and funnels of the convoy above the horizon in clear weather, i.e., a distance of about 11 miles, or, when the visibility is less than this, within sight of the ships of the convoy on which they are stationed.

The objects of employing an extended escort are:

NOTE.--This may occur in clear weather, especially with a trawler patrol, since enemy submarines frequently do not take the trouble to dive on sighting trawlers.

It is also very likely to occur when the visibility is low or when it is "patchy," as submarine and patrol vessel may suddenly find themselves in full sight of one another.

Before deciding on the best position, it is necessary to consider the submarine's diving capabilities, since these govern the angle on the bow within which a diving submarine is dangerous.

It must also be remembered that whatever positions are adopted they will become known to the enemy before long, since a number of attacks must occur in which the submarine will sight both the extended patrol and the convoy and be able to note their relative positions.

A large number of patrol craft being now employed on escort work, enemy submarines in open waters are not very much harassed, and it must be assumed that their batteries are usually fully charged.

Also, they know that their chances of getting in an attack are fewer, and they will exert themselves more to make the most of any opportunity for attack.

It is, therefore, considered not too much to assume that enemy submarines can travel 7 miles in the first hour submerged, and still have in reserve sufficient battery power with which to escape if hunted.

Assuming the convoy's speed of advance to be 7 1/2 knots, the depth of a column to be three ships, i.e., half a mile, and considering a browning range of 3,000 yards, the danger angle, if the visibility of the convoy to a submerged submarine is 7 miles, is 71 degrees from ahead of the wing columns.

As the "visibility submerged" decreases, the danger angle increases until the limit is reached, at which the submarine is within browning range when she sights the convoy.

The table on page 5 gives the danger angle for various speeds of convoy and visibility worked out on the foregoing assumptions.

Referring to the diagrams, the area (AAXY) within the danger angle, and ahead of the convoy, is called the "Diving Danger Area."

Any submarine within this area will be able, whilst submerged, to sight the convoy and get in an attack.

It will be seen that the limits of this area depend on the visibility submerged and the danger angle.

Outside the diving danger area lies the surface danger area (BB) whose limits are determined by the distance at which the convoy is visible to the submarine on the surface. In Diagram I this is shown as 11 miles, but may be greater if the convoy includes unusually large ships, or is making much smoke.

Any submarine in this area will, if there are no extended patrols, sight the convoy and be able to get into position for attack.

The points X and Y are critical points and must be considered in deciding on the positions of the escort. If a submarine following up astern, or coming in from the flanks, having the convoy's masts and funnels in sight, but being herself unseen, can get ahead of these points she can dive in and attack submerged.

Submarines outside BB will not sight the convoy at all. Consequently, it is most desirable to cover as much of the area between AA and BB as possible with the extended escort.

Again, it is considered that the escorts should be stationed outside the Diving Danger Area. If within it, the enemy has only to adopt the simple plan of always diving in toward and getting in the wake of any single patrol vessel sighted, to be sure of always getting

within striking distance of the convoy. The position of the extended patrol should therefore satisfy as far as possible the following conditions :--

(a) The critical points X and Y should be guarded.
(b) As much as possible of the area between AA and BB should be kept under observation.
(c) The patrol vessels should be outside the Diving Danger Area.

Taking 6 miles as the minimum distance at which a submarine must submerge to avoid being seen by a patrol vessel, the positions (P1 and P2) in which the patrols should be stationed are fixed by the foregoing conditions within narrow limits.

These positions, for various speeds of convoy and visibilities, are given in the following table:

TABLE GIVING POSITIONS OF EXTENDED ESCORTS AND DANGER ANGLES FOR DIFFERENT VISIBILITIES AND SPEEDS OF CONVOY.

This table is based on the following assumptions:

The position submarine has to reach is 3,000 yards abeam of the last ship of the wing column in order to get a chance of a reasonable browning shot.

Depth of column = half a mile.
Maximum average speed of submarine = 7 knots.
Maximum distance she can travel at this speed = 7 miles.

NOTE 1.--If the atmosphere is abnormally clear the visibility submerged may exceed 7 miles. Points X and Y will be farther out, and the Diving Danger Area will be extended in consequence. Under these circumstances, extended patrols should be farther away from the convoy, but on the same bearing as for visibility of 11 miles.

NOTE 2.--If the number of escort craft available permitted, it would be desirable to have a patrol stationed right ahead of the convoy as at P 3 in Diagram I.

The value of a patrol in this position would, however, depend on the chance of her sighting the submarine before she dived; and this chance is least in clear weather.

It will be noted that as the visibility decreases the patrols at P1 and P2 close in nearer the convoy, and the areas each has under observation approach each other until at 6 miles' visibility (Diagram II) practically the whole of the Diving Danger Area (which has decreased in proportion) is under observation.

This may be considered under two heads:

(a) Number of attacks prevented by the submarine being forced to dive whilst still out of reach of the convoy, or being prevented from steaming round it from a position abaft the beam.

This number will probably never be known, and theory must be taken as a guide.

The proportion of attacks that theoretically will be saved by extended escort is given by the proportion of the distance between AA and BB to the stance BB in the diagrams.

About 28 per cent of the attacks possible without an extended escort will be prevented in all visibilities above 6 miles. With lower visibilities the percentage decreases as the visibility through a periscope more nearly approaches that on the surface.

(b) Number of attacks prevented by the patrol actually sighting the submarine before diving.

Since British Atlantic convoys were first instituted, up till October 18, 1917, nine cases have occurred in which a submarine has been sighted on the surface by the convoy escort (escort in various positions), and in none of these cases was the submarine able to deliver her attack.

In the same period 17 attacks were made in which torpedoes were fired at the convoy, with or without success. The number of such sightings may be expected to decrease in proportion to the number of attacks as the enemy acquires more skill and begins to realize the number of opportunities he has lost.

RELATIVE VALUE OF T. B. D.'S AND TRAWLERS AS EXTENDED ESCORTS.

Considering the relative value of each as extended patrols:

(1) Reserve of speed allows a more pronounced zigzag to be carried out if required.
(2) Better look-out is generally kept.

(1) Superior value as an escort for preventing torpedo attack is not made use of.
(2) More easily seen in clear weather and more respected by submarine; consequently less chance of sighting on the surface, except when visibility is low.

(1) Range of vision almost as good as in T. B. D.'s.
(2) At present enemy submarines are inclined to treat trawlers with contempt, and frequently do not dive if it is not convenient to do so.

SUGGESTIONS AS TO WHEN EXTENDED ESCORTS SHOULD BE USED.

It is considered, at present, that vessels employed as extended escorts stationed at P1 and P2, as given in the table (p. 7), are more usefully employed than when used as a screen against long-range browning shots. 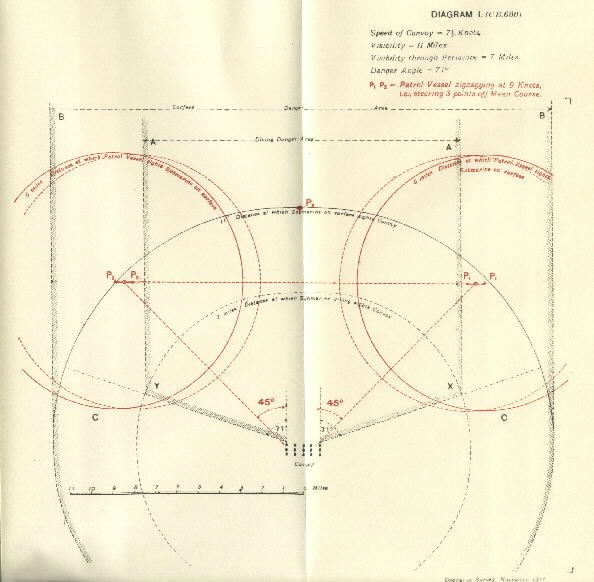 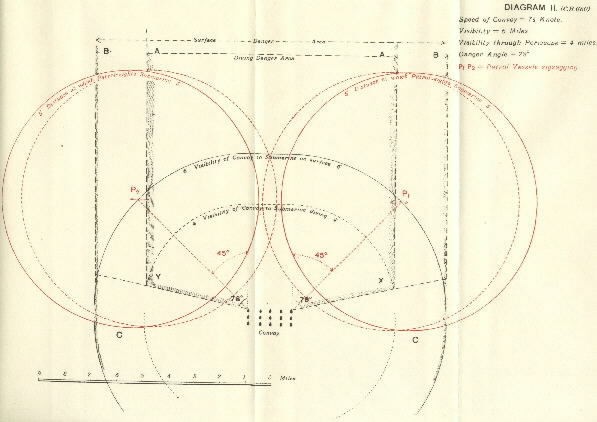 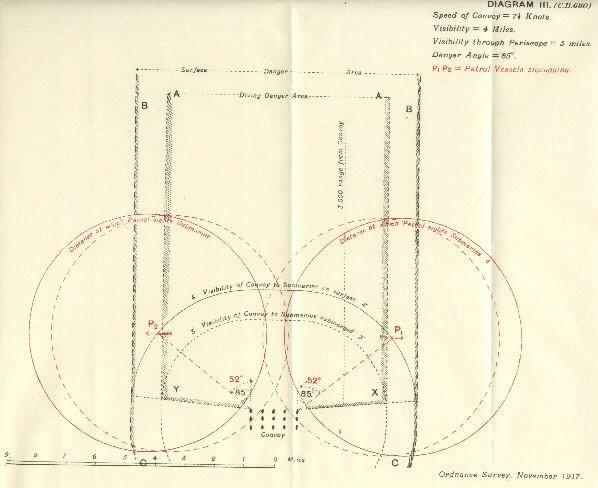 Whether extended escorts should be used must depend on the numbers available after the minimum requirements for close escort have been met.

The minimum number for close escort is considered to be as follows (vide diagrams in C.B. 620):

If only one T.B.D. is then available she should be stationed at P1 or P2, unless the visibility is less than about 3 miles, when she should zigzag across the path of the convoy.

If the convoy is straggling and the columns cannot be kept as close as 4 cables, the senior officer should use his discretion as to stationing the whole of the escort available in the close escort positions.

If the escort force is a composite one, i.e., T.B.D.'s and trawlers, trawlers should be stationed in the extended escort positions.

Extended escorts should not be used when the path of the convoy is being effectively covered by aircraft.