In July of 1944, the USS Independence started operating as a night carrier after the qualification of her night air group. This immediately brought to the forefront a series of problems for CIC which heretofore had not been encountered. At the present writing, the bulk of these have been ironed out, but it is believed that a discussion of them may be of value to future night carriers and air groups.

Inasmuch as night operations do not affect the use of the radars, enlisted operators and plotters carry on much as they did before, except that it was found necessary to have a few more men per watch. This was more the result, however, of new pieces of equipment, rather than the fact that we were operating at night. A watch in three is standard for the enlisted personnel, with a sufficient number being on duty to handle all contingencies. This does away with the necessity for an intermediate Condition watch. A General Quarters watch bill is provided, but in general, CIC efficiency is greatest with the routine watches, mainly because CIC is not filled with personnel who do not have much to do, and who merely serve to fill space.

The officer’s watch bill presented a greater problem, inasmuch as not all of the officers were qualified for night interceptions, thus necessitating a division between day and night. This was solved satisfactorily by running a straight watch in four with “day” officers, who conducted the routine CIC operations. At night, in addition to the CIC watch officer, a night qualified officer was placed in CIC in a supervisory capacity, and one squadron night controller was also on duty. Hence, at night there were three officers to handle intercepts or control planes airborne, and at the same time carry on routine CIC business. For exclusively night carriers, however, it is recommended that all CIC officers be qualified as night controllers. This CIC routine and the handling of aircraft could be carried on regardless of the time of day.

Interceptions at night are run directly from the remote PPI [Plan Position Indicator (radar scope)] scopes, which have been equipped with 12" tubes. The SK [Air search radar (shipborne)] radar is used exclusively

on the PPI scope, with the SM [Air and surface search radar, giving altitude of aircraft directly] furnishing altitude information, and rate of close of the night fighter when within contact range of the bogey. The advent of night controllers and the ease with which intercepts may be run from the scope, have reduced the use of the intercept plot tables. One of these will eventually be removed and replaced by another remote PPI, or VG [Plan Position Indicator (radar scope)] Projection PPI. The second intercept table is useful for computing and is equipped with a Craig Computer. A vertical plotting board is used for keeping a complete picture of the tactical situation, showing aircraft as well as positions of task groups and pickets, so that the night fighters may be kept at a safe distance from them.

A great aid to successful interceptions has been the setting of the G-band IFF [Identification friend or foe (radar)] to the SK frequency, so that it shows directly on the remote PPI scope. Since this has been done, there has never been any doubt as to which is the night fighter and which the bogey.

After a number of months of night flying in which varying numbers of night fighters were used, it was found that the maximum number of fighters that could be handled efficiently by one ship was two, and this number seemed to provide sufficient protection for the task group. The number is limited by the controllers and scopes available. At the present time with greater numbers of fighters airborne it was found necessary to turn control over to other carriers of the group.

Communications have been a constant problem in night operations. A night fighter without communications is not only useless, but presents the almost insoluble problem of getting him back to base, usually by resorting to an intercept.

After trying constantly to maintain good communications with only fair success, it was found necessary to install duplicate VHF [Very High Frequency (30-300 mc)] radios in each night fighter. Since this has been done communications have been very good, and a large part of the worries of CIC have been eliminated. For a night carrier, there should be installed, both on the carrier, and in the aircraft, the best possible VHF equipment. This point cannot be stressed too much.

Getting the planes back to the ship on a dark night or in bad weather to a point within visual range, has probably caused more "sweating it out" than any other single thing in CIC. The only solution has been to put a night controller on the scope to maintain constant control until the pilot reports, “See you.” Night flying planes should brought in on a vector somewhat to the side of the carrier, otherwise they may fail to see it and fly directly over, continuing on away from the ship. They should also be brought down while on the vector toward the ship and not afterwards, otherwise they are likely to drift away from base. It was very embarrassing to give a plane “Charlie” and find that he is no longer anywhere in the vicinity.

In addition to the YE [Aircraft radio homing beacon (Hayrake)] device, YG [Land-based radio homing beacon (called Mother by many shore bases)] and YM [radar beacon] equipments have been installed to make homing easier and all pilots should be trained to use it. The need for this training becomes critical where communications are bad. CIC must strive ceaselessly to improve lost plane procedure for use at night and to learn the best steps to take in overcoming various degrees of radio and radar failure. CIC’s worries will be lightened considerably if the difficulties are explained to the pilots and methods suggested whereby they can aid CIC in getting them back to base.

No Caption - view inside communications room.

As an aid to the pilot, during interceptions and even while orbiting on station, the fighter should be given frequent “steers” to base, so that in the event of his getting beyond radio range or in the event of complete radio failure, he will have some means of returning.

For the landing of aircraft at night, the visual fighter direction station is manned and “Snap” [Senior Naval Aviator Present] gives the planes their turns around the landing circle. This has been found very effective and the pilots appreciate the assistance. Snap is also useful in homing the planes when CIC no longer has them on the scope, due to their entering the sea return at minimum range.

signal officer’s platform and was used to track planes in the landing circle, with a view to setting up an ideal track on the short range scope. This would have proven most effective during very low visibility, since the planes could be kept on the track and turned at the proper points whether they were visible or not. The SQ short range, however, was too obscured by sea return for complete effectiveness.

In the three months that the USS Independence has been with the Fleet as a night carrier, operations have been successful and have proved beyond doubt the value of a night carrier. Seventy-five percent of the bogeys that have been in a position for interception have been shot down; the other twenty-five percent escaped because of lack of radar information or faulty altitude determination. Since the bogeys shot down were apparently search planes or “snoopers,” it is believed that “splashing” them has often prevented further night attacks

For the most part, the Japs intercepted have been very elusive, employing rapid changes of altitude and quick course changes. In several instances they have apparently detected the approach of the night fighter and turned away while the fighter was still 15 to 20 miles away. Many have dropped "window" in front of the night fighter, but were shot down, probably still wondering why the “window” did not protect them.

Correct Timing is the Key to Night Interception

With a bogey closing the force directly, interception must be initiated at a minimum range of 40 miles in order to allow sufficient time for the night fighter to be put on the bogey’s tail and to develop a contact before the planes get within firing range of the task group. The night fighter must use all possible speed in the early part of the interception, up to and including the cut-off vector, in order to speed up the interception and obtain a contact in the early stages when it is most valuable.

All operations to date have shown the basic training in night flying operations and in fighter direction to be sound. The lessons learned while in contact with the enemy have been largely amplifications of this training. 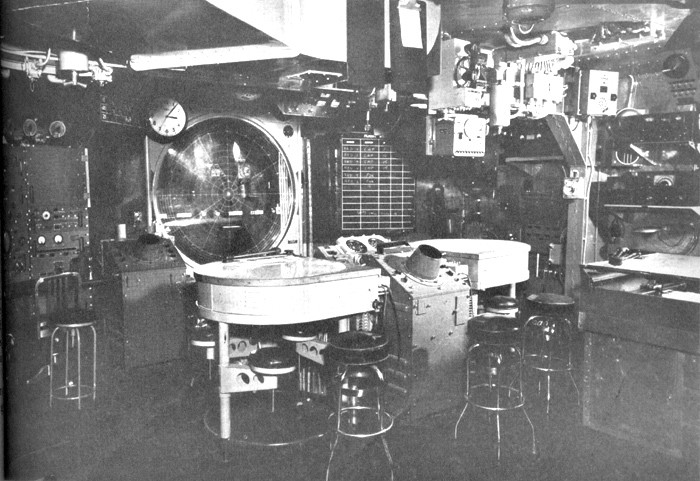 Action Corner in the Independence CIC.