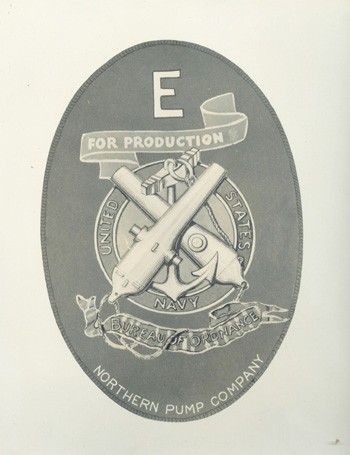 2.a. The award will consist of a pennant for the plant and emblems for all employees in the plant at the time the award is made. These will be paid for by the Department making the award.
b. The pennant will be swallow tailed, will have a white border, and will have a white capital letter E within a yellow wreath of oak and laurel leaves on a vertical divided blue and red background. ARMY will be on the red background and NAVY on the blue.
c. The emblems will have a capital letter E within a wreath of all silver oak and laurel leaves, and horizontal swallowtail wings divided in five - red, white, blue, white, red.

3. The Under Secretary of War has designated an Army Board for Production Awards to serve under the Director, Procurement and Distribution Division, Services of Supply, the duty of which is to formulate policies and rules governing nominations and awards, and to make final selections of award recipients from nominations submitted by the supply services and by the Matériel Command, Army Air Forces, and other production agencies.

5. Quality and quantity of production in the light of available facilities are the factors which will be given the greatest weight in selecting recipients of the award. Other factors to be weighed may include-

6. Nominations for plants doing War Department work will be handled in the following manner:

a. District procurement officers with the approval of the chief of the district will recommend the names of plants which in their opinion merit such awards. They will forward their nominations to the chief of their respective supply service or to the Commanding General, Matériel Command, in the case of Army Air Forces, together with sufficient data to justify their choices, including the reports of the local Army inspector.
b. The chiefs of the supply services and the Commanding General, Matériel Command, Army Air Forces, will study the nominations and will forward their recommendations to the Award Board for final action. The chiefs of the supply services or the Commanding General, Matériel Command, Army Air Forces, may also make initial nominations which they will forward with supporting data to the Award Board.
c. Recommendations for awards may be made directly to the Award Board by agencies concerned with production. Any awards granted to such nominees will consist of the Army-Navy pennant and emblems.
d. In the exercise of its discretion, the Award Board may prescribe other methods by which nominations and recommendations may be submitted to it.
e. The Award Board will consider the recommendations made to it and make the final selections.

7. The Award Board, upon reaching a decision to make an award and having cleared the award with the Incentive Division, Office of the Under Secretary of the Navy, which is similarly charged, will forward the name of the recipient, together with any special instructions which it may deep appropriate, to the Public Relations Branch, Services of Supply, which will be charged with all publicity and arrangements in connection with the award.

Representing only 5% of the estimated war plants in the nation, those plants meeting the stringent eligibility requirements ranged in size from a one-man plant to large corporations and included facilities that converted from peace to war production, as well as new plants built especially for war purposes. Both prime and subcontractors were eligible for and received the award. Approximately 50% of the Awards went to plants having less than 500 employees, generally considered as “smaller war plants”.

The Army-Navy “E” Award was granted only to facilities which were particularly outstanding in production for the War and Navy Departments. Excellence in quality and quantity of production were two of the determining factors in granting Awards. Others included: (a) overcoming of production obstacles; (b) low rate of absenteeism; (c) Avoidance of work stoppages; (d) maintenance of fair labor standards; (e) training of additional labor forces; (f) effective management; (g) record on accidents, health, sanitation, and plant protection: (h) utilization of sub-contracting facilities; (i) cooperation between management and labor as it affected production; and (j) conservation of critical and strategic materials.

For the Army, the nomination originated with the field procurement officer in closest touch with the plant. Thus, the field procurement officer of the service having the largest contractual interest in the plant, such as the Ordnance Department, Chemical Warfare Service, or other technical service of the Army, or the Army Air Forces, recommended a plant for the Award. From the local inspector or District Office, this recommendation was forwarded to the Office of the Chief of the Service for review prior to submission to the Army Board for Production Awards.

The Navy followed a similar procedure. The cognizant inspector or supervisor, such as the inspector of Naval Aircraft, the Inspector of Naval Material, the Naval Inspector of Ordnance, or the Supervisor of Shipbuilding, initiated the recommendation which was forwarded to the appropriate Bureau of the Navy Department for further review prior to submission to the Navy Board for Production Awards. The action of either Board had to be concurred in by the other Board before an Award was granted.

Plants which maintained an outstanding record of performance for six months after receiving the original Army-Navy “E” Award were granted a Star Award, indicated by a white star on their “E” flag. Additional stars could be won by continued outstanding performance for succeeding six-month periods until the flag carried four stars, after which the interval was increased to one year.

The final Awards were granted at the August meetings of the Army and Navy Boards for Production Awards and both Boards have subsequently been dissolved, 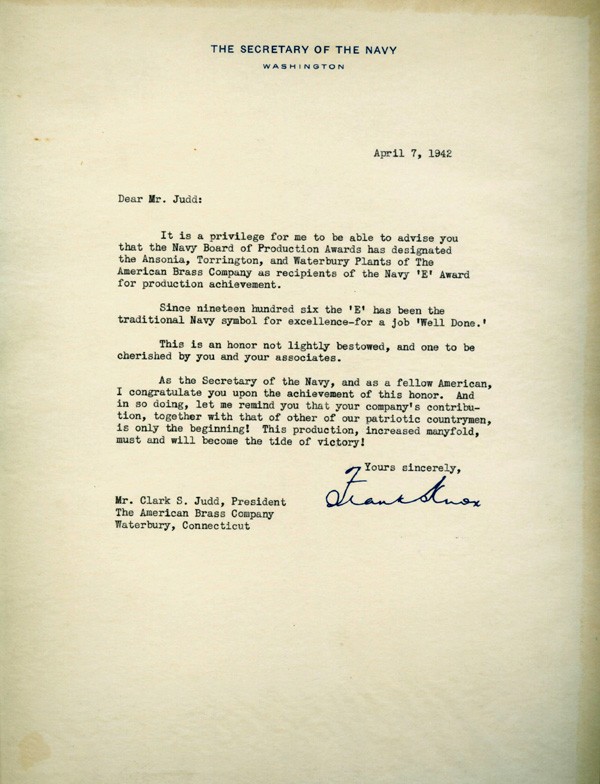 THE SECRETARY OF THE NAVY
WASHINGTON

It is a privilege for me to be able to advise you that the Navy Board of Production Awards has designated the Ansonia, Torrington, and Waterbury Plants of The American Brass Company as recipients of the Navy 'E' Award for production achievement.

Since nineteen hundred six the 'E' has been the traditional Navy symbol for excellence - for a job 'Well Done.'

This is an honor not lightly bestowed, and one to be cherished by you and your associates.

As the Secretary of the Navy, and as a fellow American, I congratulate you upon the achievement of this honor. And in so doing, let me remind you that your company's contribution, together with that of other of our patriotic countrymen, is only the beginning! This production, increased many fold, must and will become the tide of victory!