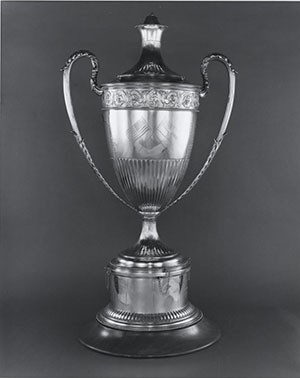 1. Summary. This MSG [message] provides background information regarding the Battenberg Cup, describes new award criteria, and requests that appropriate arrangements be made for presentation of the cup to the 1977 winner. End Summary.

rable value, measuring three feet high and 11 inches in diameter at its top, mounted on an oak pedestal. It dates to 1905, and is named for its British donor, His Serene Highness, Rear Admiral Prince Louis of Battenberg.

The Battenberg Cup. Also known as the British Challenge Cup, for decades was the symbol of rowing supremacy when crews of navy battleships and cruisers raced their one-ton, 30-foot, eight-oared cutters in vigorous competition against other crews.

Prince Louis of Battenberg had commanded a five-ship British armored cruiser squadron which made goodwill port visits to Annapolis, Maryland; Washington, D.C.; and New York City in 1905. The official American host during that visit was Rear Admiral Robley D. Evans, US Navy, who commanded the North Atlantic Fleet (now the US Atlantic Fleet).

Shortly after the British squadron returned home from that cruise, Prince Louis - who later gave up his German title and took the surname Mountbatten (he was the father of Lord Louis Mountbatten) - mailed the cup to Admiral Evans. The cup is engraved on one side with a dedication "to the enlisted men of the North Atlantic Fleet from their British cousins of the 2nd cruiser squadron

in grateful remembrance of the many kindnesses, tokens of good fellowship and wonderful entertainments that were given to them in cordial friendship by their comrades across the sea."

The names of the five British ships that comprised the 2nd cruiser squadron - Drake, Cornwall, Essex, Bedford, and Cumberland - are also engraved in the dedication. On the opposite side of the cup are engraved the national ensigns of the United States and Great Britain - the US flag of that era displaying 46 stars.

Prince Louis, in an accompanying letter, requested that the trophy become a challenge cup among the enlisted men of the North Atlantic Fleet. Admiral Evans, accepting on behalf of his men, then set up challenge rules for cutter racing, including a provision by which British sailors could compete with American sailors "in standard navy racing cutters...whenever a ship holding the cup would fall in with a British man-o-war."

Between 1906 and 1940, there were 52 challenges for the cup-each winning ship's name is engraved on the cup with the date of successful challenge - and only once did a British crew successfully challenge for it. That was in 1907, during the Jamestown Exposition at Norfolk, Virginia, when the crew of HMS Argyll, rowing a cutter 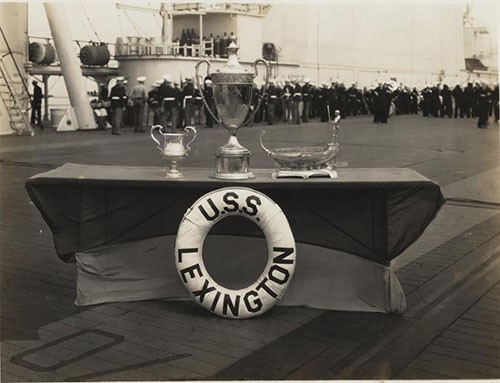 Available records indicate that there was only one other British challenge, and that one proved unsuccessful.

The last ship to win the Battenberg Cup was the battleship USS West Virginia in August 1940. Competition was interrupted during the years of World War Two, and never was resumed after that. Thus, a longstanding Navy tradition which fostered spirited competition in sporting excellence among ships' crews (some sailors reportedly would bet their last penny to back their ship's crew in a race) fell by the wayside.

With competition discontinued, USS West Virginia held the Cup until the ship was decommissioned in 1947. The Cup subsequently was displayed at several Navy commands, including the Navy Memorial Museum in Washington, DC, for the past 10 years.

In January, 1978, the curator for the Navy Department, Rear Admiral John D. Kane, Jr., US Navy (Retired), agreed that the Battenberg Cup should be returned to the Atlantic Fleet, from whence it came, to serve as a symbol of excellence.

US Atlantic Fleet, reinstituted the award of the Battenberg Cup as a symbol of extraordinary recognition within the Atlantic Fleet. The Cup will be awarded annually by CINCLANTFLT to the ship whose crew has most distinguished itself through outstanding performance in annual "Battle Efficiency" competition (comprising a series of exercised and inspections designed to evaluate the crew's potential performance in a wartime environment), as well as improvements and achievements in many other categories of operations, administration, and leadership.

The first ship to be awarded the Battenberg Cup based on the revised criteria is the fleet ballistic missile submarine tender USS Holland, which is homeported at Holy Loch, Scotland, in support of the Atlantic Fleet's Nuclear FBM Submarine Fleet. The award is for the 1977 calendar year.

USS Holland becomes the 53rd winner to have its name inscribed on the Battenberg Cup.

The Battenberg Cup was designed and manufactured by D&J Wellby, Ltd., London, England.

3. Following pertains to USS Holland's selection for the Battenberg Cup award for 1977:

USS Holland was selected from among three finalists by a special board of officers on the staff of CINCLANTFLT. The selection honors USS Holland at the best of the approximately 240 Atlantic Fleet ships in overall battle efficiency performance, combined with other extraordinary performance and achievements in its primary mission, and other areas such as personnel administration, career motivation and retention, engineering, safety, and morale.

Holland was previously the 1977 winner of a fleet "Golden Anchor Award" for excellence in career motivation and retention, as manifested by a 12-month overall retention rate of 67 percent; other awards for w[b]attle efficiency, engineering, and damage control; and has consistently been in strong contention for still other significant recognition. The ship has been particularly cited for the commendably high degree of command attention and crew involvement in its primary mission of maintaining a large portion of the FBM Submarine Fleet at peak material readiness.

4. For CHINFO: Extensive background on Holland's specific achievements is contained in Annexes II and III to the ship's command history (USS Holland LTR SER: 416 of 27 Feb 78, submitted to OP-09B9), if desired for "All Hands" or other feature story development.
BT
#9882

5. For USCOMEASTLANT: In behalf and in the stead of CINCLANTFLT, request you arrange an appropriate ceremony and present the award to USS Holland. CINCLANTFLT will coordinate transportation of the Battenberg Cup to the United Kingdom and advise ALCON of arrangements by separate correspondence. Additionally, REQ [request] you coordinate public affairs aspects locally, and provide details of award ceremony sufficiently in advance to facilitate CINCLANTFLT coordination of other publicity.
BR
#9883