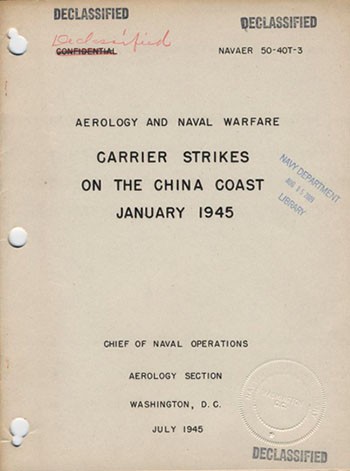 The significance of weather in these operations as noted in a review of action reports:

1. The Luzon Strait best fitted the overall strategy and afforded less chance of detection, but the currently stormy weather made passage on a fixed schedule problematical.

2. The China Sea weather was running regrettably true to form and forecasts.

3. Weather prevented the scheduled topping off of destroyers on the 10th but on the 11th fueling proceeded as scheduled.

BY THE COMMANDING OFFICERS OF CV's:

1. Again launched attacks at the same target area as had been assigned for the preceding operations. Bad weather, however, prevented any successful attacks this day.

2. Bad weather caused delay of return to the operating area off Formosa, but on receipt of favorable weather reports, on the night of the 20th the Task Force proceeded east through Balintang Passage.

3. A strong northeast monsoon and heavy seas made all fueling operations difficult.

On 3 January 1945 Task Force 38 began a series of air strikes against targets on Formosa and Luzon that were designed to continue both the "softening up" process begun weeks before, and to furnish support to the American landings of 9 January on the shores of Lingayen Gulf. The mission assigned the Task Force was to disrupt enemy communication facilities and destroy their supply lines by sustained air strikes against enemy aircraft, airfields, ground installations, naval forces and shipping. It was planned to accomplish this by alternate attacks of one to two days duration against Luzon and Formosa until 10 January, with additional support strikes to be made as necessary, subsequent to the landings on Lingayen Gulf.

THE STRIKES AGAINST FORMOSA AND LUZON

Task Force 38 arrived off Formosa on 2 January and launched strikes against important targets on that island, including the airfields on the west

central coastal plains. To reach these airfields it was necessary for our aircraft to cross the island at an elevation of over 13,000 feet in order to clear a range of mountains which are oriented in a general north-south direction and extend to that height.

That the effect of weather was severe is indicated by the COMMANDING OFFICER OF A CVL who states: "A cold front moved slowly across Formosa during the morning (3 January) and southeastward past the Task Force the following night. This front caused numerous squalls and heavy overcast conditions at the launching point all day. The pilots found it necessary to climb through the cloud deck on instruments before finally breaking into the clear at 10,000 feet. One torpedo plane disappeared in this climb and is missing. West of the mountains the cloud deck thinned out somewhat and had a few breaks. The ceiling over the targets averaged 4,500 feet during the day. Flying conditions in the launching area were unfavorable and only slightly better at the target. The afternoon strike was called back due to weather conditions".

The weather conditions on 4 January were in general a repetition of those existing on the previous day, as a result of which the pilots found it extremely difficult to rendezvous, having again to climb to 10,000 feet to get into the clear. Flying conditions over the target area gradually deteriorated during the day. With such undesirable flying weather the results of the strikes were not as effective as had been hoped or as had been anticipated, but the handicap of bad weather worked both ways since enemy aircraft which were not destroyed found it impossible to locate the Task Force and make retaliatory attacks. In addition, the Japanese were unable to use Formosa as a staging point to fly aircraft from the homeland to Luzon because the weather conditions in the entire area between the two points were extremely unfavorable.

On 6 January the Task Force had taken position off northeastern Luzon and launched strikes against southern Luzon airfields on that and the following day. During this period the weather was used as cover for the disposition. Good flying conditions prevailed over southern target areas on the 6th but the approach of the disturbance shown on Plate 1, 7 January, caused flying conditions to become more unfavorable at sea on the 7th. The striking groups were able, however, to reach Luzon targets despite the weather. Operations that had been scheduled against Formosa were cancelled, as stated by the COMMANDING OFFICER, USS San Jacinto: "The original plan for striking Formosa was abandoned largely due to unfavorable weather over that area. Clark Field on Luzon was made the target. Weather at the launching area was below average, but weather over the target was good".

The 9th of January again saw the Task Force launching strikes against Formosa targets but the passage of a sharp cold front (shown on Plate 3) caused continuation of the weather difficulties under which the Force had been operating. In his action report, the COMMANDING OFFICER, USS Wasp makes the following comment: "On 9 January, attacks were launched again at the same target areas as had been assigned for the preceding operations. Bad weather, however, prevented any successful attacks this day". 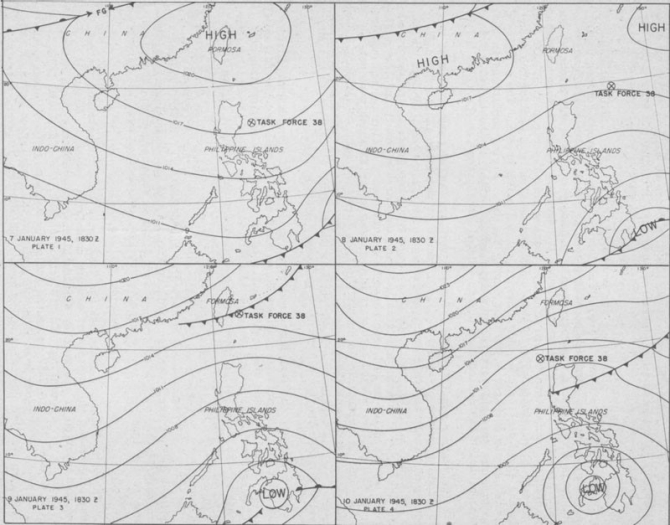 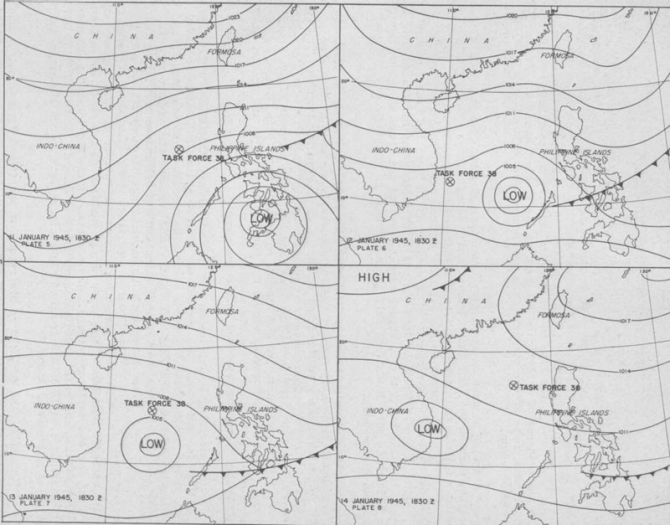 During the evening of the 9th of January departure was taken and course set for a position east of Camranh Bay, French Indo-China.

INVASION OF THE SOUTH CHINA SEA

On the night of 9 January the Task Force passed through Bashi Channel and into the South China Sea. The passage through the channel was uneventful and on the 10th search teams composed of fighter and torpedo planes conducted searches for a distance of 420 miles out from the disposition. The searches were continued on the 11th but on neither day were the searchers rewarded with any evidence of activity on the part of the elusive Japanese. Weather during this phase of the operation was good except for rather strong north to northeast winds.

Starting at dawn on 12 January Task Force 38 struck Saigon, Cap St. Jacques, Camranh Bay, Qui Nhow, Tourane and coastal convoys. During this period a typhoon had developed over Mindanao and moved west-northwest. As shown on Plate 5 this typhoon had reached its greatest development on 11 January as it began its travel across the Sulu Sea. On the 12th, although it had filled considerably it still had a tight, strong circulation and was close enough to the disposition to make its effect felt in an increase in wind velocity, rougher seas and higher swell.

Of the following two days COMMANDER TASK FORCE 38 states, "Retirement to the northeast to a 13 January fueling rendezvous was made at high speed, both to confound enemy searches and to escape an approaching typhoon. The typhoon passed to the southward (of Task Force 38), striking the Indo-China Coast and finishing off much of the enemy's crippled and beached shipping. Rough seas, caused by the typhoon's proximity, however, slowed the fueling on the 13th and necessitated use of most of the 14th to enable completion". Plate 8 shows the typhoon as practically dissipated over the Indo-China coast.

Formosa and the China Coast

In describing activities on the 15th of January, COMMANDER THIRD FLEET says, "The sea was rough, the weather was adverse and at 0300 COMMANDER TASK FORCE 38 recommended that the day's strikes be cancelled and the Task Force reverse its course. THE COMMANDER THIRD FLEET reviewed the weather reports and the tactical situation and determined that since the Task Force would be within range of enemy attack even though it reversed course, and since the holding down of Formosa the China Coast aircraft and attacks on concentrations of shipping were of major strategic importance, the group should continue to run north and endeavor to carry out the day's operations. The searches of the day located a Japanese weather station and radio installations on Pratas Island. COMMANDER TASK GROUP 38.5 launched a small attack group of night planes late in the afternoon and destroyed the installations."

COMMANDER TASK FORCE 38 in his report of operations carried out on the 15th and 16th states: "On 15 January Formosa was struck with secondary efforts

and searches directed at the Pescadores, Amoy, Swatow, Hongkong and the Hainan Area. To complete the devastation of the China Coast, Hongkong, Canton and Hainan were struck in force 16 January."

The following three days were spent in attempting to fuel. The Task Force moved to a point 200 miles west of Luzon on the 17th, planning to fuel at that point, but the strong effect of the northeast monsoon and the resulting high seas forced postponement of this operation. Intensification of the monsoon effect was producing northeast winds with velocities of 25 to 35 knots and very rough seas with a high swell. Low overcast skies with reduced visibility made flight operations difficult and at times impossible.

As stated by COMMANDER THIRD FLEET: "The aerologists's predictions were that the existing conditions of seas and wind would be present on the succeeding day and might continue for a number of days thereafter".

COMMANDER TASK FORCE 38, in describing the three days spent in searching for a fueling area, says "17 January was spent in rough weather, attempting to fuel, with indifferent success. 18 January proved even worse from a fueling standpoint; a run to the southward became necessary where at least a reasonably calm area was found 19 January under the lee of Luzon and fueling completed."

COMMANDER THIRD FLEET reports that on 19 January "A dispatch was received from the COMMANDER IN CHIEF, U.S. PACIFIC FLEET ----- directing that the Force remain in the China Sea until the weather improved to the degree necessary to leave via Balintang Channel."

Conditions improved somewhat on the 20th and that evening Task Force 38 made the run through the Channel and back into the Pacific Ocean. During the run the Force was attacked by several Japanese planes. Thus ended, in the words of COMMANDER THIRD FLEET, "a 3,757 mile cruise in the China Sea with the first carrier attacks on the China and Indo-China coast, cutting through the last sea route to Japan's southern empire."

Several conclusions may be drawn from the effect which weather had, or can have, on the operation of carrier based planes during an operation similar to the one described above. Attention is specifically invited to the following points:

1. A fast carrier task force having a variety of target areas to choose from has a high degree of adaptability to weather conditions.

3. Bad weather, while it may prevent combat flights by our forces, may

4. Strong winds (such as monsoon winds) in the Western Pacific frequently generate rough seas and high swell covering large areas and may make fueling difficult or impossible for periods of several days in succession.

5. With the effective utilization of meteorological advice, combat operations may be carried out even in close proximity to a typhoon.

6. Once entry is made into a semi-enclosed area, such as the South China Sea, while major control of the surrounding land area is in the hands of the enemy, weather becomes a vital tactical factor in determining when the Force can leave the area.

7. Topography plays an extremely important role in determining the weather which will prevail over land targets and is a factor which must be taken into consideration both in the planning and execution of attacks.