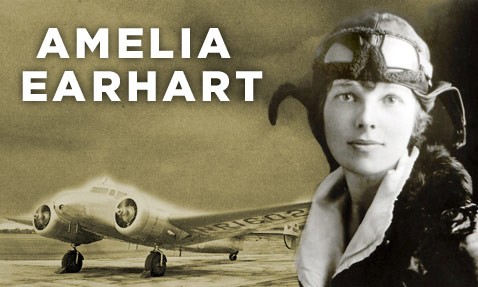 Amelia Earhart was born on 24 July 1897 in Atchison, Kansas. Her flying career began in Los Angeles in 1921 when, at age 24, she took flying lessons from Neta Snook and bought her first airplane-- a Kinner Airstar. Due to family problems, she sold her airplane in 1924 and moved back East, where she took employment as a social worker. Four years later, she returned to aviation bought an Avro Avian airplane and became the first woman to make a solo-return transcontinental flight. From then on, she continued to set and break her own speed and distance records, in competitive events, as well as personal stunts promoted by her husband George Palmer Putnam.

Earhart's name became a household word in 1932 when she became the first woman, and second person, to fly solo across the Atlantic, on the fifth anniversary of Charles Lindbergh's feat, flying a Lockheed Vega from Harbor Grace, Newfoundland to Londonderry, Ireland. That year, she received the Distinguished Flying Cross from the Congress, the Cross of Knight of the Legion of Honor from the French Government, and the Gold Medal of the National Geographic Society from President Hoover.

In January 1935 Earhart became the first person to fly solo across the Pacific Ocean from Honolulu to Oakland, California. Later that year she soloed from Los Angeles to Mexico City and back to Newark, N.J. In July 1936 she took delivery of a Lockheed 10E "Electra," financed by Purdue University, and started planning her round-the-world flight.

Earhart's flight would not be the first to circle the globe, but it would be the longest, 29,000 miles, following an equatorial route. On March 17, 1937 she flew the first leg, from Oakland, California to Honolulu, Hawaii. As the flight resumed three days later, a tire blew on takeoff and Earhart ground-looped the plane. Severely damaged, the aircraft had to be shipped back to California for repairs, and the flight was called off. The second attempt would begin at Miami, this time to fly from West to East; Fred Noonan, a former Pan Am pilot, would be Earhart's navigator and sole companion in flight for the entire trip. They departed Miami on June 1, and after numerous stops in South America, Africa, the Subcontinent and Southeast Asia, they arrived at Lae, New Guinea on June 29. About 22,000 miles of the journey had been completed. The remaining 7,000 miles would all be over the Pacific Ocean.

On July 2, 1937 at 0000 GMT, Earhart and Noonan took off from Lae. Their intended destination was Howland Island, a tiny piece of land a few miles long, 20 feet high, and 2, 556 miles away. Their last positive position report and sighting were over the Nukumanu Islands, about 800 miles into the flight. The U.S. Coast Guard cutter USCGC Itasca was on station near Howland, assigned on short notice to communicate with Earhart's plane and guide her to the island once she arrived in the vicinity.

But it soon became evident that Earhart and Noonan had little practical knowledge of the use of radio navigation. The frequencies Earhart was using were not well suited to direction finding (in fact, she had left behind the lower-frequency reception and transmission equipment which might have enabled Itasca to locate her), and the reception quality of her transmissions was poor. After six hours of frustrating attempts at two-way communications, contact was lost.

A coordinated search by the Navy and Coast Guard was organized and no physical evidence of the flyers or their plane was ever found. Earhart and Noonan's fate has been the subject of many rumors and allegations which were never substantiated. Modern analysis indicates that after passing the Nukumanu Islands, Earhart began to vector off course, unwittingly heading for a point about 100 miles NNW of Howland. A few hours before their estimated arrival time Noonan calculated a "sun line," but without a successful, radio-frequency range calculation, a precise "fix" on the plane's location could not be established. Researchers generally believe that the plane ran out of fuel and that Earhart and Noonan perished at sea.