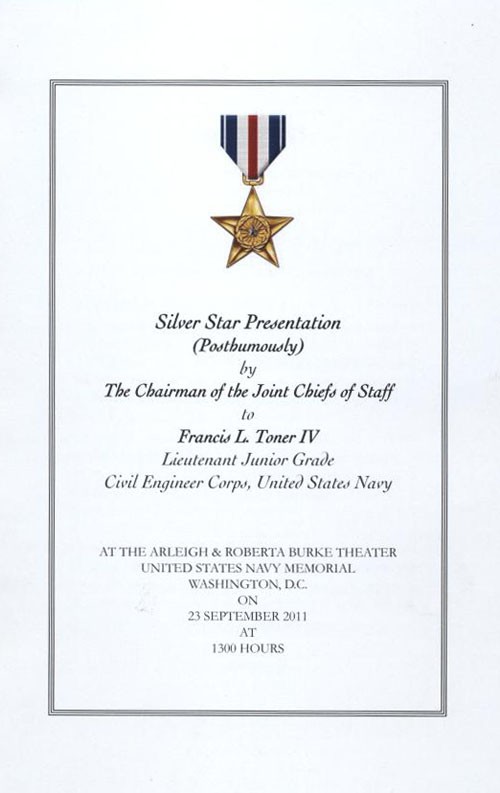 The Chairman of the Joint Chiefs of Staff 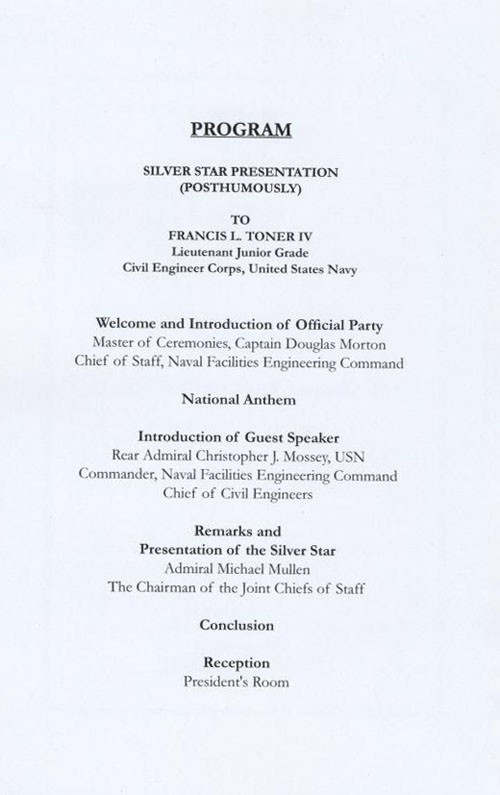 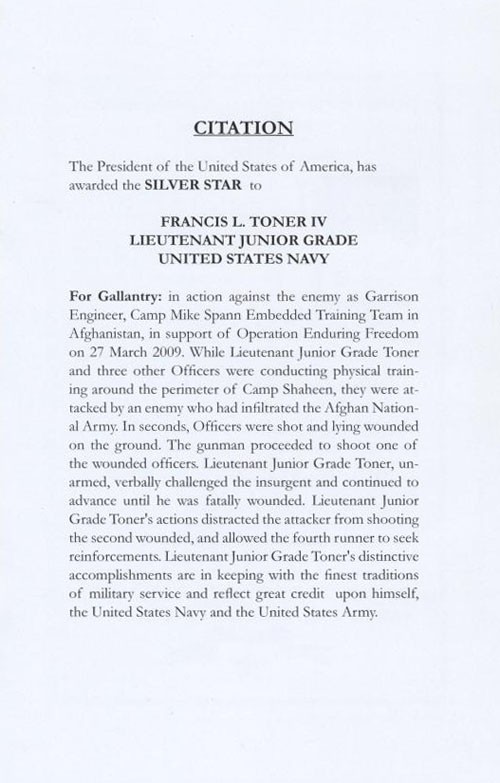 The President of the United States of America, has
awarded the SILVER STAR to

For Gallantry: in action against the enemy as Garrison
Engineer, Camp Mike Spann Embedded Training Team in
Afghanistan, in support of Operation Enduring Freedom
on 27 March 2009. While Lieutenant Junior Grade Toner
and three other Officers were conducting physical train-
ing around the perimeter of Camp Shaheen, they were at-
tacked by an enemy who had infiltrated the Afghan Nation-
al Army. In seconds, Officers were shot and lying wounded
on the ground. The gunman proceeded to shoot one of
the wounded officers. Lieutenant Junior Grade Toner, un-
armed, verbally challenged the insurgent and continued to
advance until he was fatally wounded. Lieutenant Junior
Grade Toner's actions distracted the attacker from shooting
the second wounded, and allowed the fourth runner to seek
reinforcements. Lieutenant Junior Grade Toner’s distinctive
accomplishments are in keeping with the finest traditions
of military service and reflect great credit upon himself,
the United States Navy and the United States Army. 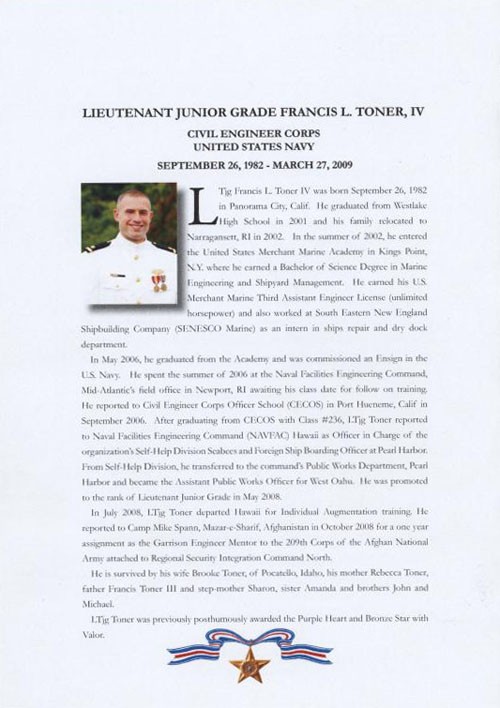 LTjg Francis L. Toner IV was born September 26, 1982 in Panorama City, Calif. He graduated from Westlake High School in 2001 and his family relocated to Narragansett, RI in 2002. In the summer of 2002, he entered the United States Merchant Marine Academy in Kings Point, N.Y. where he earned a Bachelor of Science Degree in Marine Engineering and Shipyard Management. He earned his U.S. Merchant Marine Third Assistant Engineer Licence (unlimited horsepower) and also worked at South Eastern New England Shipbuilding Company (SENESCO Marine) as an intern in ships repair and dry dock department.

In May 2006, he graduated from the Academy and was commissioned an Ensign in the U.S. Navy. He spent the summer of 2006 at the Naval Facilities Engineering Command, Mid-Atlantic’s field office in Newport, RI awaiting his class date for follow on training. He reported to Civil Engineer Corps Officer School (CECOS) in Port Hueneme, Calif in September 2006. After graduating from CECOS with Class #236, LTjg Toner reported to Naval Facilities Engineering Command (NAVFAC) Hawaii as Officer in Charge of the organization’s Self-Help Division Seabees and Foreign Ship Boarding Officer at Pearl Harbor. From Self-Help Division, he transferred to the command’s Public Works Department, Pearl Harbor and became the Assistant Public Works Officer for West Oahu. He was promoted to the rank of Lieutenant Junior Grade in May 2008.

In July 2008, LTjg Toner departed Hawaii for Individual Augmentation training. He reported to Camp Mike Spann, Mazar-e-Sharif, Afghanistan in October 2008 for a one year assignment as the Garrison Engineer Mentor to the 209th Corps of the Afghan National Army attached to Regional Security Integration Command North.

He is survived by his wife Brooke Toner, of Pocatello, Idaho, his mother Rebecca Toner, Father Francis Toner III and step-mother Sharon, sister Amanda and brothers John and Michael.