An assessment; direction to move 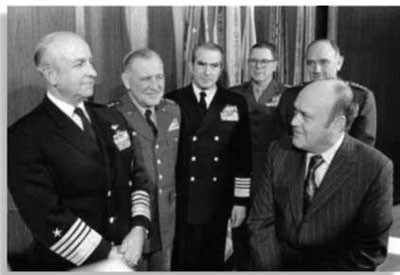 Sought to implement it throughout his term

Later, continued to write on US naval policy and strategy 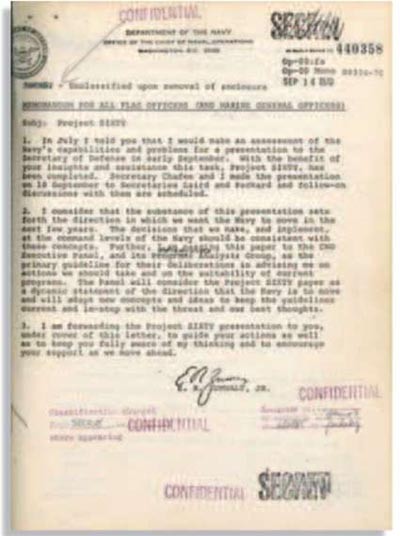 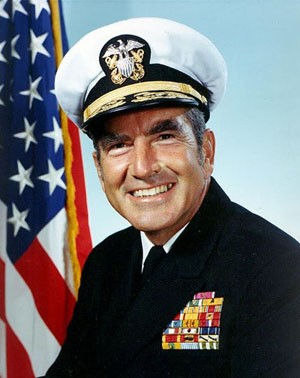 Criticisms (I)
"A non-Mahanian aberration" (Norman Friedman)
Too defensive and fearful
Too much focus on sea control vs. Soviets
Too little focus on power projection vs. Soviets
Sea control & power projection were actually intertwined, not bifurcated
Wrongly assumed Soviet priority to cut SLOCs
To abandon naval offensive would lose the fleet & the war

Criticisms (II):
A step backwards from focus on forward USN influence on events ashore
Wrong solutions to problems
Unaffordable
Led to tactical caution
Not well connected to national policy of detente
Not joint or allied enough
Too parochial (surface-warfare advocacy)
Too heavy on programmatics and too light on strategy
Not a consensual document. One man's vision

Influence on subsequent capstone documents
Set the example for all
Conceptual roots of Missions of the U.S. Navy
Triggered contrary views in Strategic Concepts of the US Navy
Studied for lessons leading to The Maritime Strategy
But spawned succession of CPPGs that refocused many in Navy away from strategy 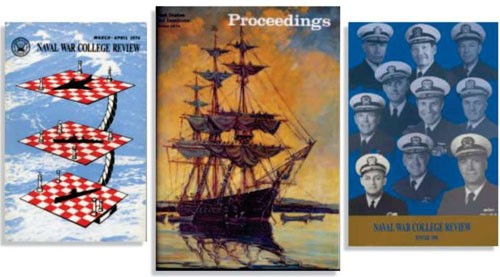 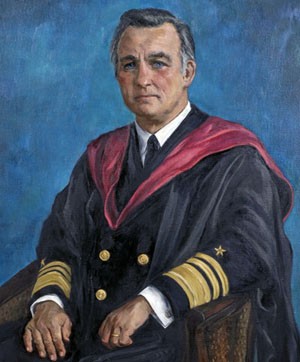 Why it was written
To get USN officers to think deeply about their service
To transform Navy internal thinking about what it does
To help naval officers understand what is best for the whole organization, not just their own platforms or programs
To focus the Navy on cross-cutting outputs (missions), vice parochial inputs (platforms, unions)
To inform future naval force structure decisions

To form a basis to establishing priorities for allocating resources
To assist in selecting the best among competing systems
Institutionalize Project SIXTY framework
Principal target: US Navy officer corps

Key ideas (II):
Each of 4 missions subdivided into "tactics"
Detailed & nuanced definitions & discussions of each

Key ideas (III):
"To force the Navy to think in terms of output rather than input"
(Key goal of McNamara-instituted PPBS since 1961-2)
Missions as "outputs"
Tied to national objectives
Interdependent
NOT prioritized
Tradeoffs within/among missions
USMC implements a few of the tactics 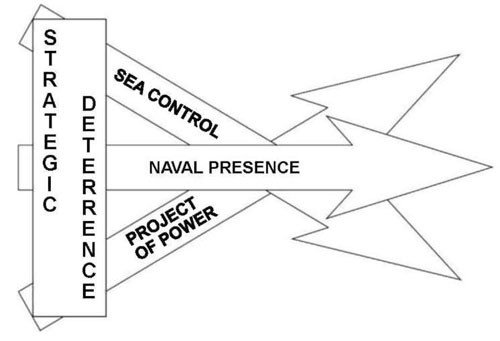 1. The task, together with the purpose, that clearly indicates the action to be taken and the reason therefore. 2. In common usage, especially when applied to lower military units, a duty assigned to an individual or unit. 3. The dispatching of one or more aircraft to accomplish one particular task.

"The terms 'roles, missions, and functions' often are used interchangeably, but the distinctions between them are important. 'Roles' are the broad and enduring purposes for which the Services...were established in law. "Missions" are the tasks assigned by the President or Secretary of Defense to the combatant commanders. 'Functions' are specific responsibilities assigned by the NCA to enable the services to fulfill their legally established roles."

Subsequent evolution of ADM Turner's thought
4 roles/missions of the Navy
Sea control
Projection of power by amphibious assault
Projection of power ashore by bombardment
Strategic nuclear retaliation
Today a new mission may be emerging
Defending the homeland or other land areas against attack by missiles through space
Setting aside homeland defense...The other four missions are today of lessening importance to our country's security 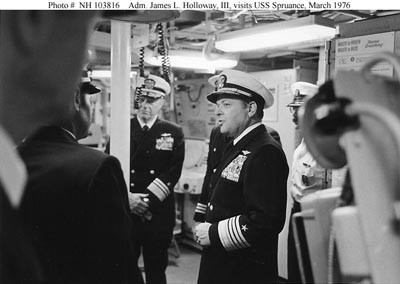 At end of his term, promulgated a final comprehensive statement

Memoir: Aircraft Carriers at War: A Personal Retrospective of Korea, Vietnam and the Soviet Confrontation (2007) 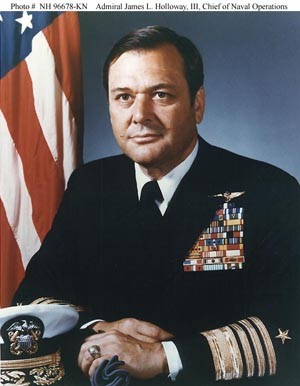 Why it was written (I)
So USN officers would understand basic USN concepts, doctrine & processes, in order to be able to contribute effectively to internal Navy decisions, make effective external cases for the Navy, and understand the implications of making changes
To lay out the capabilities of the US Navy in support of the nation, including aircraft carriers
Reaction to Project SIXTY & Turner "Missions" "Consolidation" of internal USN thinking, esp. "missions"
To emphasize warfare tasks over platforms
And in so doing highlight the versatility of the aircraft carrier

Discussed historical development of USN strategy & law of the sea

How it was written (I)
Personality: CNO ADM Holloway the driver
Saw importance of "writing it all down", himself
Advocate of direct senior involvement; not "completed staff work"
Advocate of standardized processes throughout his career
Denigrated fancy pictures and art work
Assisted by
Executive Assistant CAPT John Poindexter as sounding board
CNO Fellow
OP-60N (LCDR Joseph Strasser, Fletcher Ph.D.); 1-on-1 meetings
CAPT Dirk Pringle (OP-64) for "readiness" section

How it was written (II)
Unhappy with "4 Missions of the Navy," (which had informed his 1st Posture Statement & 1st US Naval Institute Proceedings article)
Continuously reworked his ideas, in various media
Added "readiness" section IRT perceived SECDEF Brown confusion on readiness terminology at Armed Forces Policy Council meeting
Published in final form as NWP 1 (Rev A) in May 1978
Saw it as a baseline. Ok to deviate from as required
"If you're going to break the rules, you've got to have rules to break"

Generation of A Naval Force Requirements

What was new? (II)
Capabilities-based threats
No mention of Soviets
Contrast with ADMs Zumwalt & Turner's approach
Mention of benefits to US of "a system of free & open trade"
Reference to a "system" will not reappear for 20+ years
NWP-Posture Statement similarity

Were they "strategic concepts?"

What is a "strategic concept" (officially)?
The course of action accepted as the result of the estimate of the strategic situation. It is a statement of what is to be done in broad terms sufficiently flexible to permit its use in framing the military, diplomatic, economic, informational, and other measures which stem from it

Criticisms
Too long & complex
Too dry & lifeless
Too generic, general & abstract
Too hard to update & keep current
Too "doctrinal"
All form & no substance
Did not convey a "story" or "narrative"
Not aligned with contemporary national defense policies Not the right vehicle to achieve internal USN consensus

Why did it have the influence it did?
Deep, personal involvement by CNO ADM Holloway
But ADM Holloway little known to defense academics Comprehensive
Wide distribution as internal USN NWP & external Posture Statements
But USN "wary of doctrine" limited buy-in by officers
Posture Statement format had short shelf life
Overshadowed by in Washington by Sea Plan 2000 debate
Superseded by The Maritime Strategy
Never updated 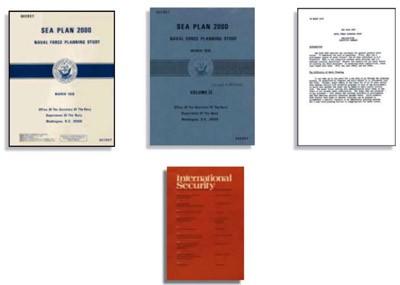 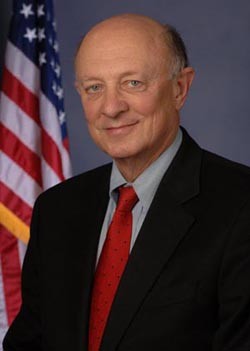 Why did it have the influence it did?
Strong SECNAV, Under SECNAV, VCNO, other USN leadership involvement & ownership
Most coherent & detailed compilation to date of Navy strategy views in current world & US policy context
Study format & study team composition limited buy-in by the fleet
Soon superseded by CNO ADM Hayward views & The Maritime Strategy (which incorporated many elements) 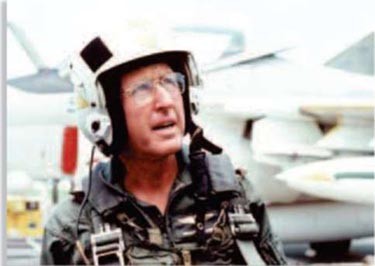 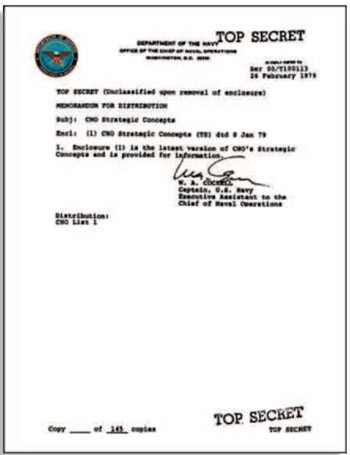 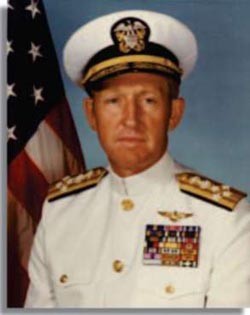 Why it was written (I)
To show USN relevance to conflict with Soviets, primarily through forward, global, offensive US naval operations
Dampen Zumwalt/Turner/Carter emphasis on SLOC protection
Influence & change perceptions about utility of USN
By U.S. political leadership
By Soviets
Explain why US needed "maritime superiority" - even "supremacy" - especially in war with the Soviets
Elevate debates on USN budget to strategic level, especially to provide rationale for high-quality platforms & systems over less capable ones, and to deploy 12 carrier battle groups

Key ideas (I):
Focus on global conventional war with Soviet Union, Warsaw Pact
NATO had global concerns
War in Europe the least likely scenario
USN NORLANT convoy escort only one of many important USN roles
Why & how a war starts will influence USN response capabilities
Uncertainties re: Soviet use of tactical nuclear weapons at sea
Strategic nuclear forces & other contingencies not considered

Key ideas (II):
Global Conventional War vs. Soviet Union, Warsaw Pact (continued)
NATO-Pact War will be global
USN must be offensively capable to destroy Soviet forces US is and will be outnumbered
USN margin of superiority = carriers & at-sea sustainability
USN must not mirror-image Soviets
USN must retain technological superiority
USN must draw on sister services & allies

Key ideas (III):
Global Conventional War vs. Soviet Union, Warsaw Pact (continued)
US must capitalize on Soviet geographical disadvantages & defensive mentality
USN must fight with what it has on hand
USN must use tactics that ensure favorable attrition ratios NATO northern flank has direct impact on NATO center

The "Swing Strategy" is an anachronism
US must prioritize key areas & choose order for sequential control, given limited USN force levels 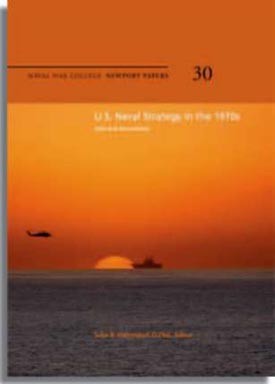