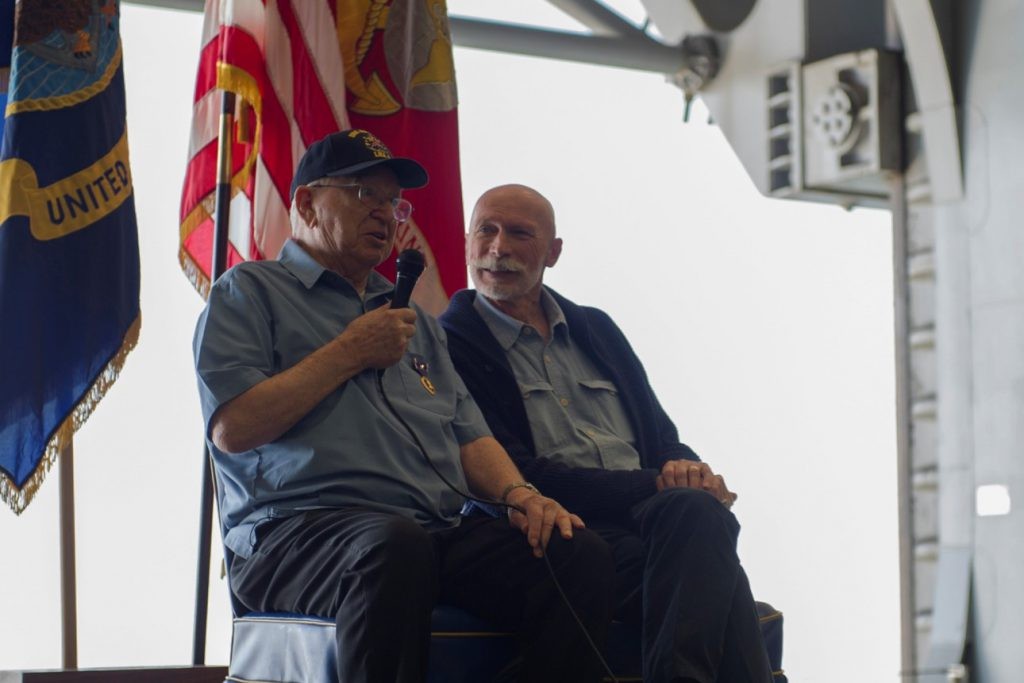 SAN DIEGO (Oct. 23, 2014) Lauren F. Bruner, USS Arizona survivor, talks to Sailors and Marines assigned to amphibious assault ship USS America (LHA-6) about his experiences during the attack on Pearl Harbor. Bruner joined the U.S. Navy in 1938 just after his 18th birthday and is one of 10 remaining survivors from USS Arizona, which was sunk during the World War II attack on Pearl Harbor in 1941. America is the first ship of its class and the fourth to bear the name. (U.S. Navy photo by Mass Communication Specialist 1st Class Lewis Hunsaker) 141023-N-LQ799-050

(Originally published on the NHHC Sextant blog on September 13, 2019.)

Recently I received in the mail a piece of the battleship USS Arizona (BB-39) sent to me by Lauren Bruner—one of the last four living survivors of the ship—as a gesture of thanks for what Naval History and Heritage Command does to keep alive the memory of our Navy veterans.

I admit to being incredibly choked up when I opened it, knowing what that relic meant to him, and what it means to me.

Sadly, I learned that Fire Control Chief Petty Officer Lauren Fay Bruner passed away on September 10, 2019, a couple months shy of his 99th birthday. Sending that relic was one of his last acts.

Fire Controlman Second Class (FC 2/C) Lauren Bruner’s battle station on the morning of December 7, 1941, was in the port-side 5” antiaircraft gun director located on the sky control deck high in the forward superstructure, just above the flag bridge, 70 feet above the waterline. 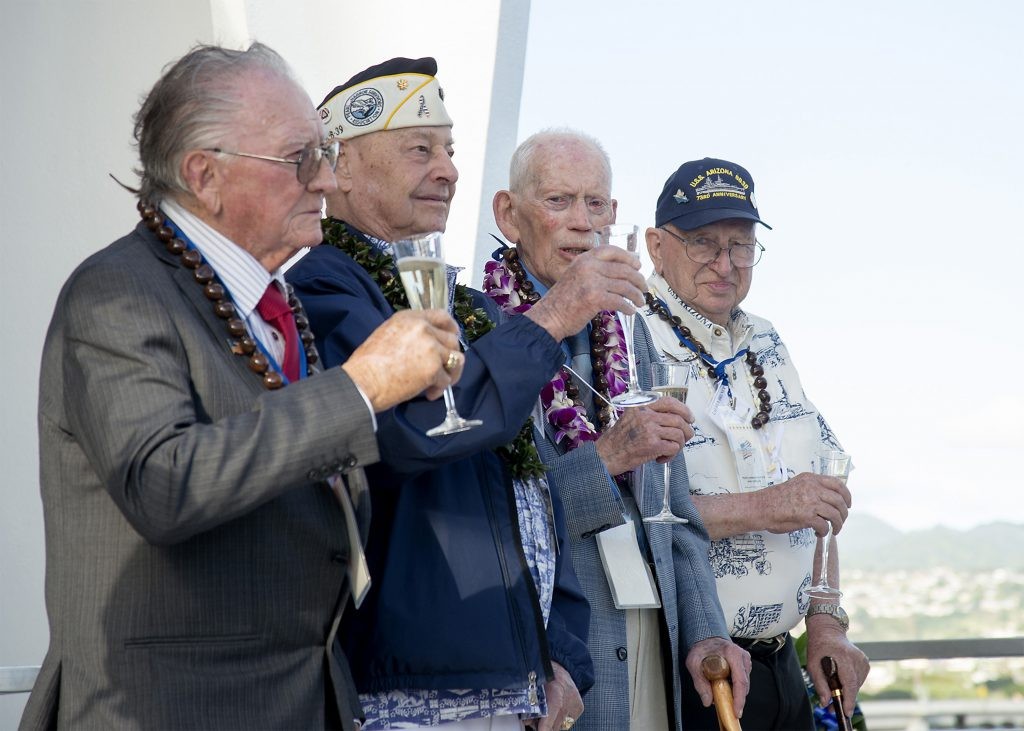 PEARL HARBOR (Dec. 7, 2014) Four of the nine remaining USS Arizona survivors, Donald Stratton, left, Louis Conter, John Anderson, and Lauren Bruner, toast in honor of fallen shipmates and service members of the Dec. 7, 1941 Japanese attack on Pearl Harbor aboard the USS Arizona Memorial at Joint Base Pearl Harbor-Hickam. The four Pearl Harbor survivors announced this year’s USS Arizona Reunion Association ceremony to be the final of its kind. The final toast symbolizes the brotherhood and sacrifice of the day of the attack on Pearl Harbor 73 years ago. More than 2,500 guests, including Pearl Harbor survivors and other veterans, attended the National Park Service and U.S. Navy-hosted joint memorial ceremony at the World War II Valor in the Pacific National Monument. (U.S. Navy Photo by Mass Communication Specialist 2nd Class Johans Chavarro) 141207-N-IU636-610

He was one of only a handful of men on that deck who survived the catastrophic explosion the Arizona’s forward magazine, and who were the only ones in the forward part of the ship to survive: 1,177 of Arizona’s crew perished. Only 93 of those who were aboard the ship at the time lived; an additional 242 Arizona crewmen were ashore.

Bruner was wounded by Japanese machine gun fire and burned over almost 80% of his body. The rest of those who survived the blast were trapped by the raging inferno. Some jumped to their deaths in a futile attempt to escape the flames.

Those who survived only did so because then-Boatswain’s Mate Second Class (BM 2/C) Joseph George, on board the repair ship Vestal (AR-4) moored alongside Arizona, threw a line high into Arizona’s superstructure and tied it down. George was at great risk to his own safety from strafing, bombs that hit Vestal, secondary explosions, and fires. Six badly wounded men made it down that line, over flaming fuel oil and despite Japanese strafing. Two of the men subsequently succumbed to their burn wounds, and four survived. 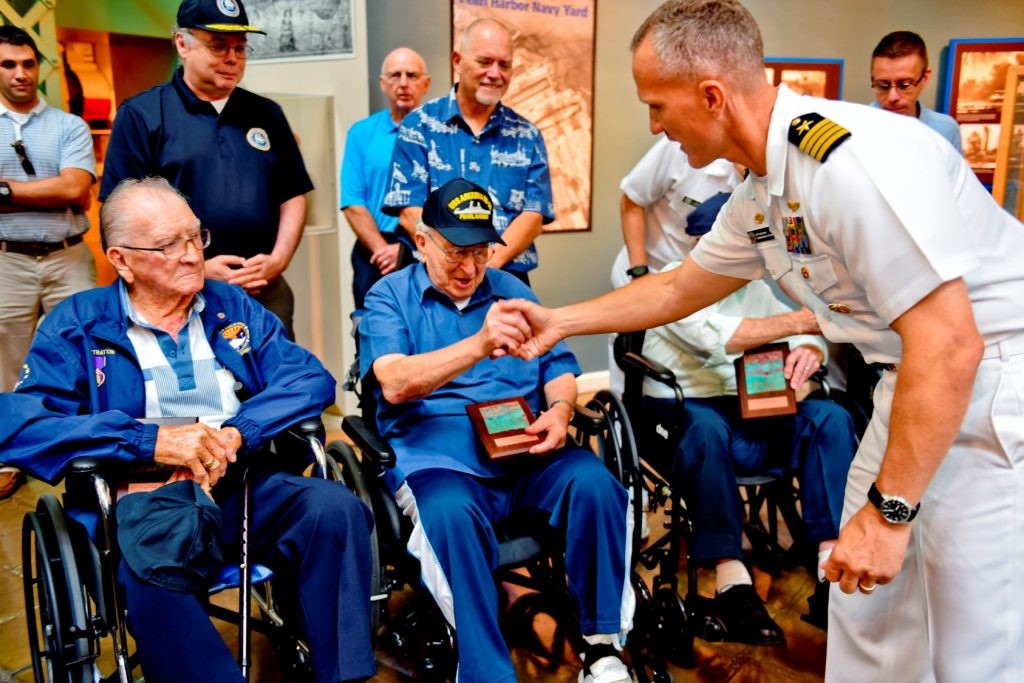 The survivors included then-Seaman First Class Donald Stratton, who is still alive today, and Lauren Bruner, who was the second to last to go down that line. The last was Boatswains Mate Second Class Alvin Dvorak, who the survivors credited with organizing and leading their escape effort and getting Joseph George’s attention. Dvorak tied the knot on the Arizona end that held. He did not survive his burns.

After months of agonizing recovery and morphine-induced nightmares—which he barely survived—and nearly losing his fingers due to infection, Bruner opted to return to sea duty. He served aboard the destroyer Coghlan (DD-606) in eight more battles against the Japanese, including Coghlan’s heroic charge against a superior Japanese force in what was almost the disastrous Battle of the Komandorski Islands in the frigid Bering Sea (see H-gram 016). He finished the war as a fire control chief on Coghlan, steaming into Nagasaki harbor only days after the atomic bomb explosion.

Although Bruner never received an award for valor, he was a hero in my book, with an indomitable will to not only survive, but to return to the fight and see it through to the end.

He never considered himself a hero; like so many of his generation in that war he believed he was just doing his duty and for many years he never talked about it to anyone—haunted by the horrors of what he had seen at Pearl Harbor.

Nevertheless, Bruner and Stratton fought persistently for many years to have a medal awarded to the man who saved their lives life at Pearl Harbor, BM 2/C Joseph George.

It’s a long story of classic bureaucracy, but their effort finally came to fruition on December 7, 2017, when the family of Joseph George was presented with a posthumous Bronze Star with Combat “V” device for valor. I believe in the chaos of the disaster of Pearl Harbor, there were many hundreds of cases of extreme valor by Sailors that went unrecognized.

This was a unique case where there were still two living witnesses, and a written statement found in the archives—thanks to LTJG Matt Previts—from Vestal’s commanding officer Cassin Young. Young was awarded a Medal of Honor for his actions at Pearl Harbor and killed in action at Guadalcanal in command of USS San Francisco (CA-38), which made the award justifiable and representative of so many others who never received one.

In recent years, Stratton and Bruner finally were able to put their experiences onto paper. Both books are extraordinary. Stratton’s All the Gallant Men superbly describes the valor of so many who fought back on that terrible day.

Bruner’s Second to the Last to Leave the USS Arizona is probably the most brutally honest description of the ghastly effects of naval combat, and in my view should be required reading to prepare leaders and Sailors for battle, especially the parts that describe Sailors needlessly dying because of their inexperience.

Like quite a few of the survivors of Arizona (over 40), Bruner has opted to return to his ship and shipmates and will be interred aboard Arizona at a date to be determined. He may be the last who has chosen to do so.

I recently learned that Lonnie Cook, who was inside one of the aft turrets and survived when the magazine exploded, passed away on August 5, 2019.

You can also read my blog post from when I first met Lauren at the 75th anniversary commemoration of Pearl Harbor in 2016.

Fair winds and following seas, Sailors. We have the watch.