“I was angry…anger of being vulnerable…then angry because you didn’t have what you needed to do your job, to help somebody, to do more.”

At the time of the attack, CDR Van Deusen was serving as the Budget Liaison for Congress on the Navy Appropriations Committee. On the morning of the attack, he was at work at the Pentagon.

CDR Van Deusen was awarded the Navy & Marine Corps Commendation Medal in recognition of his actions on the day of the attack.  This medal is awarded to service members who, while serving in any capacity with the Navy or the Marine Corps, distinguish themselves by heroism, meritorious achievement, or meritorious service above that normally expected and sufficient to distinguish the individual above those performing similar services but not of sufficient nature to warrant a higher decoration. 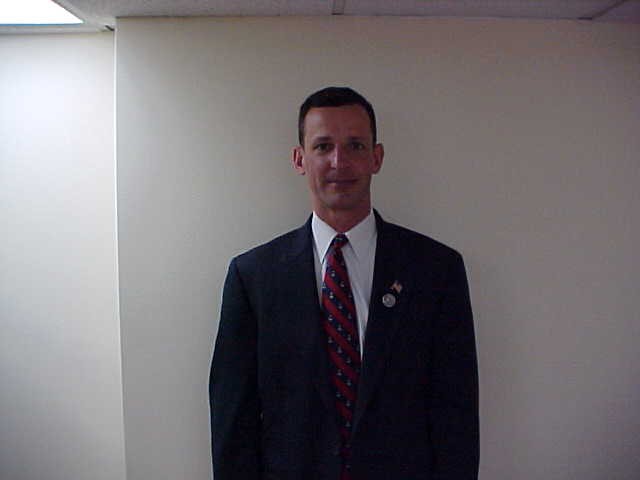 In the months before the attack, CDR Van Deusen’s office had moved from a space on the north side of the Pentagon to a space on the fourth deck of the D ring on the west side of the Pentagon. The new office space was situated directly above what would be the path of impact. On the morning of the attack, he and the others in his office were tuned into the events unfolding in New York City. Out of the corner of his eye, CDR Van Deusen witnessed a bright flash, then experienced an immense amount of pressure which physically threw everyone in the office. The flash and the pressure that followed were the results of the explosion caused by the plane’s impact beneath them. As he and the his colleagues made their way out of their office space into a main corridor, CDR Van Deusen immediately tried to make it to the E Ring, because he thought his boss was in a meeting there.

Finding his boss was a primary concern for CDR Van Deusen in the minutes following the attack (unbeknownst to CDR Van Deusen, his boss had made it out safely). In his attempts to make it to E Ring, he encountered several others who were running towards the danger in order to assist rescue efforts. He and those he encountered were Surface Warfare Officers (SWOs). From the moment of the attack, the smoke continued to grow heavier and thicker. But he and the other SWOs he encountered continued their efforts to find and lead people to safety, acting as a sort of rapid response team in accordance with their SWO training. At the same time, being a SWO, he grew increasingly angrier at the lack of firefighting equipment that was available to them in the building. Even the sprinkler system failed to go off. They were all very frustrated by the time the firefighting teams made their way into the fourth deck of the E Ring. After being in the building for 20-25 minutes post blast, he left the Pentagon.

Following his exit, CDR Van Deusen set off to find some way to make himself useful, to channel his anger and frustrations into something productive. At one point, he was approached by a member of a triage team because he looked like a casualty in many ways. Not long after he exited the building, the E Ring collapsed. He watched with dread as he still was unaware that his boss had made it out alive. He was also concerned for the firemen he’d seen in the E Ring, although they had been pulled out before the collapse, likely because of the false threat of another plane.

Despite his attempts to assist throughout the day, he and the countless others that offered to volunteer weren’t used at all. After getting home late the night of the attack, he woke up and reported to work as usual the next morning. But the building was closed. Since he commuted by bus, he had no way home, so he walked the mall, which is where he saw a newspaper account of the attacks for the first time. It was only then that he realized where his office was in relation to the main point of impact.

After everything, he didn’t feel like a hero, despite what everyone was telling him. He wasn’t doing any of it to be a hero, he was doing it because he wanted to help people. From his perspective, even though he ran towards danger when he went into the E Ring, they didn’t find anyone that needed help and couldn’t locate his boss. And then his efforts to volunteer first on the stretcher brigade then the morgue detail didn’t lead to any work. It all left him feeling like he “could have done more, should have done more, something.” Despite his personal feelings, CDR Van Deusen was awarded the Navy and Marine Corps Commendation Medal for his efforts following the attack. 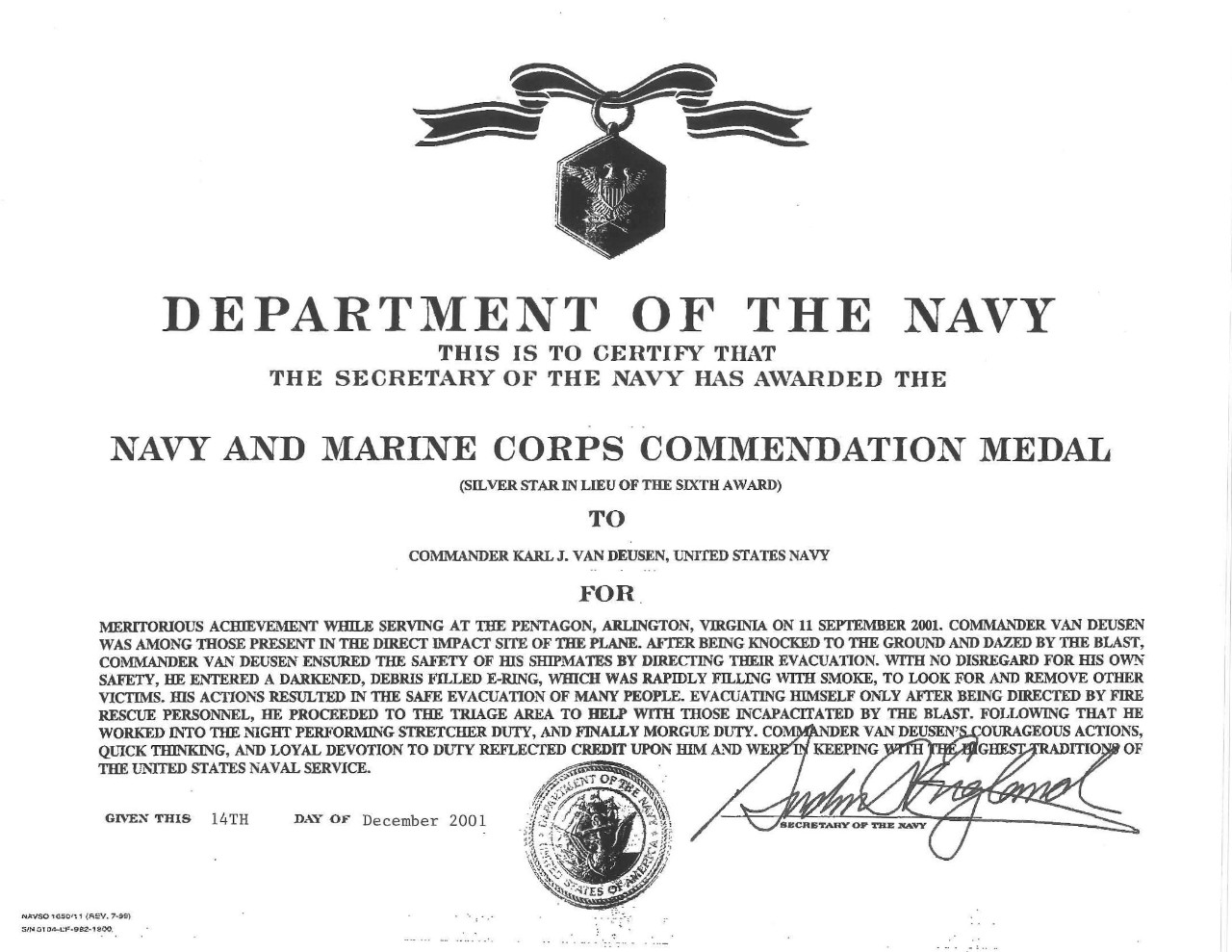