"We went back into it...with the best of intentions and in the worst circumstances."

At the time of the attack, LCDR Way was working in OPNAV N8 Resources, Requirements, & Assessments.  On the morning of the attack, he was at work at the Pentagon.

LCDR Way was awarded the Navy and Marine Corps Commendation Medal for his actions on the day of the attack.  This medal is awarded to service members who, while serving in any capacity with the Navy or the Marine Corps, distinguish themselves by heroism, meritorious achievement, or meritorious service above that normally expected and sufficient to distinguish the individual above those performing similar services but not of sufficient nature to warrant a higher decoration.

LCDR Way was in his office on the fourth deck of the C Ring between Corridors 3 and 4 when the plane hit the Pentagon.  At first, he and the others tried to exit their offices and evacuate down Corridor 4, but they found Corridor 4 was full of smoke, so they exited out of their offices at Corridor 3.  At the escalators at the intersection of Corridors 3 and 4, LCDR Way had someone turn off the escalator that was going up, so it could be used as a contraflow route.  He then looked down Corridors 3 and 4 and thought there should be more people coming out.  He worked his way back down Corridor 3 all the way to the E Ring popping into office spaces along the way.  Then he went back to Corridor 4.  The smoke there was bad, but once he got down to the ground, he saw feet - people who had made it to Corridor 4 but couldn't figure out if there was a way through the smoke.  He started calling out to them and eventually crawled almost all the way to the E Ring to guide them out.

When the smoke got too difficult to navigate in Corridors 3 and 4, LCDR Way made his way down to the inner courtyard.  Along the way he encountered an individual who was severely burned.  LCDR Way helped him down to the inner courtyard.  There the triage area was just being set up, so LCDR Way jumped in to help.  He had taken a basic EMT course, so he then began administering triage to several different individuals.  He stayed in the inner courtyard until the last survivors had been transported away.  After that, he helped set up the temporary morgue which they wanted in place in case they started bringing out remains.  Eventually though, it was decided remains recovery could not begin until the next day.

Beyond recounting his experiences, LCDR Way also discussed all of the ways he felt they could have been better prepared and better equipped.  He expressed frustration with the lack of basic firefighting equipment and triage medicine kits which he felt cost lives.  But he also recognized the number of lives that were saved by those who rushed in to help without thought for their own lives. 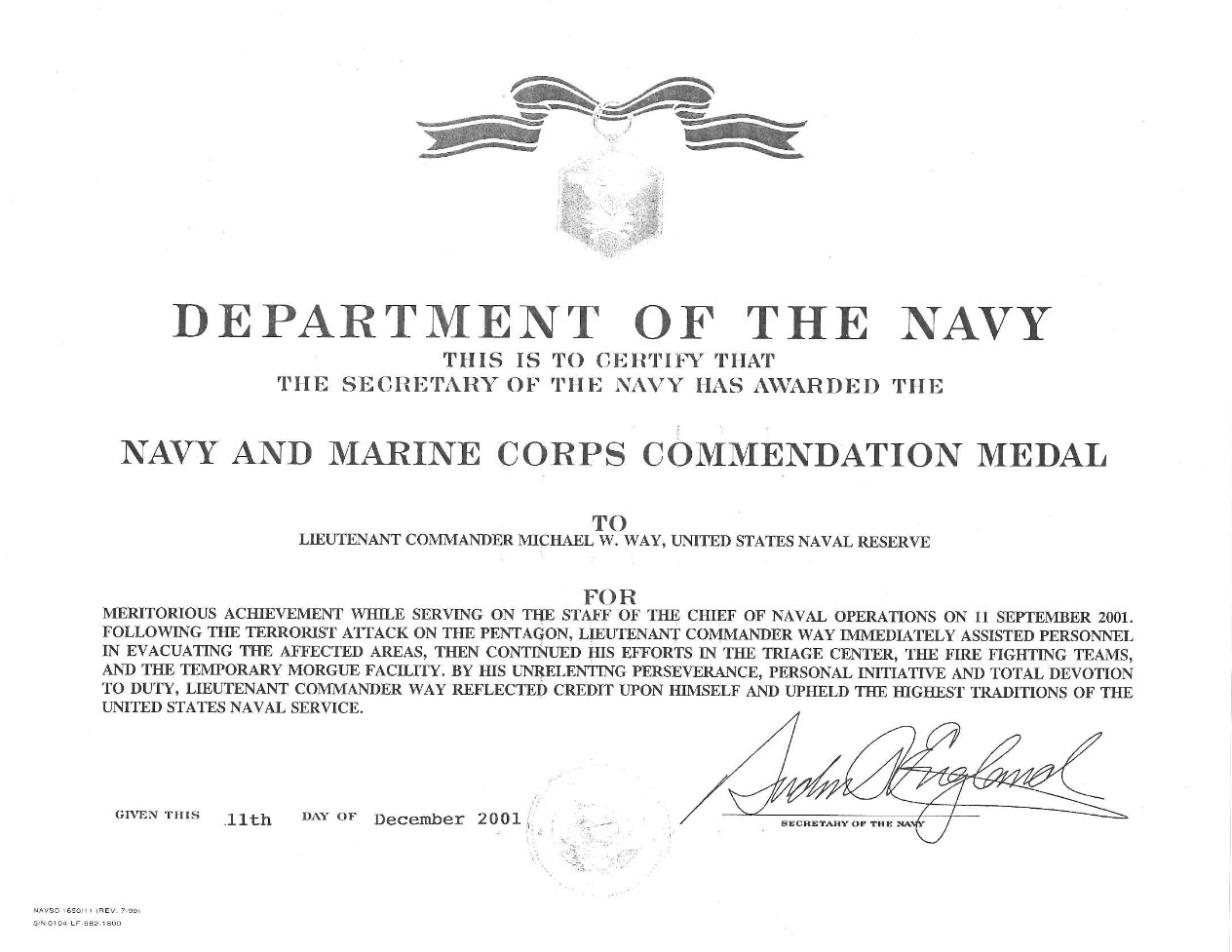