“The thing that kept me going was…a drive to just want to do something, and to help out. It was thinking of people that were either stuck or trapped.”

At the time of the attack, LT Sell was serving in the OPNAV N751 Expeditionary Warfare & Naval Special Warfare Branch. On the morning of the attack, he was at work at the Pentagon.

LT Sell was awarded the Navy & Marine Corps Medal for his actions in the aftermath of the attack.  This medal is awarded to service members who, while serving in any capacity with the Navy or Marine Corps, distinguish themselves by heroism not involving actual conflict with the enemy. For acts of life-saving or attempted life-saving, it is required that the action involve the risk of one’s own life. It is the highest non-combat decoration for heroism awarded by the Department of the Navy. 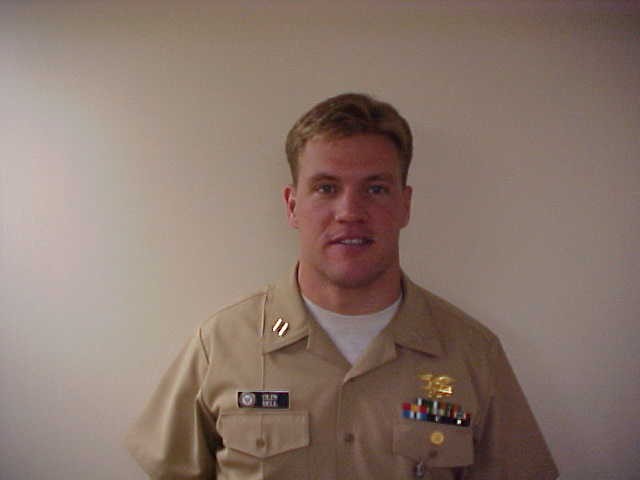 In the moments leading up to the attack, LT Sell had been watching the news coming out of New York City with the others in his office, including CDR Craig Powell. Their office was on the fifth deck of C Ring just off Corridor 4. LT Sell had just started to take a call on his cell phone when the building shook from the force of a major explosion. CDR Powell started pushing everyone out of the office into Corridor 4. They all started heading towards the inner courtyard. At some point in the evacuation, he got separated from CDR Powell. LT Sell spent a few moments trying to find CDR Powell. In those few moments, the thought occurred to him that maybe it wasn’t a good idea for large numbers of people to evacuate into a central location like the inner courtyard, because it made such an easy target. But he wanted to link back up with CDR Powell, so he exited into the inner courtyard to look for him.

In the inner courtyard, he didn’t find CDR Powell, but LT Sell did see and smell for the first time the after effects of the impact and the explosion. For a brief second, he just stopped and stared at the plumes of black smoke rising from the building he’d just exited. Then he started moving again. He made contact with some individuals who worked in OPNAV N75 and told them to tell everyone that he was ok and going to look for CDR Powell. From there, he headed back towards Corridor 4, which is where he saw injured people exiting the building. He began assisting triage efforts. He’d taken a couple of EMT classes, but hadn’t the time to complete the course. He still had some knowledge of field medicine from his SEAL training, so he did the best he could to assist those efforts and provide medical assistance to injured people.

When he noticed individuals with stretchers running into the building, he joined them. At that time, he located CDR Powell, who was with LtCol Giles Kyser, USMC, in the alley between B and C Ring. They were working at the hole that been blasted out of the C Ring wall, trying to fight the fires and work their way into the building as part of search and rescue efforts. The two officers had set up an informal command in the area and were working to ensure no one else got hurt or lost. Prior to his assignment at the Pentagon, LT Sell had reported to LtCol Kyser while he was serving as a SEAL Team platoon commander in Europe, so he thought everything would be okay if he just stayed with CDR Powell and LtCol Kyser.

Serving with CDR Powell and LtCol Kyser, LT Sell did everything he could in the next few hours to assist the search and rescue efforts and help the first responders and law enforcement personnel as they arrived at the site. Eventually though, LT Sell and the others were released as everyone began to realize that there was nothing more they could do.

In his oral history, LT Sell detailed the experiences he had the day of the attack. He also talked about the days and weeks after, how the day to day work in the N751 office changed for him, his new assignment in Bahrain, and his future in the Navy. He shared many anecdotes that give more depth to his story. 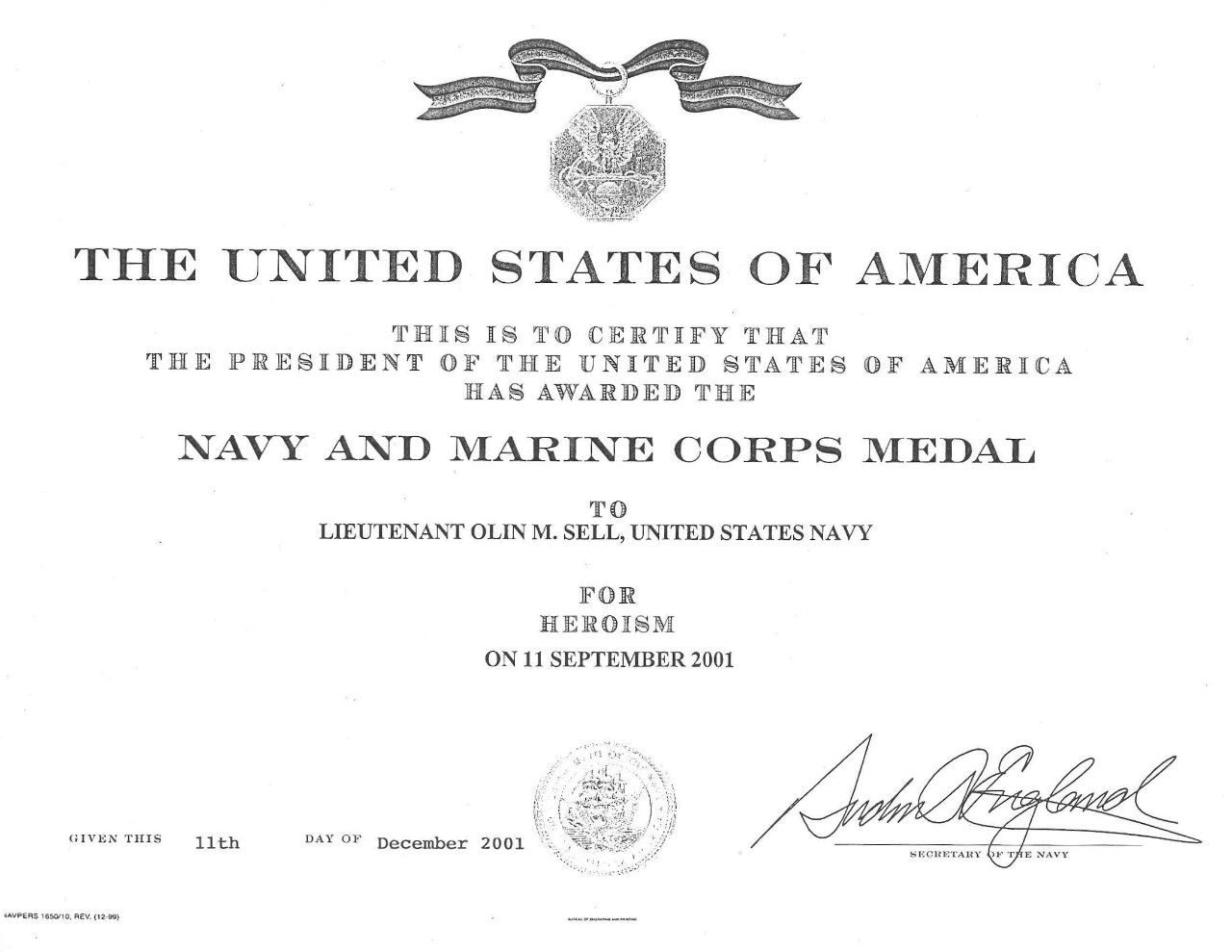 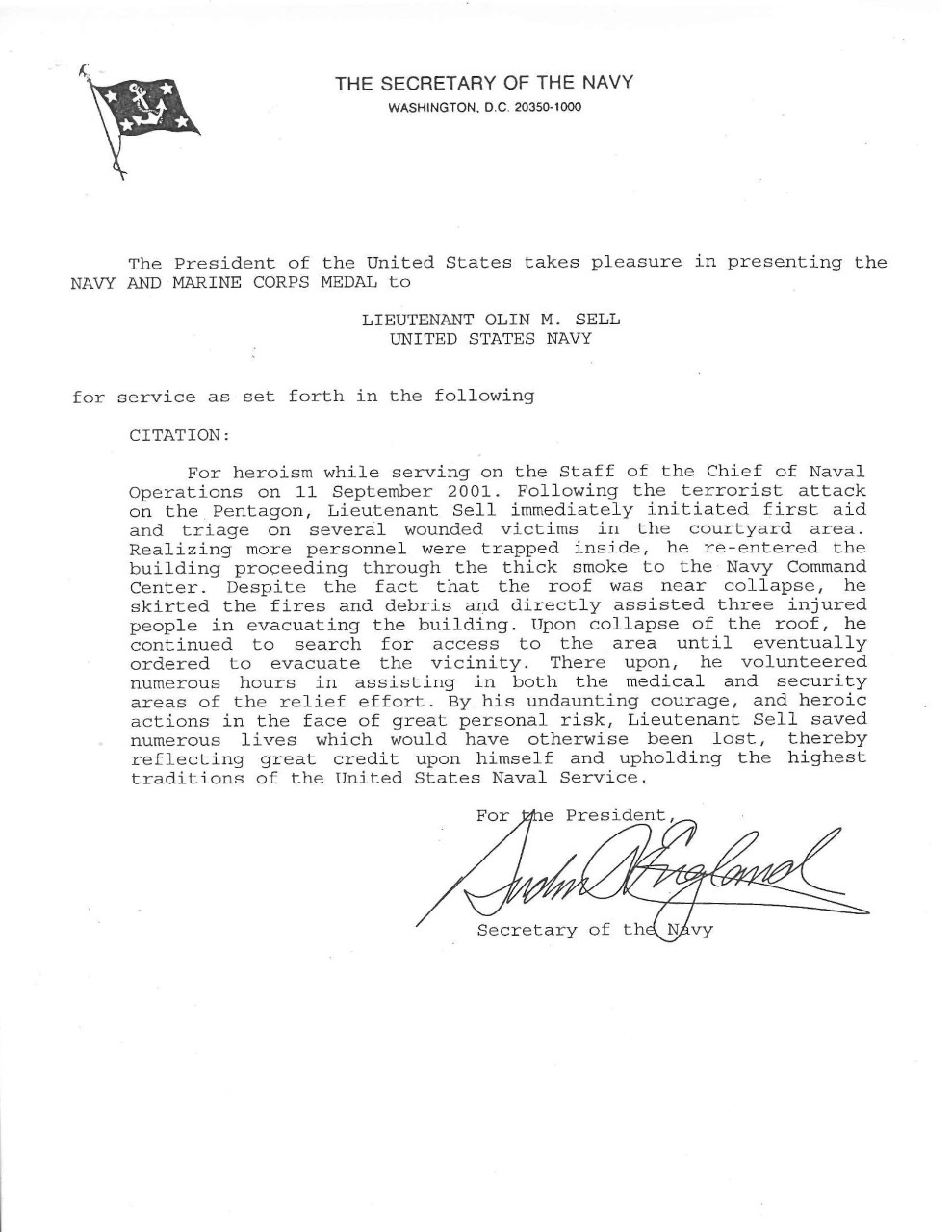