“…in the awards side you know, we have those heroes and rightly so, but you know there’s probably so many heroes of that particular day, personal heroes you know, individuals you know, even if it was just a hug to comfort you, that’s your hero.”

At the time of the attack, Mrs. Wilson was working as the head of the Navy Awards Board.  On the morning of the attack, she was at work at the Washington Navy Yard. 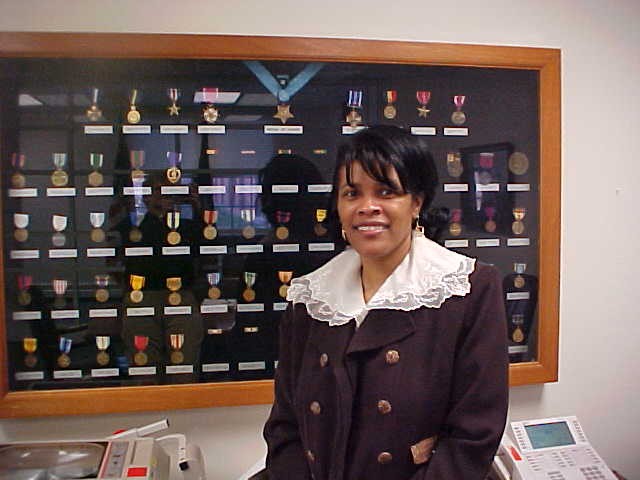 The Navy Awards Board is responsible for processing and adjudicating all of the awards at the CNO (Chief of Naval Operations) and SECNAV (Secretary of Navy) level.  In addition to maintaining the records database for all awards given by the Department of the Navy, the Board also reviews and gives final approval on all award recommendations.

Handling awards in the aftermath of the attack on the Pentagon on 11 September required two separate processes.  Mrs. Wilson's office first had to ensure that all of the Navy personnel who died in the attack received their end of tour awards and Purple Hearts in time for their memorial services and burials.  The office also had to handle the review and approval of the heroes awards, the Purple Hearts for those uniformed personnel who had been injured during the attack, and the question of whether civilians would be eligible for the Purple Heart.

In her oral history, Mrs. Wilson went into great detail about all of the work she and her staff did in the weeks and months after the attack.  She talked about the special processes they set up to help manage everything.  She also talked about the work they did to ensure everyone received the award they should receive, which involved a significant amount of research into past events and historical precedent.  Beyond detailing their work, she also talked about the difficulties they had since the attack was so close to home.  Everyone on her staff knew at least one person that died that day.