“I learned a new word, horrific.”

At the time of the attack, HM1 Powell was serving on the staff of the Enlisted Community Manager for Medical and Dental Rating in the N13 office. On the morning of the attack, he was at work at the Navy Annex. 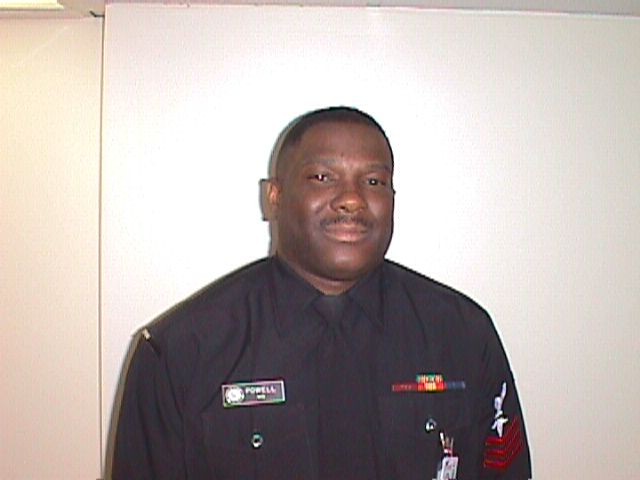 After evacuating from the Navy Annex following the attack on the Pentagon, HM1 Powell gathered triage supplies then went with a few others to set up triage at Henderson Hall, the Marine Corps headquarters a couple of blocks from the Pentagon. That day, the Henderson Hall triage team saw a dozen or so walking wounded, and HM1 Powell assisted with efforts to treat them. After arriving home that evening, he sat in his driveway and cried because of the things he’d witnessed that day.

On 12 September, he reported to work. Early on in the day, he ended up at one of the Navy’s response tents at the crash site. He was assigned the duty of transmitting information related to remains recovery from the crash site up to the Navy Annex, where the N1 had established an emergency command center. While there, he was tasked with helping with remains recovery. He was assigned to a team that went into the building, transferred remains to body bags, and then transported the bags to the refrigerated trucks at the temporary morgue.

In his oral history, HM1 Powell detailed everything he witnessed and experienced while working on remains recovery. He discussed the difficulties he had processing everything, the mental and emotional toil the work had on him, and the help he’d been receiving from the Navy’s SPRINT Team, psychiatrists, and chaplains. He also discussed the value of the work he did and the importance of it.