“We were ready…everybody made use of what was available. Everybody thought it out…Everybody was resourceful. Everybody fell into place.”

At the time of the attack, CDR Powell was serving in the OPNAV N751 Expeditionary Warfare & Naval Special Warfare Branch. On the morning of the attack, he was at work at the Pentagon.

CDR Powell was awarded the Navy and Marine Corps Medal for his actions on the day of the attack. This medal is awarded to service members who, while serving in any capacity with the Navy or Marine Corps, distinguish themselves by heroism not involving actual conflict with the enemy. For acts of life-saving or attempted life-saving, it is required that the action involve the risk of one’s own life. It is the highest non-combat decoration for heroism awarded by the Department of the Navy. 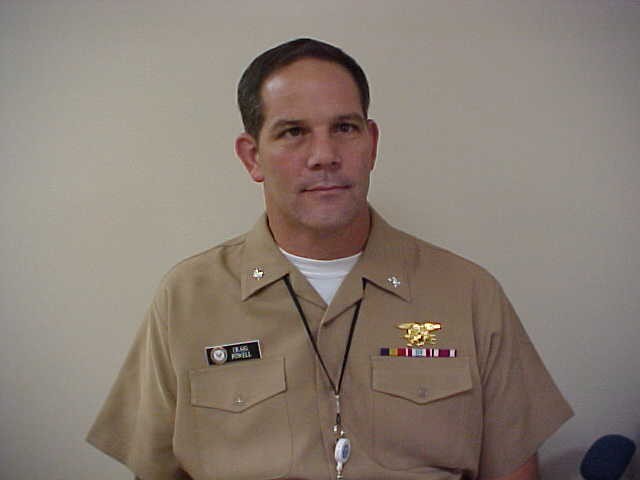 CDR Powell’s office was on the fifth deck of the C Ring directly off Corridor 4. When the plane hit the Pentagon, CDR Powell knew the impact was directly below his feet, because he was familiar with explosives and the patterns created by their shockwaves. He knew he and the others in his office couldn’t stay there. They headed down Corridor 4 towards the inner courtyard. He felt the inner courtyard would be a prime target if there was a second attack, so he kept heading down to the first deck. There he immediately encountered several wounded individuals. After helping a couple, he headed back into the smoke in Corridor 4 to try and help others who hadn’t been able to make it out on their own.

When CDR Powell went back into Corridor 4, he found LTJG McKeown.  She'd just escaped from the wreckage of the Navy Command Center.  Before escaping, she'd try to locate the two petty officers under her command but was unable to find either of them.  When she found CDR Powell, she relayed to him the names of the petty officers and their locations in the Navy Command Center.  He assisted her for a moment before another officer came along and helped her to triage.  From there, CDR Powell started to head deeper into the building to find the two petty officers.  But he soon realized that without breathing equipment, he too would quickly become another casualty, so he turned around.  He went to the alley between C and B Rings, where several others had gathered to try and enter C Ring through one of the holes in the C Ring wall. The destroyed area he and the others were trying to enter was the Navy Command Center.

Eventually he made it inside after encountering YN1 Williams and YN2 Lewis, both of whom had made it out of the office they shared with Jerry Henson and Jack Punches. The petty officers told CDR Powell that someone was still trapped in their office. He, along with LCDR Tarantino and CAPT Thomas, got to the office where Mr. Henson was trapped. CDR Powell contributed to the rescue effort.

After doing his best to rescue everyone he could, CDR Powell forced everyone out of the burning command center because he felt the ceiling was going to collapse at any moment. Back out in the alley between C and B Rings, he met up with LT Olin Sell and Marine LtCol Giles Kyser. CDR Powell let LtCol Kyser take charge from there. They spent the rest of the afternoon attempting to be of service however they could, but there was little to be done. Eventually CDR Powell made it home.

In his oral history, CDR Powell detailed everything he did on the day of the attack. He also provided several insights into how well people operated on the day, whether they could have been better prepared with training and equipment, and how he felt leadership was handling the reaction. He also discussed his career and where he’d like to go in the future. 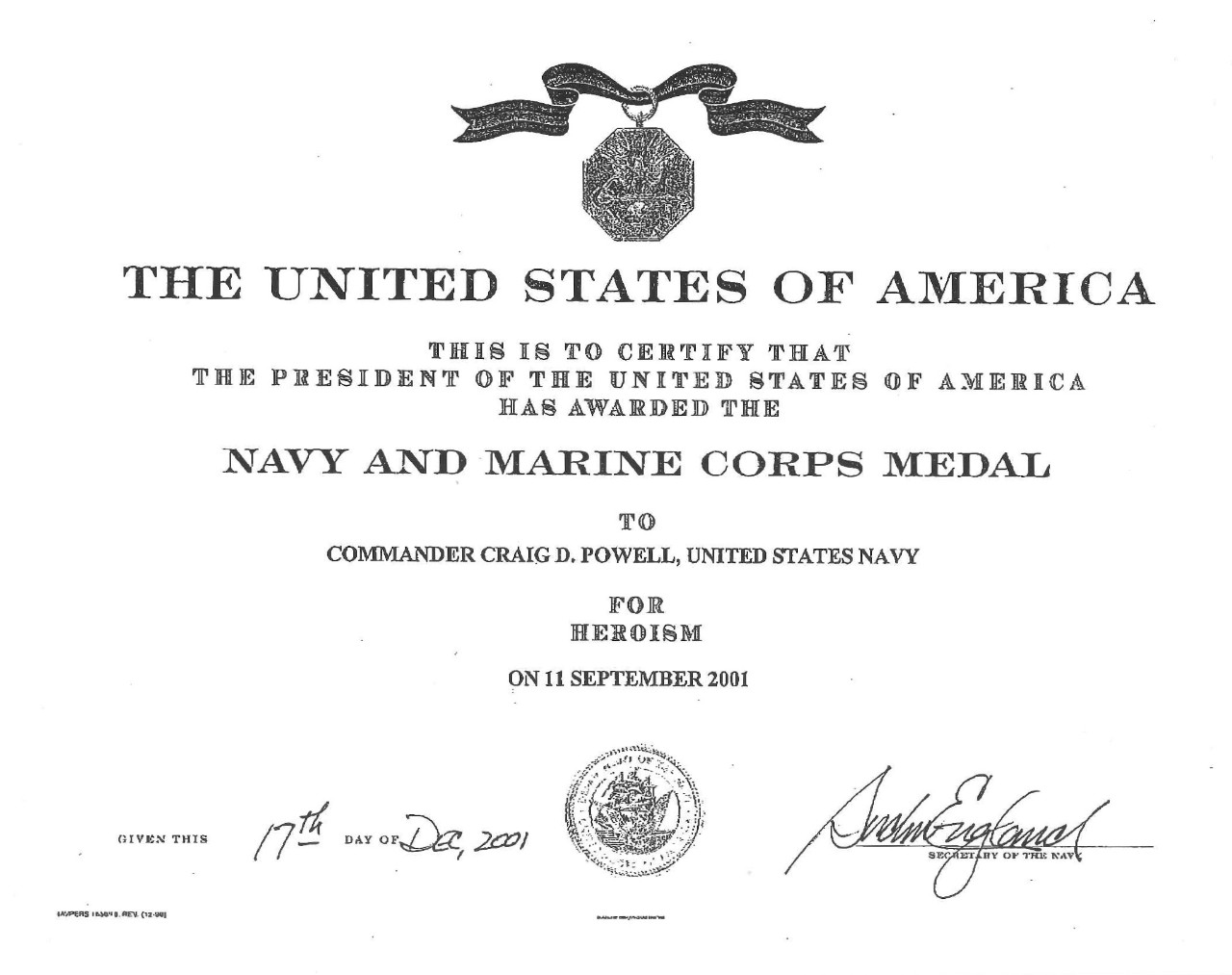 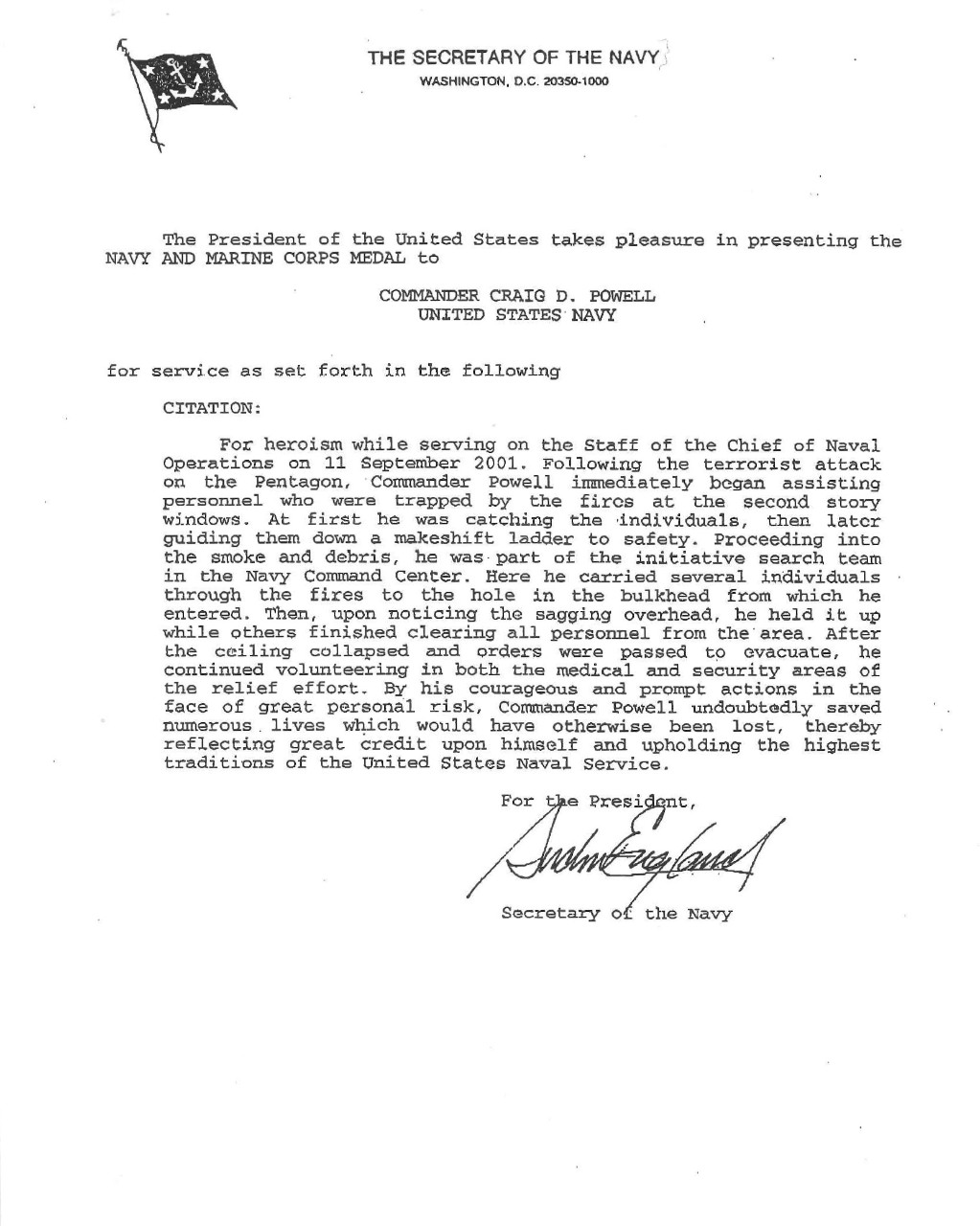