“It was just an instinctive thing for me. I don’t even know why, but it was like being back on the ship. You go to where your shipmates are having a problem.”

CAPT Thomas was awarded the Navy and Marine Corps Medal in recognition of his efforts on the day of the attack.  This medal is awarded to service members who, while serving in any capacity with the Navy or Marine Corps, distinguish themselves by heroism not involving actual conflict with the enemy. For acts of life-saving or attempted life-saving, it is required that the action involve the risk of one’s own life. It is the highest non-combat decoration for heroism awarded by the Department of the Navy. 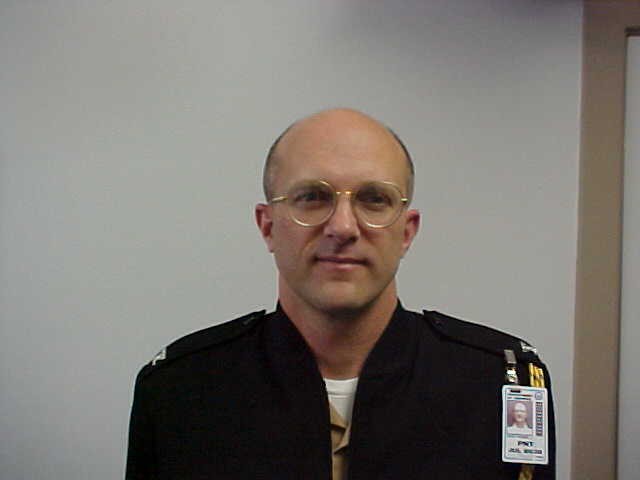 CAPT Thomas’s story is deeply personal. It also illustrates the inherent strength and depths of character that are revealed when the human body and spirit are pushed to the extremes.

In the minutes before the attack, CAPT Thomas was in his office on the fourth deck of C Ring near Corridor 6. He was supposed to meet one of his oldest friends CAPT Bob Dolan for coffee at 0930. CAPT Thomas and CAPT Dolan had been roommates at the United States Naval Academy. CAPT Dolan was best man at CAPT Thomas’s wedding. They had remained the closest of friends. However, when CAPT Thomas saw the news of the second plane hitting the World Trade Center, he called CAPT Dolan at his office in the Navy Command Center and they decided to reschedule their coffee. As CAPT Thomas returned to his work, he felt the building shutter and heard a loud boom. He made his way to the alleyway between B Ring and C Ring. He identified the point from where it seemed the blast had originated, towards Corridors 5 and 4, and headed that way.

The scene he encountered when he approached Corridor 5 was like “Dante’s Inferno.” The sun, he recalled, “was blacked out from the smoke,” and debris was strewn everywhere in the alleyway between C Ring and B Ring. He was one of several individuals in khaki uniforms that rushed towards the scene. As he got closer, it dawned on him the devastated area around Corridor 5 was also the location of the office of his friend, CAPT Dolan. He began working his way to the area where CAPT Dolan’s office was located. He stopped at one point to try and open a door after he thought he heard yelling coming from behind it. He and others tried but were unable to break through the large metal door. People that had been further within the space though heard the noise and followed it out to safety. CAPT Thomas moved on, working his way closer to his friend’s office.

When he reached the space he thought would have been CAPT Dolan’s office, CAPT Thomas got low to the floor to look beneath the smoke. About twenty yards away, he saw a face. Because of the angle, it took him a moment to realize he was seeing a man buried under a pile of office furniture. The man, Mr. Jerry Henson, was alive, but was fading in and out from smoke inhalation. CAPT Thomas yelled for help. CAPT David Tarantino answered. The two of them managed to free Mr. Henson. CAPT Thomas helped Mr. Henson make it out of the building and into the alleyway.

At that point, CAPT Thomas knew from what he’d seen in the wreckage that his friend would not have been able to survive. But he stuck around for the center courtyard area for the rest of the day, doing anything he could to help out relief and rescue efforts. He helped set up triage and a temporary morgue. He also helped the FBI begin to search and recover evidence.

When he finally made it home around 2am on the morning of 12 September, he had several messages from CAPT Dolan’s wife. She hadn’t received any word from her husband.  After that, he worked hard to ensure that CAPT Dolan was properly honored and his family received the support they needed. A few days before he gave his oral history, CAPT Thomas attended the burial at sea for CAPT Dolan. Before USS MCINERNEY (FFG-8) sailed out of Mayport, the Navy arranged for a Catholic service onboard the ship while it was in port, which the family was able to attend. They also arranged for the remains to be buried at sea in a casket.

Beyond discussing the lengths he went to rescue everyone he could in the Pentagon and the personal stories related to the loss of CAPT Dolan, CAPT Thomas also praised the efforts of everyone he encountered and worked alongside of the day of the attack. He also praised the Navy for their efforts to make sure CAPT Dolan’s funeral was as perfect as it could be. CAPT Thomas also talked about some of the wounds he received when he entered the burning building as well as the work he’d been doing since the attack. 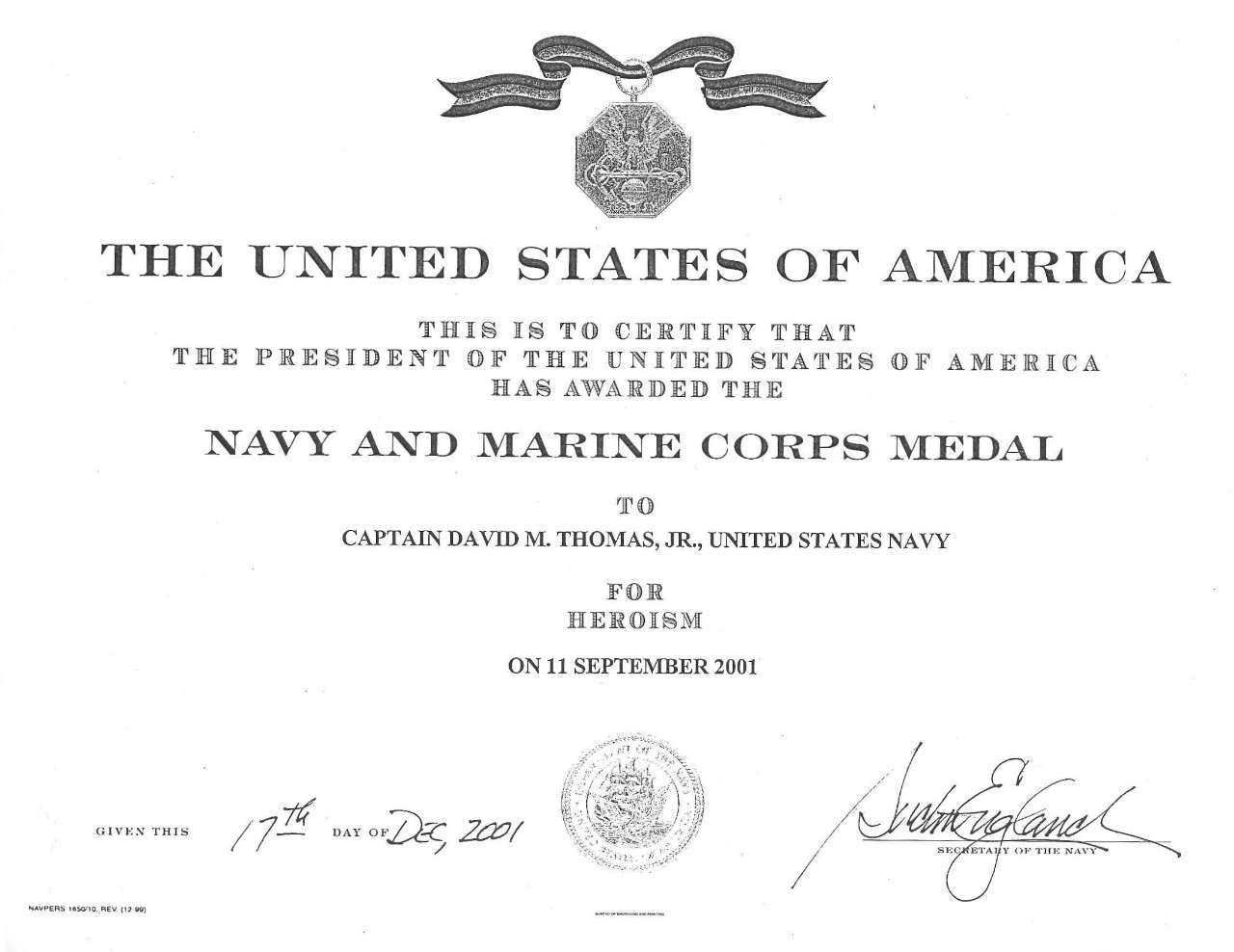 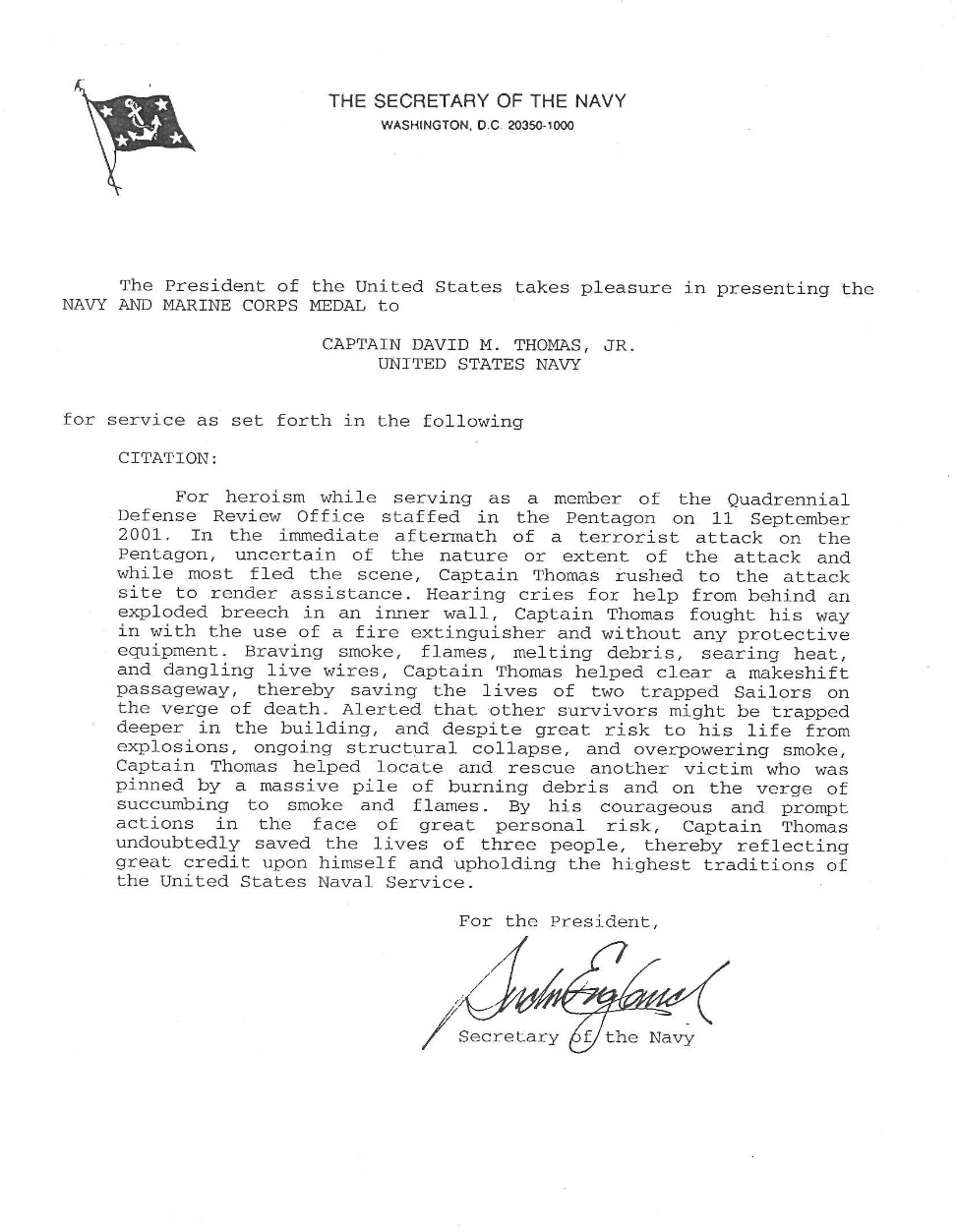 Link: Smithsonian National Museum of American History Artifact - Uniform worn by CAPT Thomas on the day of the attack