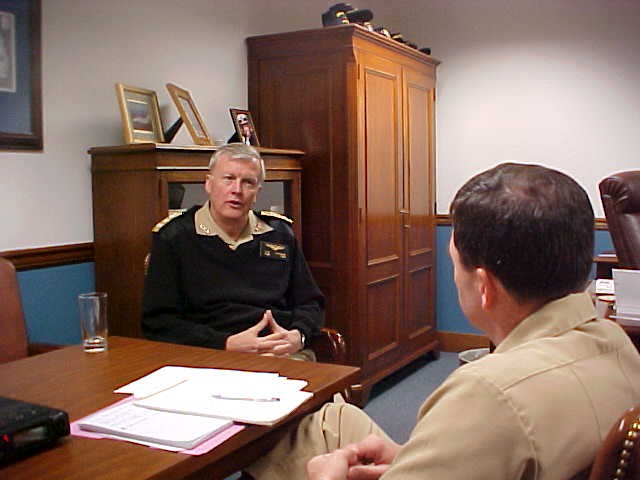 VADM Totushek was in his office near the intersection of Corridor 4 and the E Ring on the west side of the Pentagon at the moment the plane crashed into the Pentagon. He and his staff felt and heard the physical effects of the crash and the ensuing explosion, but they were effectively unharmed. As he exited his office to evacuate, he looked and noticed the total devastation that had taken place less than 100 feet away. He encountered some people who were beginning to panic, so he did the best he could do calm them down and lead them out of the building. After making it out of the Pentagon, he and his front office staff were able to leave the Pentagon via car and drive to VADM Totushek’s residence on the Washington Navy Yard. There he was able to establish communications with Navy leadership, including the CNO, who had also returned to his residence on the Navy Yard.

In the hours that followed his return to this residence, VADM Totushek began working on reserve mobilization efforts. He knew that reserve forces would play a large role in the inevitable push to increase force protection around the world following the attacks. By the end of the year, the Navy had received authorization to mobilize more than 10,000 reservists to serve in force protection billets, as well as intelligence and marine inshore and small boat units. In addition to overseeing the mobilization of the reservists, VADM Totushek’s office also handled their transition to long term active duty from civilian life. His office has worked to ensure that the reservists who have been mobilized are given the same benefits as any active duty sailor. His office has also had to deal with a drop in reserve sign-ups because of the mobilization efforts.

In his oral history, VADM Totushek provided insights into how he sees the reserve force within the fighting force of the Navy. He also talked about the current Navy leadership and the work they’re doing to plan for war. VADM Totushek also talked about how important he felt it was to talk directly with mobilized reservists to determine how their new orders have impacted them.