“The burial site actually looks over the south face of the Pentagon. And walking around the bend of the trees and seeing the Pentagon, the area that’s been destroyed and the gravesite altogether at once is another one of those images…it was fitting, it was rather astonishing and unexpected.”

At the time of the attack, LCDR Rielage was serving as the OPNAV N2A1 Deputy Executive Assistant to the Director of Naval Intelligence (DNI). On the morning of the attack, he was at work at the Pentagon.

LCDR Rielage was awarded the Navy and Marine Corps Commendation Medal for his actions on the day of the attack.  This medal is awarded to service members who, while serving in any capacity with the Navy or the Marine Corps, distinguish themselves by heroism, meritorious achievement, or meritorious service above that normally expected and sufficient to distinguish the individual above those performing similar services but not of sufficient nature to warrant a higher decoration.

LCDR Rielage was in the new DNI office spaces on the fourth deck of the E Ring between Corridors 3 and 4 at the moment the plane hit the Pentagon. A few minutes prior to the attack, he’d been down in the CNO Intelligence Plot (CNO IP). Before he’d been assigned to serve in the DNI offices, he’d been an intelligence officer for many years. He’d stuck around the IP space for a few minutes after the end of the daily intelligence briefing to listen on the hot wash, because he couldn’t help his curious nature. In the end though, he convinced himself that intelligence was no longer his job, so he headed back to the DNI offices. A couple of minutes later, the plane hit the Pentagon and killed almost everyone who’d been in the CNO IP at the moment of impact.

LCDR Rielage evacuated with other members of the DNI flag staff to the center courtyard. There he saw the medical personnel working to set up first response and triage, so he stayed to help. LCDR Rielage was a trained firefighter, which meant he’d been through extensive EMT training. He knew that if he didn’t stop to help, he’d regret it. Over the next few hours, he helped set up the triage area and worked with a few individuals who were suffering from smoke inhalation. He then took a stretcher back into the building with couple of other individuals, hoping they’d be able to find survivors. They made it to the alleyway between B and C Rings, which is where he saw the massive holes that had been blown out of the C Ring wall. He knew from his firefighting experience that there was zero chance of any making it through one of the holes, which was full of flames. He positioned himself near the hole that was only filled with smoke. Although he’d heard from a couple of people who’d made it out of the CNO IP that there were still people inside, and he made several attempts to convince others that they needed to go in to pull them out, he was unsuccessful. In those few hours he was in the center courtyard, then the alleyway, then back in the center courtyard, no one came out of the building after the first ten minutes.

After realizing that they weren’t going to see any survivors that needed medical attention in the center courtyard, he and the others made their way out to South Parking. There, he got his first real look at the damage. The only thing that kept him from breaking down at that moment was pulling out his palm pilot and writing down his thoughts.

After LCDR Rielage was released along with the initial response teams around 4:00 pm that afternoon, he eventually found the DNI staff set up in the Marine Corps offices at the Navy Annex. Once there, he worked with them until late in the evening to rebuild the N2 rosters and determine who was unaccounted for – by the end of the evening, they’d narrowed it down to those who’d been in the Navy Command Center and CNO IP. That night, he arrived home after midnight. Before he did anything else, he gathered all of his volunteer firefighting gear and stashed it in his trunk. He then went inside and sat with his wife and cried.

In his oral history, LCDR Rielage talked about the great admiration he had for mainly of the individuals he witnessed in action the day of the attack and afterwards. He talked about the Air Force flag officer he’d seen jump into action in the center courtyard and set up an entire field medical operation. From the moments after the attack and in the days after, he quickly came to appreciate the manner in which DNI Admiral Porterfield and Deputy DNI Miss Long handled and responded to the pressure of the situation. He knew it was especially difficult for them, because of the number of N2 staff that had been lost in the attack. They both made it a priority to provide as much support to the families as necessary while also ensuring the naval intelligence apparatus was operational and met the Navy’s need for current intelligence as they prepared for war. LCDR Rielage also talked about his personal feelings and the emotions he was dealing with because of the attack and the personal losses he suffered. 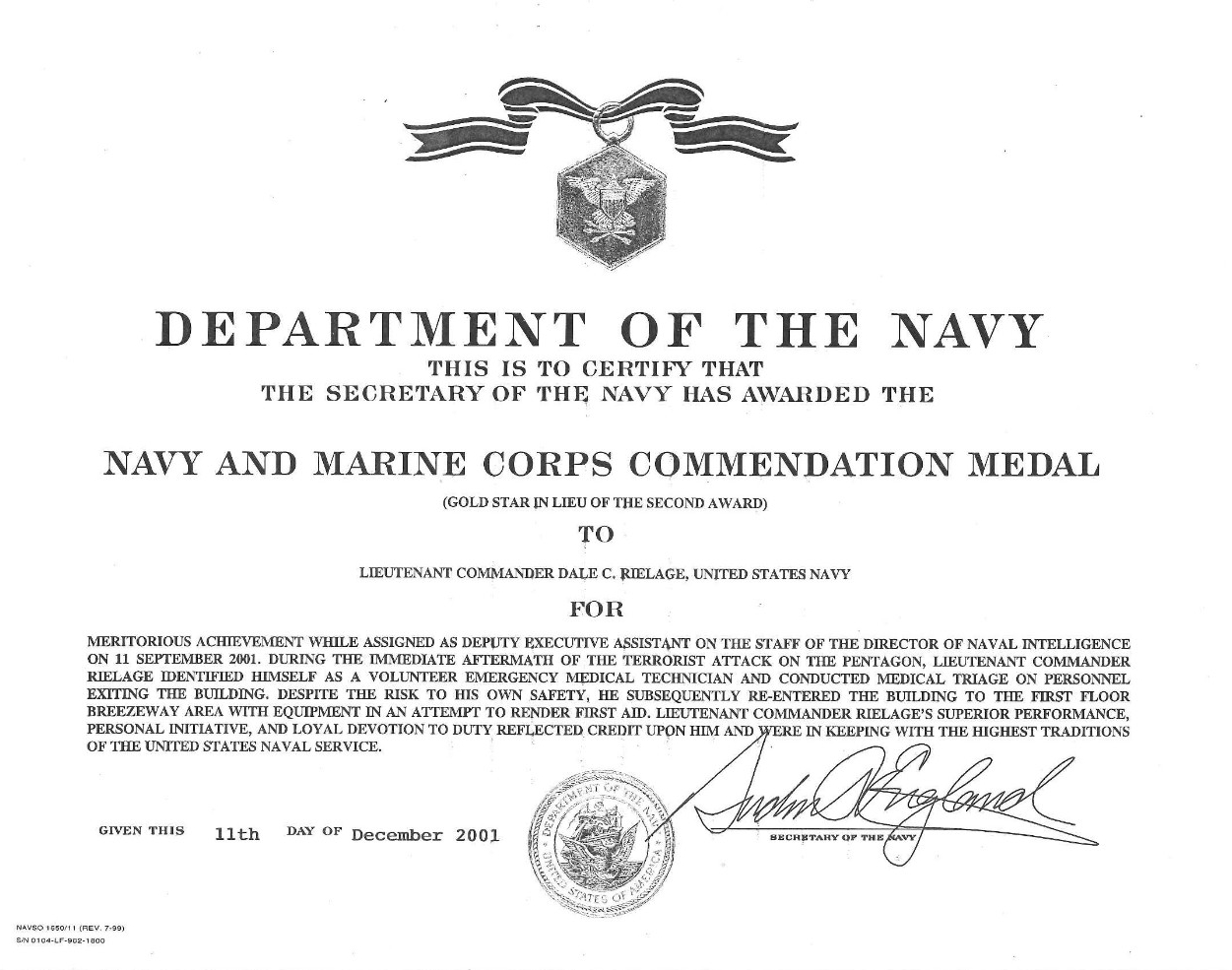