“...a lot of people were in shock...There were a lot of crying going on in there. Just concern. A lot of people couldn’t hardly do their jobs because they were so upset, you know, from what had happened.” 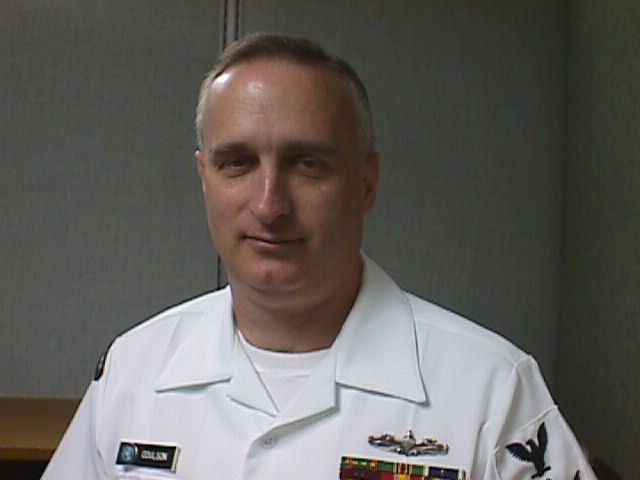 ET1 Coulson's office was responsible for TOPHAND, the secure telecommunications system used by the Secretary of the Navy, Chief of Naval Operations, and the Navy Staff.  The system and the NAVTELCOM staff that worked with ET1 Coulson were located in the Navy Command Center at the Pentagon.  On the morning of the attack, ET1 Coulson started his day at his office at the Pentagon.  Around 7:00am, he left his office and went to the Naval installation at Anacostia for a meeting. After leaving Anacostia around 8:30am, he headed to the Washington Navy Yard and the Navy telecommunications office there.  He was in his car driving from the Anacostia to the Washington Navy Yard when he heard the news of the attacks in New York City.  Since the telecommunications office at the Washington Navy Yard had a TV, he stayed longer than he'd planned to catch up on the news.  He was there when the plane hit the Pentagon.

There were eleven individuals based out of the NAVTELCOM offices in the Navy Command Center at the time of the attack.  Four of those individuals, including ET1 Coulson, were not in the office when the plane hit the Pentagon.  The seven individuals that were in the Navy Command Center when the plane hit died.  In the aftermath, ET1 Coulson had to deal with personal loss and grief. He also felt a responsibility to act like a “dad” to his younger sailors, some of whom were the ages of his own son and daughter.  For one of the individuals who died, ET2 Brian Moss, ET1 Coulson provided support to his family.  He also traveled to Dover and escorted ET2 Moss's remains back for his funeral at Arlington.

In addition to the lives lost, all of the TOPHAND equipment in the Navy Command Center was also destroyed.  While doing what he could to support those around him who were suffering from emotional trauma and support the families of the victims, he was in charge of rebuilding the TOPHAND and other telecommunications systems that had been lost.