At the time of the attack, IS2 Lhuillier was serving as the lead petty officer (LPO) for the Office of Naval Intelligence (ONI) detachment assigned to the Navy Command Center (NCC).  On the morning of the attack, he was work in the CNO Intelligence Plot (CNO IP) office within the NCC.

IS2 Lhuillier was awarded the Navy and Marine Corps Medal for his actions on the day of the attack.  This medal is awarded to service members who, while serving in any capacity with the Navy or Marine Corps, distinguish themselves by heroism not involving actual conflict with the enemy. For acts of life-saving or attempted life-saving, it is required that the action involve the risk of one’s own life. It is the highest non-combat decoration for heroism awarded by the Department of the Navy. 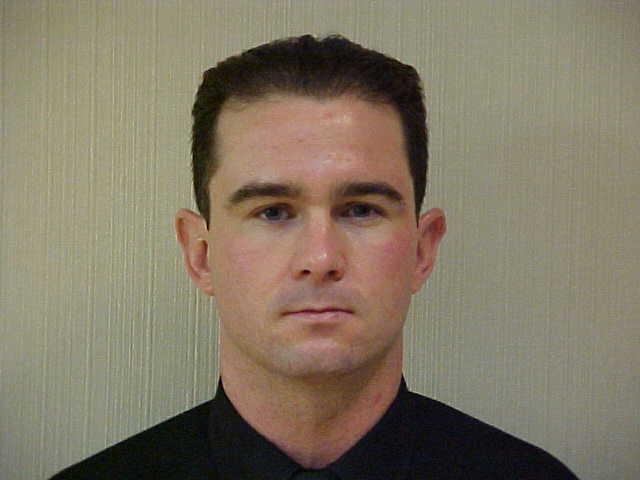 In the minutes before the plane hit the Pentagon, IS2 Lhuillier briefed six CNO IP personnel gathered in the office of CDR Dan Shanower on the possibility of a plane inbound to Washington D.C.  He would be the last person to see all of the six of them alive.  After giving them the information, IS2 Lhuillier returned to his desk in the watch section of the CNO IP and got back to work.  Within moments, he was thrown to the floor by the force of a large explosion.  He tried to get out of the only two doors into and out of his office space, but he was unable to open either wide enough to get out.  The smoke and the fire were impacting his vision, but he could hear LT Humbert calling to him.  She had been working in the watch section too.  At that point, they were both desperate for a way out.  Then he heard another voice telling them that he could see a light, a potential way out.  He'd forgotten that there had been third person in the watch section before the plane hit, LCDR Capets.  LCDR Capets followed the light.  He discovered that the wall between the watch section and the graphics section next door had been knocked down and that a hole had been blown in the exterior wall of the graphics section.  That was their way out.

Once outside in the alley between C and B Rings, IS2 Lhuillier stayed to try and help.  He knew that the six people who had been in CDR Shanower's office were still in there.  He told someone how to get into the office and how many people were in there.  He then worked with others that had gathered to figure out a way to beat back the fires and get back into the Navy Command Center.  He also helped catch individuals who were jumping out of an Army office window on the second deck.

Although he wanted to do more, IS2 Lhuillier was forced along with the others to leave the alley and go to the exterior of the building.  There he was tasked with supporting the morgue detail which had been set up.  They didn't get any bodies out that day though.  After that, he reported to the Navy Annex, then went home.

Beyond detailing his experiences on the day of the attack, IS2 Lhuillier also discussed his return to work and the numerous interviews he had to have with law enforcement.  He also talked about the personal impacts of the attack and going to the funeral of one of the people who had been in CDR Shanower's office. 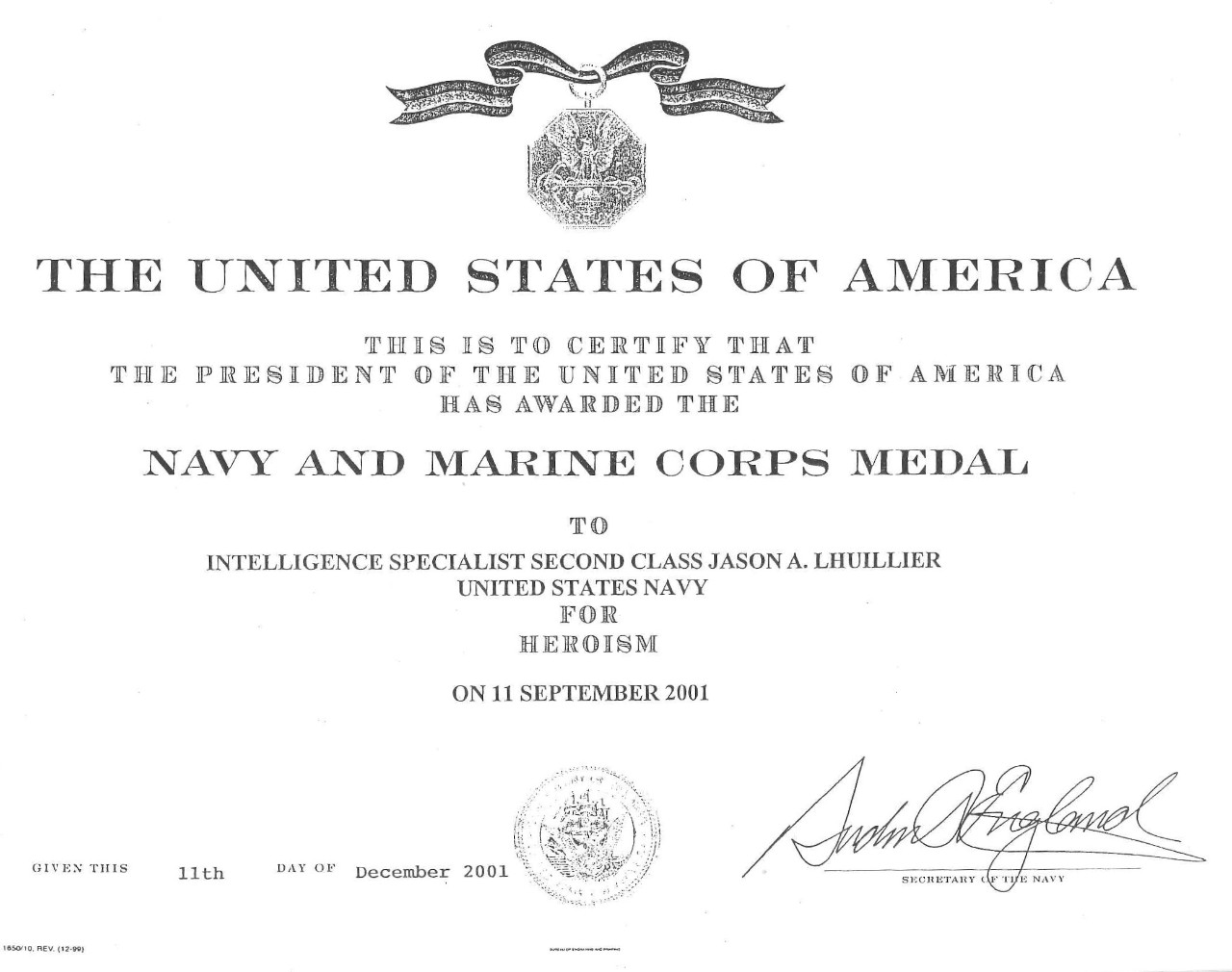 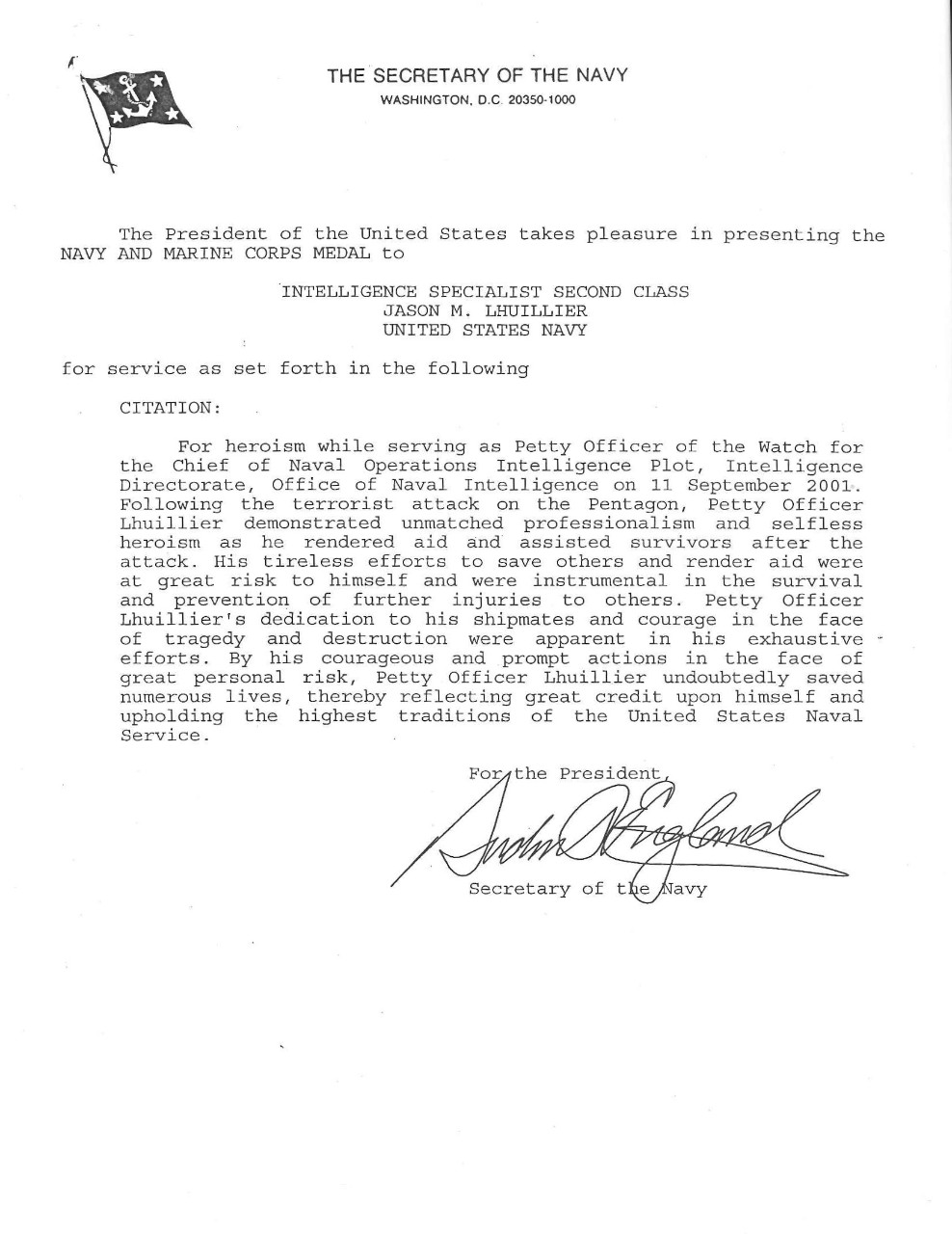