“But we opened the door, and I’m not proud to say, that when we turned the corner and I saw my desk, I lost it. I just couldn’t believe I was sitting there. The ceiling, the framework was down to waist level. There were cinder blocks on my chair...my EA-6B model, which was on top of my bookshelf, was doing a nosedive.”

At the time of the attack, Amy Fowler was working in OPNAV N78 Air Warfare as the Flying Air Program Analyst.  On the morning of the attack, she was at work at the Pentagon.

Ms. Fowler received the Defense of Freedom Medal for injuries she sustained during the attack.  This medal was established to recognize civilians employed within the Department of Defense who are killed or wounded in the line of duty. The medal symbolizes the extraordinary fidelity and essential service of the DoD’s civilian workforce in the preservation of national security. It was established in response to the 9/11 attacks in order to recognize those civilians who would have received a Purple Heart had they been in uniform. 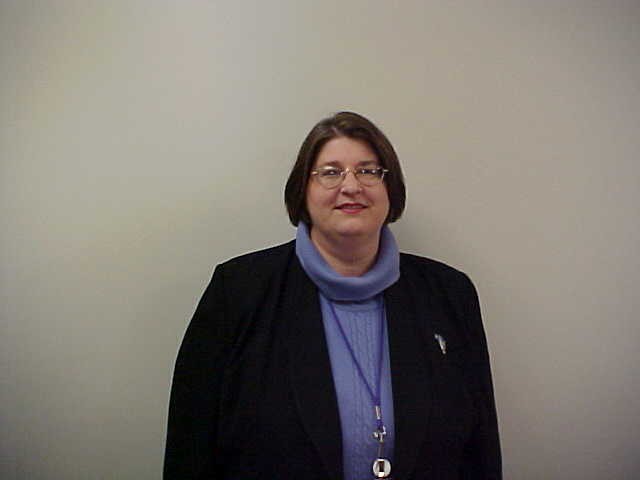 On the morning of the attack, Amy Fowler was in her office on the fifth deck of the D Ring just off Corridor 4.  A colleague mentioned a plane had hit the World Trade Center, but Fowler remained focused on helping a new coworker with his computer. When the plane hit the Pentagon directly beneath them, she felt the building shake, then the ceiling fell down around her. She saw smoke as she began to evacuate the building. On the way out, she began to notice that her head hurt.  Then she ran into a former coworker, who noticed she had a cut that was bleeding down the side of her face.  Her former coworker started calling for a medic. He helped her out of the building to a triage area.  From there, she was taken to Arlington Urgent Care, where she received stiches.  She was safely home by 4:00pm that afternoon.  She returned to her office over the weekend with military escorts to retrieve personal items.  The sight of the destruction in her cubicle space and a few of the others around hers was hard to handle when compared to the relatively untouched spaces in other parts of her office.  She broke down to the point that others who were in the space at the time thought she was going to pass out.

Beyond discussing the experiences she had on the day of the attack and the day she was allowed back into the office to retrieve her personal effects, she discussed how her family handled the news.  She also talked about returning to work and the required counseling sessions she and the others in her office had to attend.