“We were lucky that it didn’t cost us anything. If there had been follow-on action, if there had been another event, we may have had a different outcome because we were in disarray.”

At the time of the attack, VADM Tracey had just begun serving as Director, Navy Staff (DNS) within the Office of Chief of Naval Operations (CNO). She was the highest ranking female officer in the United States Navy at the time. The DNS position is the third ranking Navy officer at the Pentagon behind CNO and Vice CNO (VCNO). CAPT Sweeney was serving as the Executive Assistant to DNS Tracey. On the morning of the attack, they were both at work at the Pentagon. 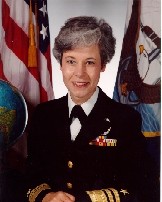 At the moment of impact on the west side of the Pentagon, VADM Tracey was in a meeting with CNO and VCNO in their offices on the fourth deck of the E Ring on the north side of the Pentagon. Immediately, VADM Tracey returned to her spaces to ensure that all of her people made it out of the building. Once she had established some situational awareness, VADM Tracey began making her way with the others out of the Pentagon. Once she had exited into the north parking lot, VCNO found her and asked her to account for all of the three star flag officers that served on the staff of the CNO (N Codes). After roughly half of an hour, being unable to account for any of the three stars in her general area, she made her way to the Navy Annex, where she was hoping they had moved to help set up a command center. Eventually she worked her way over to emergency casualty response center that had been set up by one of the N Codes at a Virginia Department of Transportation (VDOT) location nearby.

CAPT Sweeney was also in their offices at the moment of the attack. Her first instinct was to grab VADM Tracey’s handbag and cover plus her own briefcase. She ran into VADM Tracey on their way out of the building, but lost track of her in the chaos of the evacuation. CAPT Sweeney ended up assisting a few individuals who had been injured then began efforts to muster all of the Navy personnel she could. When she could no longer stay in the area of the north parking lot, she went to go find a phone since her cell phone wasn’t working. CAPT Sweeney ended up walking to a hotel in Rosslyn, roughly 2 miles from the Pentagon. There she was able to make a call and find her colleagues at the Navy Annex.

Both VADM Tracey and CAPT Sweeney discussed their observations and lessons learned. They both believed their offices and the Pentagon as a whole should have been doing more to establish and drill emergency and evacuation procedures. VADM Tracey wanted to do more to establish a muster plan to make it easier to account for staff following evacuations. She also talked about lack of knowledge of any continuity of operations strategy. The main base of operations for the Navy, the Navy Command Center, had been destroyed in the attack. The only reason Navy leadership was able to get back to work so quickly was because it was in their training to do so. VADM Tracey also talked about the impact of the personnel losses on the flag officers and other senior leaders. Despite their own personal struggles, they all continued on business as usual, because that’s the mission.