“I crawled over the downed ceiling tiles and all that and underneath the smoke up into that pitch black passageway to try and see if there was anybody up there that I could help.”

At the time of the attack, CAPT Spence was serving on the OPNAV N801 Program Planning Branch staff. On the morning of the attack, he was at work at the Pentagon.  He had been selected for promotion to the rank of Captain, but still held the rank of Commander.

CAPT Spence was awarded the Meritorious Service Award for his actions on the day of the attack.  This medal is awarded to any member of the United States Armed Forces who has achieved distinction through outstanding non-combat meritorious achievement or service to the United States. The Bronze Star Medal would be awarded in recognition of comparable combat achievement or service. 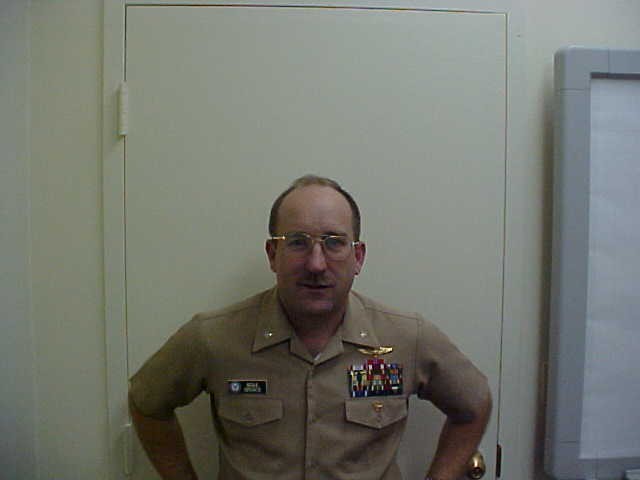 At the moment the plane hit the Pentagon, CDR Spence was in the N801 office spaces on the fourth deck of the D Ring between Corridors 3 and 4. The office spaces were three floors up and roughly fifty to hundred feet to the left (looking out towards E Ring) from the point of impact. In that location, CDR Spence heard a very large boom and experienced the physical shaking of the building. When he looked out to the window towards E Ring, he could see a massive smoke cloud to the right rising from the building. When he and the others in his office space exited into Corridor 4, most turned right and headed towards the inner rings and the center courtyard. CDR Spence though looked left towards E Ring, noticed the amount of smoke filling the passageway in that direction, and immediately headed into the darkness. CDR Spence felt he had a responsibility to help anyone on the fourth deck of the E Ring around Corridor 4 who was injured or generally needed help getting to safety. He was able to enter one Marine Corps Staff office and determine that no one had been unable to escape. At that point, it was becoming difficult for him to breath, and without proper breathing equipment or fire-fighting gear, he knew he wouldn’t last long, so he exited out to the center courtyard once he felt certain that everyone had made it out of those offices.

For the rest of the day, CDR Spence offered help in the center courtyard wherever he could, including attempts to fight back the fire and enter the C Ring where the wall had been blasted open. Eventually though, everyone realized that there wasn’t anyone else that could be rescued, and he made his way home around 1600 that afternoon. He reported back to work at the Navy Annex the next morning. As the chief planning office within OPNAV, CDR Spence and the others on the N801 staff took the lead on ensuring the Navy was ready to fight. At the end of the month of September, he reported to the N3/N5 staff. The N3/N5 staff had been hardest hit by the attack, and the surviving personnel were serving in family support roles. After filling in for a few weeks to ensure the responsibilities of N5 were met, CDR Spence helped stand up the new OPNAV N31X Future Ops Branch.

In his oral history, CDR Spence discussed the efforts he made to assist the evacuations and medical response. He like many who tried to help that day lamented the lack of firefighting equipment available to them. He also discussed the role he played in the Navy’s efforts to continue on with business as usual after the attacks. He spent some time telling stories that he’d heard from the N3/N5 staff that had been in the Command Center. He also talked about his family and the impact the attacks had on them. 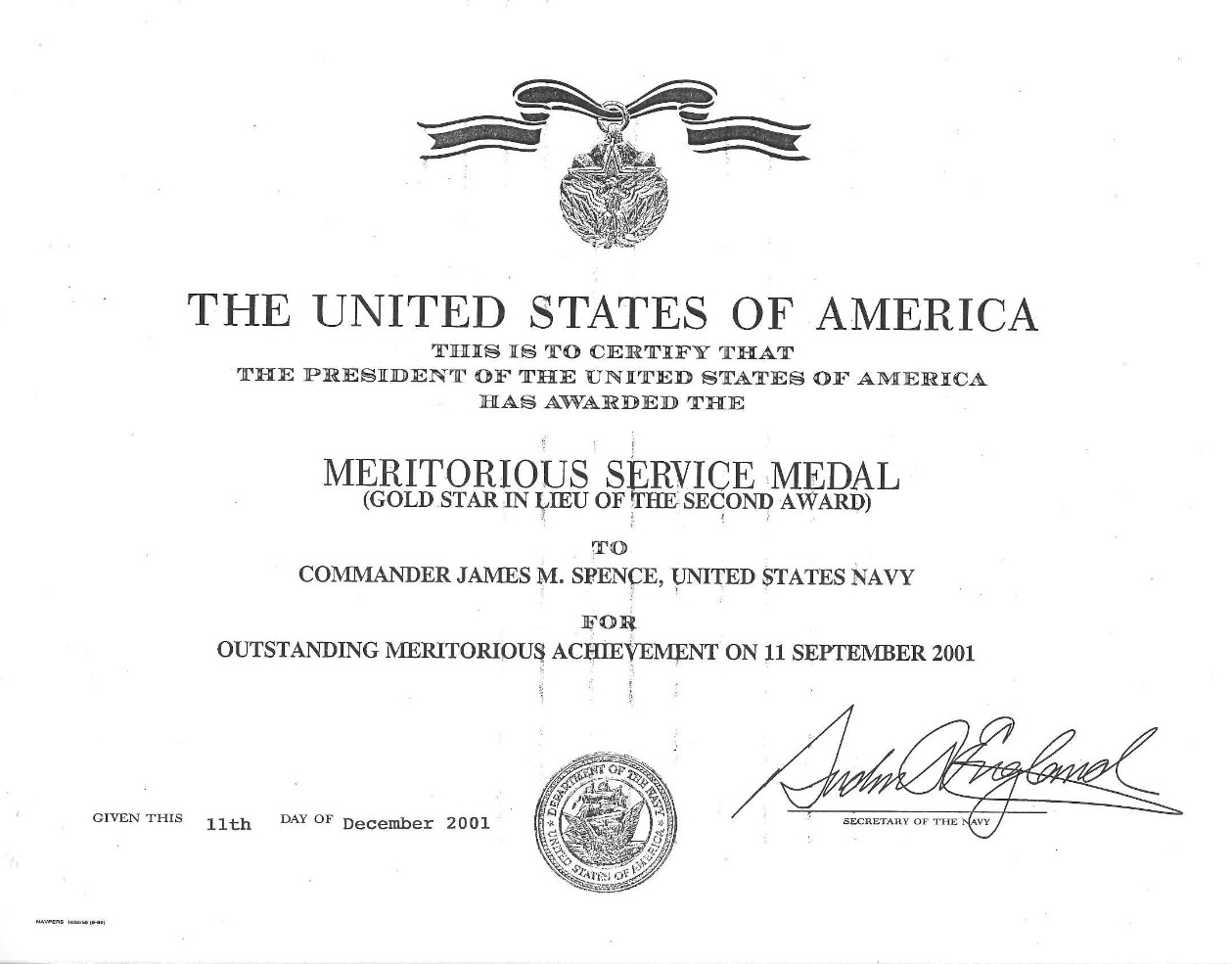 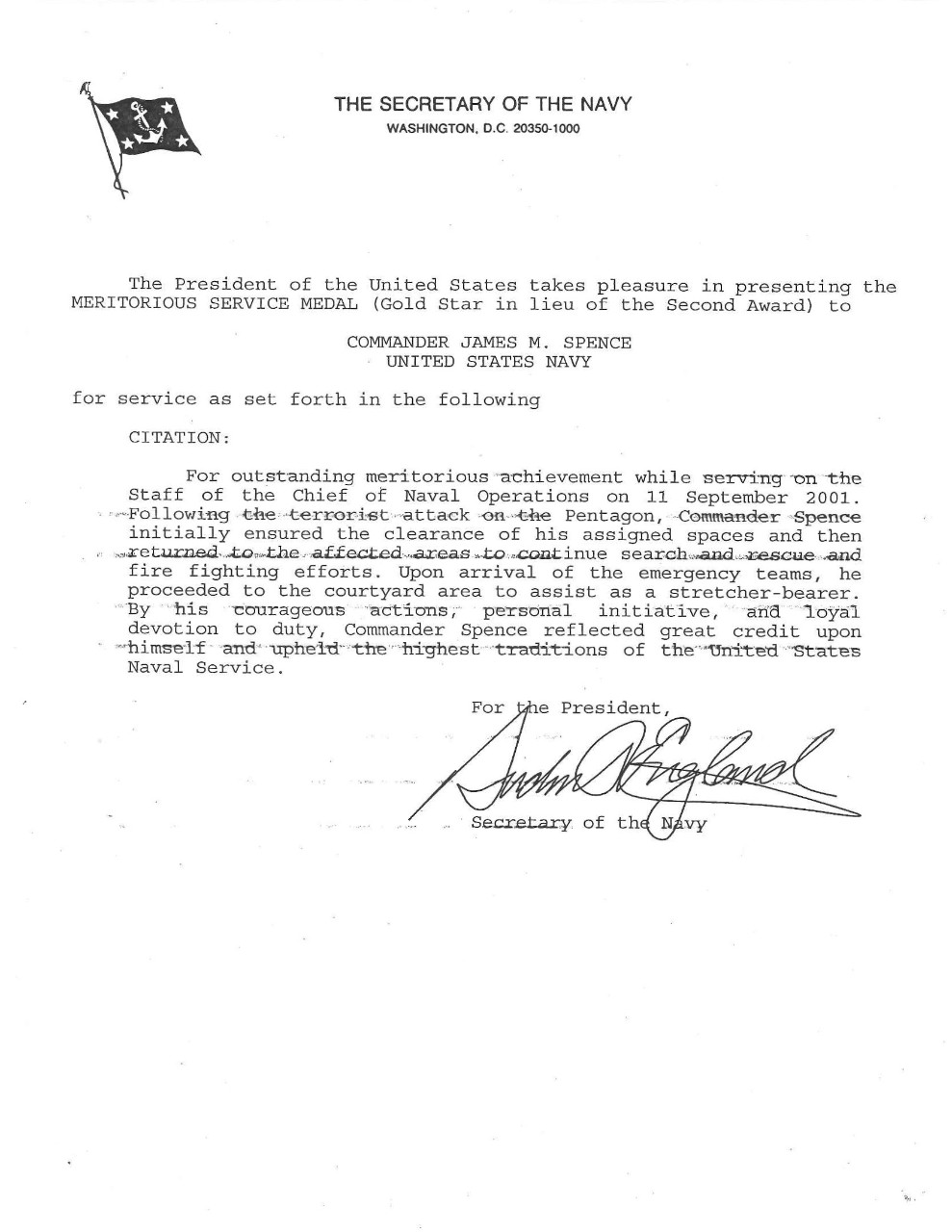