“I just said, 'Well, I’ll just give him mine for now, and I’ll pick up some new ones for myself.' So I put the Lieutenant bars on the chokers for Darin and closed everything up and left and went back to my base.” 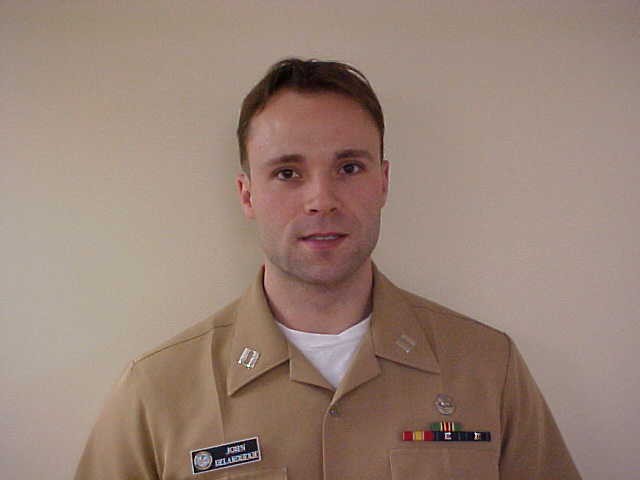 The day of the attack, LT Delaroderie was in the NDW offices in Building 200 on the Washington Navy Yard.  After the attack, he was running errands and performing tasks for the flag officers when he ran into the NDW CACO Coordinator, Barbara MacDonald.  He'd been a CACO before, and he knew that there would be a need for them, so he volunteered to serve as one again.  When they started notifying families late that evening, there weren't enough CACOs for all of the families, so he ended up notifying the families of two different individuals that had been in the Navy Command Center.

The first family LT Delaroderie notified was the family of LT Darin Pontell.  He arrived at their residence around 1:00am the morning of 12 September.  The second family was the family of IS2 Johnnie Doctor.  He arrived at their residence about an hour later, but the wife of IS2 Doctor was not there, so he ended up going back around 4:30am that morning.  Later that day, another CACO was able to take over working with IS2 Doctor's family, so the Pontell family became LT Delaroderie's sole focus.

Over the next week and a half, LT Delaroderie spent nearly every waking moment with the family of LT Pontell.  He worked tirelessly to ensure that they had everything they needed.  When LT Pontell's body was prepared for burial, the individuals who had prepared his uniform did not know that LT Pontell had been posthumously promoted from LTJG to LT.  His uniform reflected the rank of LTJG.  When LT Delaroderie realized this, he removed the bars from his own uniform and placed them on the uniform of LT Pontell.

In his oral history, LT Delaroderie discussed everything he did while serving as the CACO for LT Pontell's family.  Every CACO experience is different and this one was no different. For example, because LT Pontell was Jewish, LT Delaroderie had to ensure that everything the Navy did in preparing his body for burial was in keeping with the Jewish faith.  LT Delaroderie also talked about the family and the dynamics and the way they were all dealing with the grief and the trauma.