At the time of the attack, QM2 Suggs was serving as a military police officer in the OPNAV offices (he handled security access for personnel and other related issues). On the morning of the attack, he was at work at the Pentagon.

QM2 Suggs was awarded the Navy & Marine Corps Medal for his actions on the day of the attack.  This medal is awarded to service members who, while serving in any capacity with the Navy or Marine Corps, distinguish themselves by heroism not involving actual conflict with the enemy. For acts of life-saving or attempted life-saving, it is required that the action involve the risk of one’s own life. It is the highest non-combat decoration for heroism awarded by the Department of the Navy. 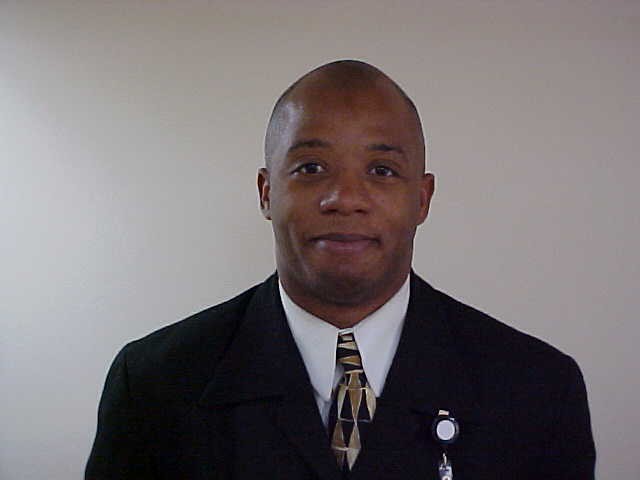 In the moments before the plane hit, QM2 Suggs was in his office on the fourth deck of the A Ring on the north side of the Pentagon. Although he and the others in his office were watching the events unfold in New York, he was not concerned that the Pentagon was a target. The day was going to continue business as usual. Even after the building was hit, he did not immediately think it was a plane. He assumed it was a construction accident. In the following moments, as he prepared to respond, his boss told the office that it was a plane, and his heart stopped.

As he left his office, QM2 Suggs noticed the smoke and headed towards the source. He ran from his office in the A Ring near Corridor 6 to the E Ring around Corridors 4 and 5, which was directly above the point of impact. He helped guide a number of personnel out of the smoke filled offices there and into the Courtyard, which was in line with standard evacuation procedure. After he and a few other Petty Officers felt certain that the fourth deck of the E Ring was clear, they headed out to the Courtyard too in order to clear their lungs with some fresh air.

Quickly though QM2 Suggs was headed back into the building. At that point, he noticed the damage on the lower decks in the area of the Navy Command Center. In particular, he noticed the huge hole in the C Ring wall that had been blown out by the force of the plane pushing through the building. He spent the next couple of hours working with other Navy and Marine Corps personnel of all ranks and rates attempting to save people from the burning Command Center. Their efforts were severely hampered though by the lack of firefighting equipment and breathing apparatuses that were available to them. No matter what they did, the fire kept pushing back.

As QM2 worked with the others trying to rescue personnel from the Command Center, he would take a few moments in the Courtyard to clear his lungs every so often. There, he began getting really mad as he looked around at the injured people who had been evacuated to that area. Everyone he saw had done nothing more than come to work that morning, just like he did. They hadn’t done anything to anybody. And yet, they may not make it home alive. That anger stayed with him throughout the day.

After doing everything they could to help evacuate and rescue personnel, QM2 and the others from his office were ordered to leave the building. After exiting, he was on site for another 14 hours or so performing a number of different tasks assigned to him and his fellow officers. Eventually, he got in his car around 0230 the morning of 12 September and headed home. Somewhere on 395 around the exit for Reagan National Airport, he pulled over, got out of his car, looked at the still-burning Pentagon and cried. He cried for everyone that had been lost that day and everything that he’d been a part of in the aftermath.

In addition to detailing the events of the day as he lived them, QM2 discussed the award he received, the changes to security at the Pentagon following the attack, and his observations and lessons learned. He also discussed the personal impact of the attack and the aftermath. He said, “September 11th brought a lot of things to my head…it let me know, tomorrow’s not promised to anybody…you live life once and live it to the fullest…If you want something, go get it.” 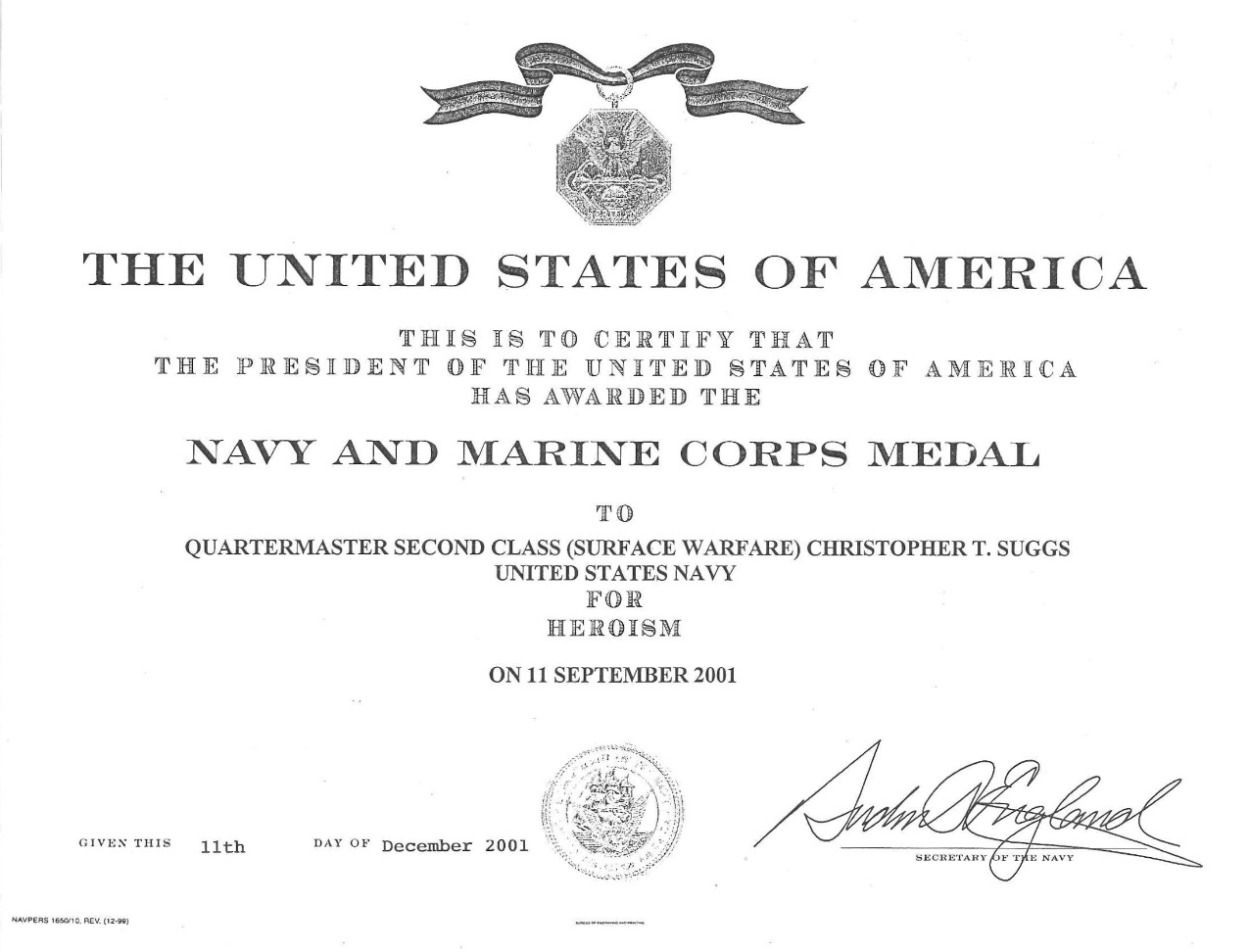 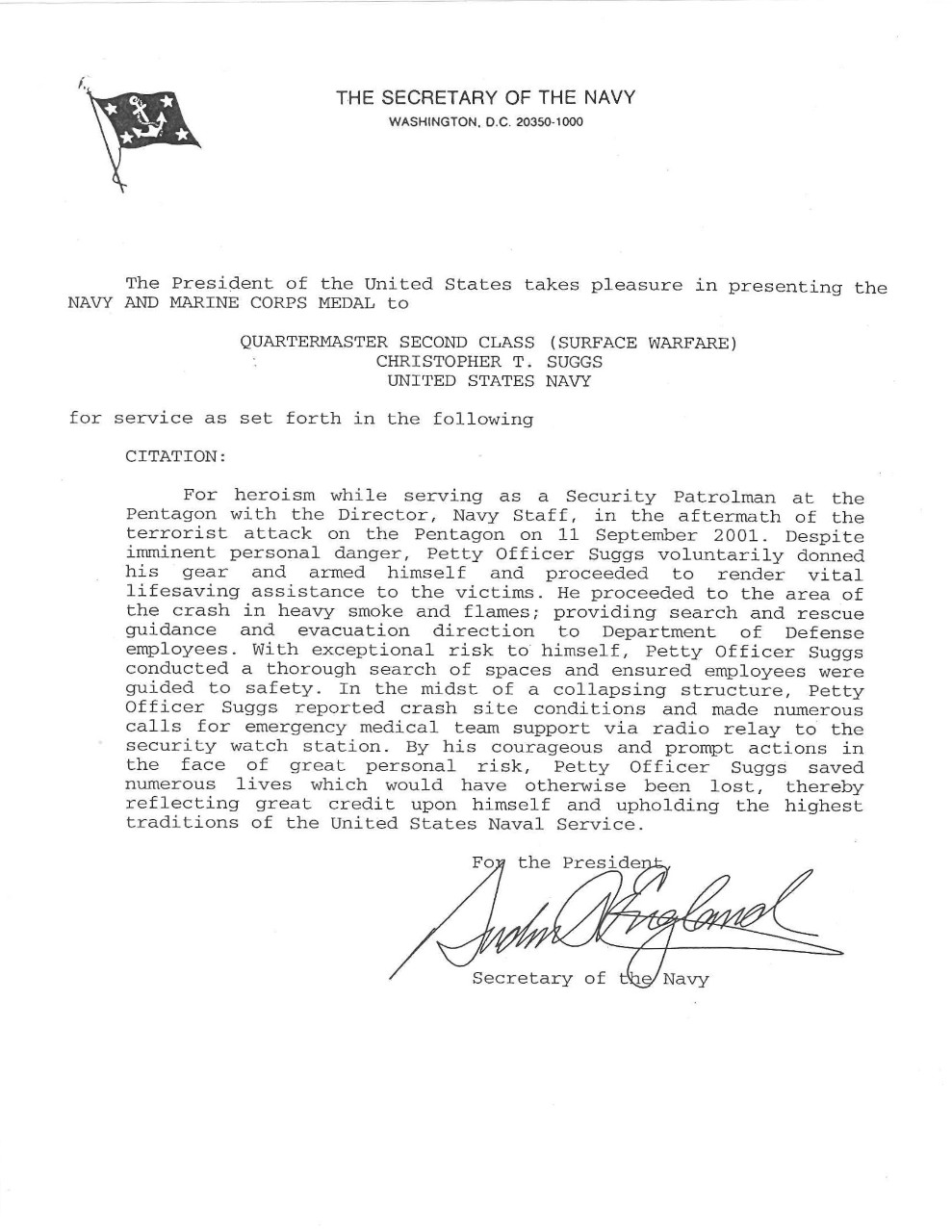