At the time of the attack, Mr. Burchell was serving as a helicopter pilot with the United States Park Police (USPP).  On the morning of the attack, he was at work at the USPP Aviation Squadron office in the Anacostia neighborhood of Washington, D.C. 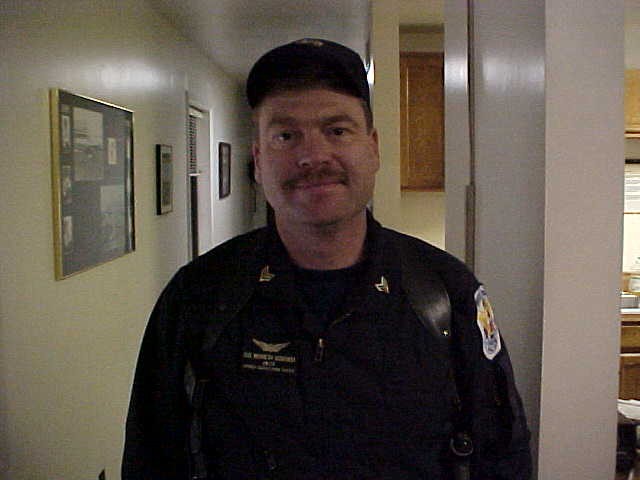 Kenneth Burchell was scheduled for a regular day off on September 11th.  However, he was called into work to help prepare for possible protests during the upcoming meeting of the World Bank in Washington, DC. He was training in a field next to the hangar that housed the US Park Police helicopters when the plane hit the Pentagon. When it was apparent that medevac assistance would be needed at the site of the crash, he assembled a crew and took off. His helicopter was the second Park Police helicopter to be airborne. The first helicopter took a command-and-control position orbiting over the Pentagon while Burchell’s aircraft landed. He sought out the incident command post to offer assistance in airlifting victims. Due to extensive interagency training, the assigned triage officer recognized him and called him “Kenny”. Burchell’s air crew transported two burn victims to Washington Hospital Center. Unfortunately, because of the small number of survivors from the worst hit areas of the building, those were the only two victims that his crew was able to transport.  One of Burchell’s lasting impressions from that day was the conduct of the personnel assigned to the Pentagon. Regardless of rank or military or civilian status, “People just pitched in and did what had to be done.”

In his oral history, in addition to detailing his actions on the day of the attack, Burchell also provided an overview of the history of the USPP and the work they do.  He also discussed the ways the many different law enforcement agencies in Washington D.C. operate and interact with each other.  He also provided details on his own background in law enforcement and the military.