"I'll never forget the look in one man's eye when...I had to look him in the eye and tell him yes, his wife is on the missing list. He hadn't heard from her in 48 hours."

At the time of the attack, CDR Brown-Wahler was working as the Director of Recruiting and Public Outreach in the office of the Deputy Assistant Secretary of Defense for Military Personnel.  On the morning of the attack, she was at work at the Pentagon. 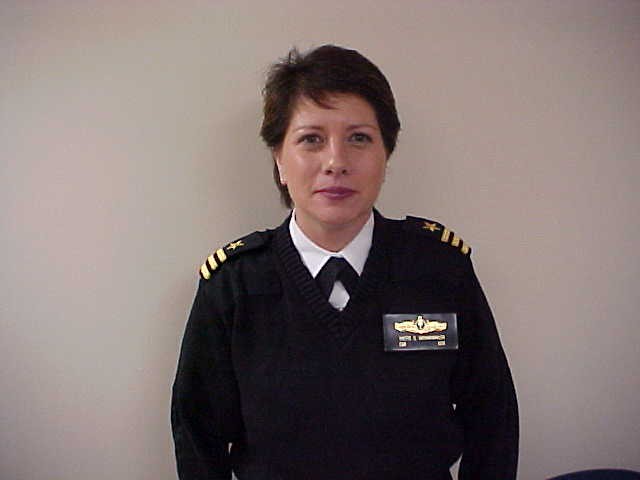 Oral History Summary:
When the plane hit the Pentagon, CDR Brown-Wahler was gathered with some of her colleagues looking at news of the attacks in New York City. Although they felt the physical impact of the plane, they were far enough away from the impact site that she was able to return to her office to answer a few phone calls from concerned family members before she evacuated. After evacuating, she ended up helping several parents look for their children, who had been at the Pentagon Daycare Center. She was able to use her military credentials and knowledge of the area to locate the children at a local park and reunite them with their parents. The following day, after being forced from their office space in the Pentagon due to flooding and fire concerns, she and her colleagues reported to General Van Alstyne, the Deputy Assistant Secretary of Defense for Military Personnel, who had established temporary offices at the Sheraton Crystal City.

At the Sheraton Crystal City, General Van Alstyne was acting as the head of the Pentagon Family Assistance Center (PFAC). The PFAC was set up the Department of Defense Office of Family Policy as a central base of support and information for the families of the victims.  Since CDR Brown-Wahler was acting as a flag aide to General Van Alstyne, she was closely involved with the day to day operations of the PFAC.  CDR Brown-Wahler had been asked to return to her job a few times since she began working with the families. Even after the PFAC was officially shut down on 12 October, she still continued her work.  On 13 October, the successor to PFAC, the Pentagon Family Assistance Resource and Referral office (PFARRO) began providing assistance to the families out of the Office of Family Policy.  After PFARRO was shut down in November, she stayed on in the Office of Family Policy as a one-man operation providing support to the families.  When she began transitioning out of the position in January 2002, the position was filled by CAPT Steve O'Brien, who'd run the Navy Liaison Office at Dover Port Mortuary.

In her oral history, CDR Brown-Wahler detailed all of the work she had done assisting families since the day of the attack. She also detailed the planning and logistics strategies the team stablished to help the center run smoothly and effectively. She also discussed the personal impact of working with the families and the lessons on human nature and behavior she learned as a result of the work. She also discussed her future in the Navy and her new assignment as commanding officer of USS CHAFEE (DDG-90).

PFAC Handout: Descriptions of Organizations and Services Available to the Families at the PFAC, 2 October 2001 (PDF, 170kb)