"I wish I could walk away from this and be brainwashed and have my memory wiped out from my experience here. But another side of me says this is probably the most important thing you’ll ever do in your life.”

At the time of the attacks, CMDCM Bond was serving as the Senior Enlisted Advisor to Navy MWR at Navy Personnel Center PERS 65 in Millington, TN.  On the morning of the attack, he was at a conference in Leesburg, Virginia, approximately 40 northwest of the Pentagon. 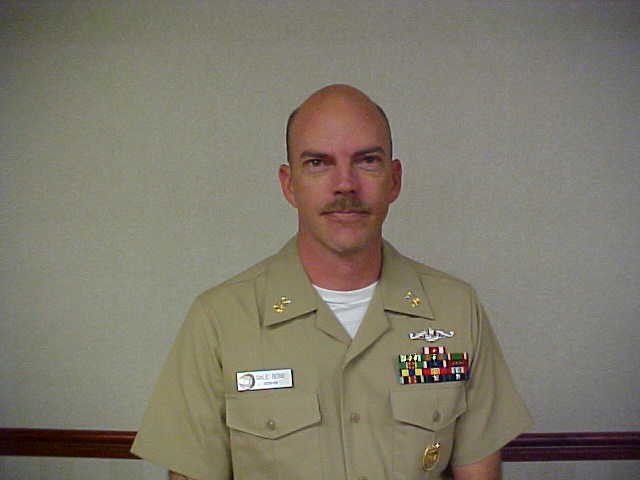 CMDCM Bond’s oral history is incredibly in-depth and revealing on many different levels. His extraordinary self-awareness is evident throughout. As a result, his oral history feels both extremely genuine and extremely profound.

On the morning of the attack, CMDCM Bond was attending a conference in Northern Virginia. In the hours following the attack, he was tasked with setting up the Navy Liaison office to handle mortuary affairs at Dover. The Dover Port Mortuary at Dover Air Force Base in Delaware handles all mortuary affairs for the Department of Defense. It would be the location where all remains recovered from the Pentagon would be processed and identified. Although CMDCM Bond had no experience managing such efforts and, in his own words, barely knew how to spell mortuary, he was assigned the task because he was Navy Personnel Command’s only representative on the East Coast at the time.

Upon receipt of his new orders, he picked up the other individual from PERS-6 who would work with him, PN1 Prince Brown, and the two headed to Dover. While driving to Dover, the two devised a plan of action. That plan, along with some office supplies, was all they had when they arrived at the mortuary. Despite their lack of experience and the lack of any real instruction, they were able to successfully carry out their mission.

In his oral history, CMDCM Bond discussed the experiences he had while working at Dover and the work he did with PN1 Brown and CAPT Steve O’Brien, who was running the liaison office for Naval District Washington. He specifically highlighted the extraordinary service of both Brown and O’Brien. When reflecting on the easy, yet productive dynamic the three of them quickly found despite being strangers to each other, CMDCM Bond said, “I must have lived a charmed life somewhere else and done great things, because I do not deserve the blessings I’ve had in this life.”

CMDCM Bond candidly and openly discussed the day to day work. He discussed the emotional and mental impact and toil of the work and the high stress levels he had to manage on a daily basis. Despite that, he mentioned time and again that the work he was doing at Dover was the most important work he’d ever done or would ever do. He talked about the importance of supporting the families of the victims, recognizing that everything they did was for those families, and ensuring that nothing they did would cause the families any extra stress, anxiety, or grief.

He also highlighted the support he received from his chain of command despite the lack of instruction, procedures, or guidance. They were instrumental in allowing CMDCM Bond the freedom to operate and make the calls he felt were right, including his decision to bury or cremate a set of medals with the remains of every active duty and reservist that died while serving in the Navy. On the other hand, he highlighted several instances when individuals in other commands created problems and frustrations. Among the most important lessons he highlighted was the importance of team building, teamwork, working as one towards a common purpose, and selfless dedication to the task at hand.