"I thought it fascinating that when I got down to the Navy Command Center, the guys who were there were the surface warfare guys. They didn't work in that direct area. But there's something to do with spending as long as we spend on ships, learning how to deal with a major conflagration, it was natural that the SWOs gravitated into ground zero."

At the time of the attack, CDR Wetherald was serving as the N76 Surface Warfare Analyst in the OPNAV N80 Financial Programming office.  On the morning of the attack, he was at work at Pentagon.

CDR Wetherald was awarded the Navy and Marine Corps Medal for his actions on the day of the attack.  This medal is awarded to service members who, while serving in any capacity with the Navy or Marine Corps, distinguish themselves by heroism not involving actual conflict with the enemy. For acts of life-saving or attempted life-saving, it is required that the action involve the risk of one’s own life. It is the highest non-combat decoration for heroism awarded by the Department of the Navy. 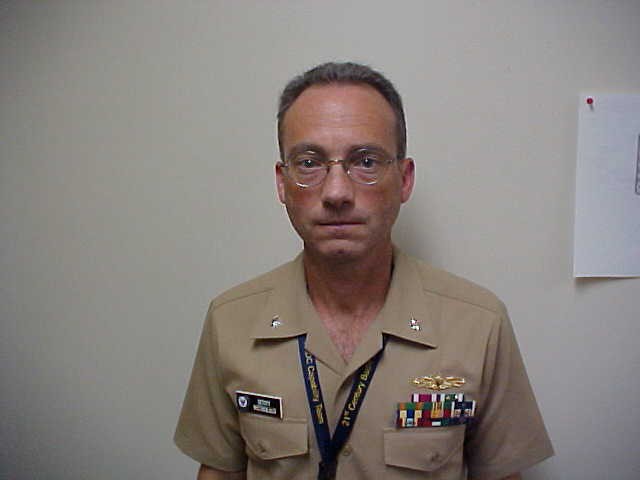 CDR Wetherald was one of many Surface Warfare Officers (SWOs) who headed directly into the smoke and flames in the moments after the attack.  When the plane hit, he was in the N80 office on the fourth deck of the D Ring just off of Corridor 4.  He knew immediately that it was a plane, because he could smell the jet fuel.  When they evacuated into Corridor 4, it was already filling with smoke.  Instead of turning right and heading directly towards the inner courtyard and safety, CDR Wetherald turned left towards the E Ring.  He was joined by another member of the N80 staff, CDR Spence.

When they got to the E Ring, they did everything they could to try to ensure all of the offices off of Corridors 4 and 3 were clear.  Eventually their efforts were hindered by the lack of proper equipment, so they exited down towards the inner courtyard.  At that point, someone came yelling that they needed help in the alley between C and B Rings.  By the time CDR Wetherald reached the alley, he witnessed the last couple of individuals jumping from the Army offices on the second deck.  He then noticed the large hole that had been blasted in the outer wall of the C Ring.  The location of the hole aligned with the Navy Command Center.

In the alley, he saw LT Humbert, who had just escaped from the CNO Intelligence Plot, a secure office space within the Navy Command Center.  She told CDR Wetherald there were several people still trapped in a private office within the CNO IP.  CDR Wetherald could see a path in, so he grabbed fire extinguishers and began working towards the private office with another person.  Soon, they had a group of people rotating in and out with fresh fire extinguishers.  On his last trip in, CDR Wetherald's fire extinguisher ran out and the flames grew back immediately.  When he went to exit, the flames had sprung up behind him as well.  He had to run through orange smoke to get out.

At that point, even though he was coughing severely, CDR Wetherald tried to find another way in.  He knew the layout of the first deck well enough to look for a corridor that he felt would let him go around the fire and get to the damaged area from the other side.  He grabbed a golf club from the rubble and started banging on doors in the C Ring.  When he didn't get a response, he went back out to B Ring and found a water hose.  His efforts were in vain though.  When a firefighter showed up, CDR Wetherald begged him to help rescue the people CDR Wetherald felt were possibly still alive but trapped.  But there was nothing the firefighter could do.  The fires caused by the jet fuel were burning out of control.

CDR Wetherald exited out of the Pentagon and met up with RADM Balisle.  CDR Wetherald ended up going home with RADM Balisle since they were sure to be able to establish a base of communications there.  Once there, CDR Wetherald's wife had someone call and demand that he go to the hospital.  He went that afternoon and was treated for smoke inhalation.  He suffered from decreased lung capacity afterwards.

Beyond detailing his experiences on the day of the attack, CDR Wetherald also discussed many of the ins and outs of his job.  He talked about the unrelenting schedule they were working before the attack and the added pressures they had to face afterwards.  He talked about the psychological trauma he knew he had suffered as a result of the attack and the issues he faced balancing his work schedule and the need for time to heal mentally and physically. 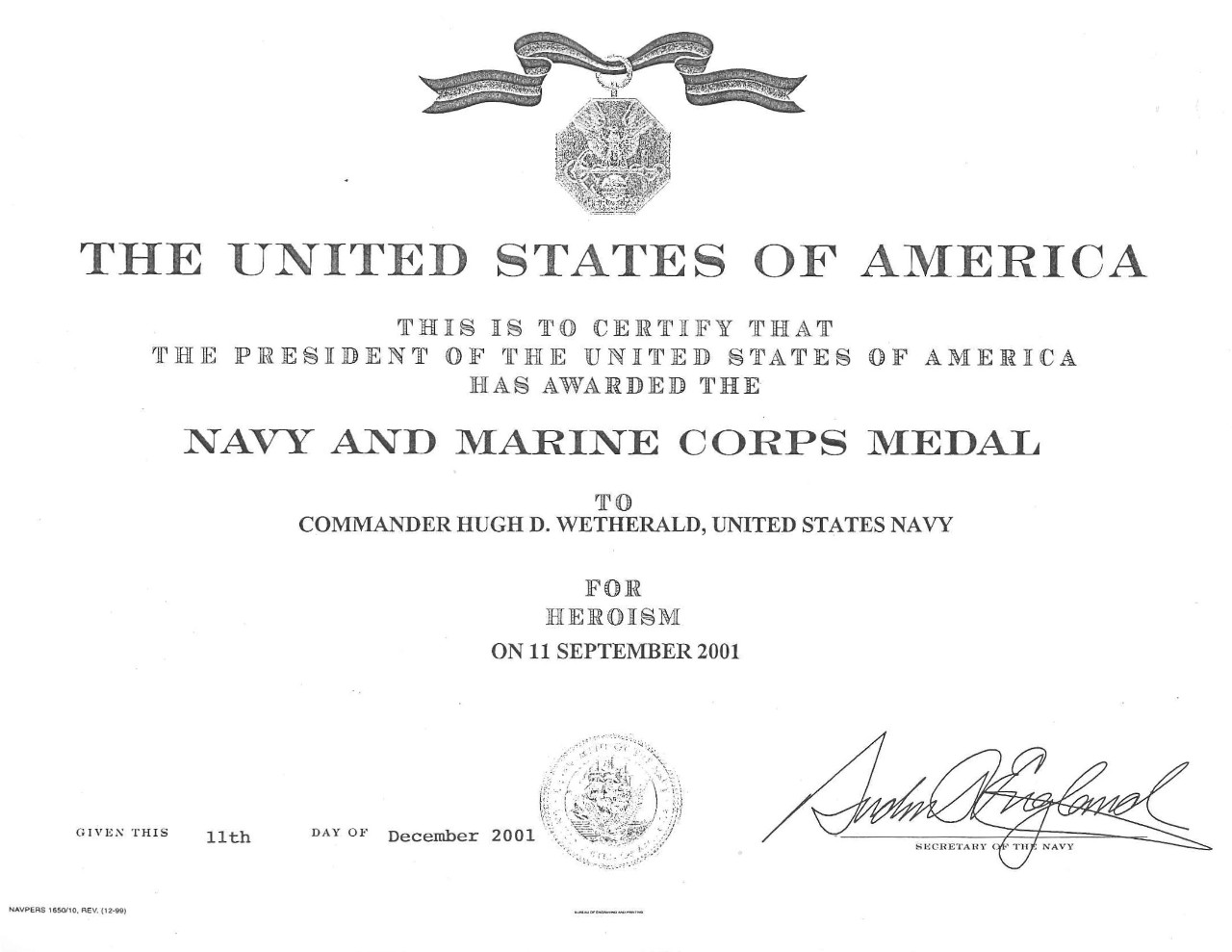 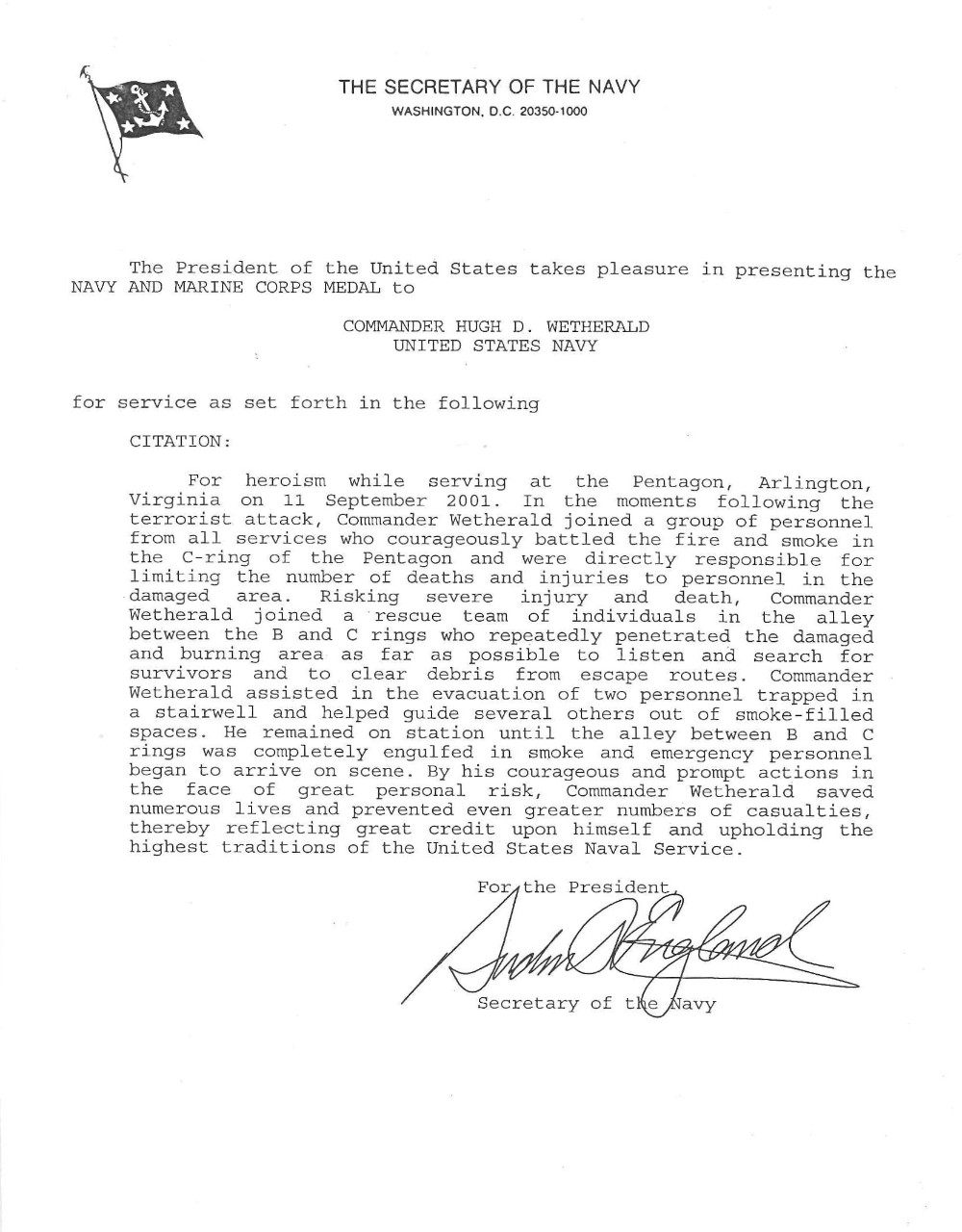