At the time of the attack, CAPT Croy was serving in the Force Air Defense Branch of OPNAV N76 Surface Warfare.  On the morning of the attack, he was at work at the Pentagon.

CAPT Croy was awarded the Navy and Marine Corps Medal for his actions on the day of the attack.  This medal is awarded to service members who, while serving in any capacity with the Navy or Marine Corps, distinguish themselves by heroism not involving actual conflict with the enemy. For acts of life-saving or attempted life-saving, it is required that the action involve the risk of one’s own life. It is the highest non-combat decoration for heroism awarded by the Department of the Navy. 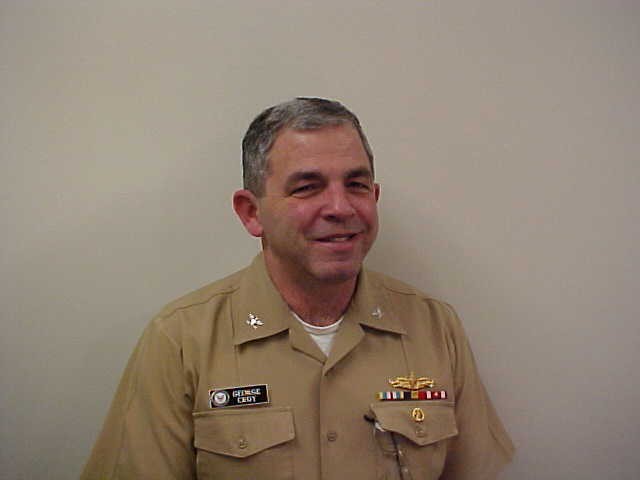 CAPT Croy was on the phone with his wife in his office on the fifth deck of the B Ring between Corridors 4 and 5 when the plane hit. According to his wife, he immediately yelled, "Hit the deck! Get away from the windows!" After telling her he needed to go because they just had an explosion, he and the others in the office evacuated out of any emergency exit to the alley between C and B Rings.  He worked with others to help individuals who were jumping from windows on the second deck.  Then he decided to collect some firefighting equipment and try to enter the C Ring.  At that moment, he judged that fire was tame enough that they'd be able to get in and help with rescue.  But in the few minutes he took to gather the equipment, the fire was continuously growing into an out of control inferno.  That did not deter him or the others working in the alley though.  He along with the others began trying to clear the debris out of one of the other holes that had blown out of the C Ring wall.  They made it into an area of the destroyed Navy Command Center and began calling out to try and locate survivors.  He and the others ended up helping a number of people get to safety before the building crashed around them.

After staying in the alley until he was sure there were no more people to be rescued, CAPT Croy began making his way home to Alexandria.  At this point, he was covered in soot and ash and blood.  He didn't have a phone and driving wasn't possible, so he began walking down the George Washington Parkway.  As he walked, someone got word to his wife that he was walking home down the parkway, so she called a neighbor to ask him to go look for him.  The neighbor drove up and found CAPT Croy.  When CAPT Croy got into his vehicle, the neighbor first offered him his choice between two bottles of alcohol.  Then he took in CAPT Croy's physical state and immediately drove him to the hospital where his wife worked as a nurse. Thankfully, CAPT Croy was physically okay.

In his oral history, CAPT Croy credited his Navy training with knowing up to move through the heavy smoke. He talked about the extreme pride he felt after witnessing his Navy peers from OPNAV in action on the day.  He also discussed his previous experiences with bombings in the United States, including Oklahoma City and the Atlanta Olympics. He also provided a long list of lessons learned. 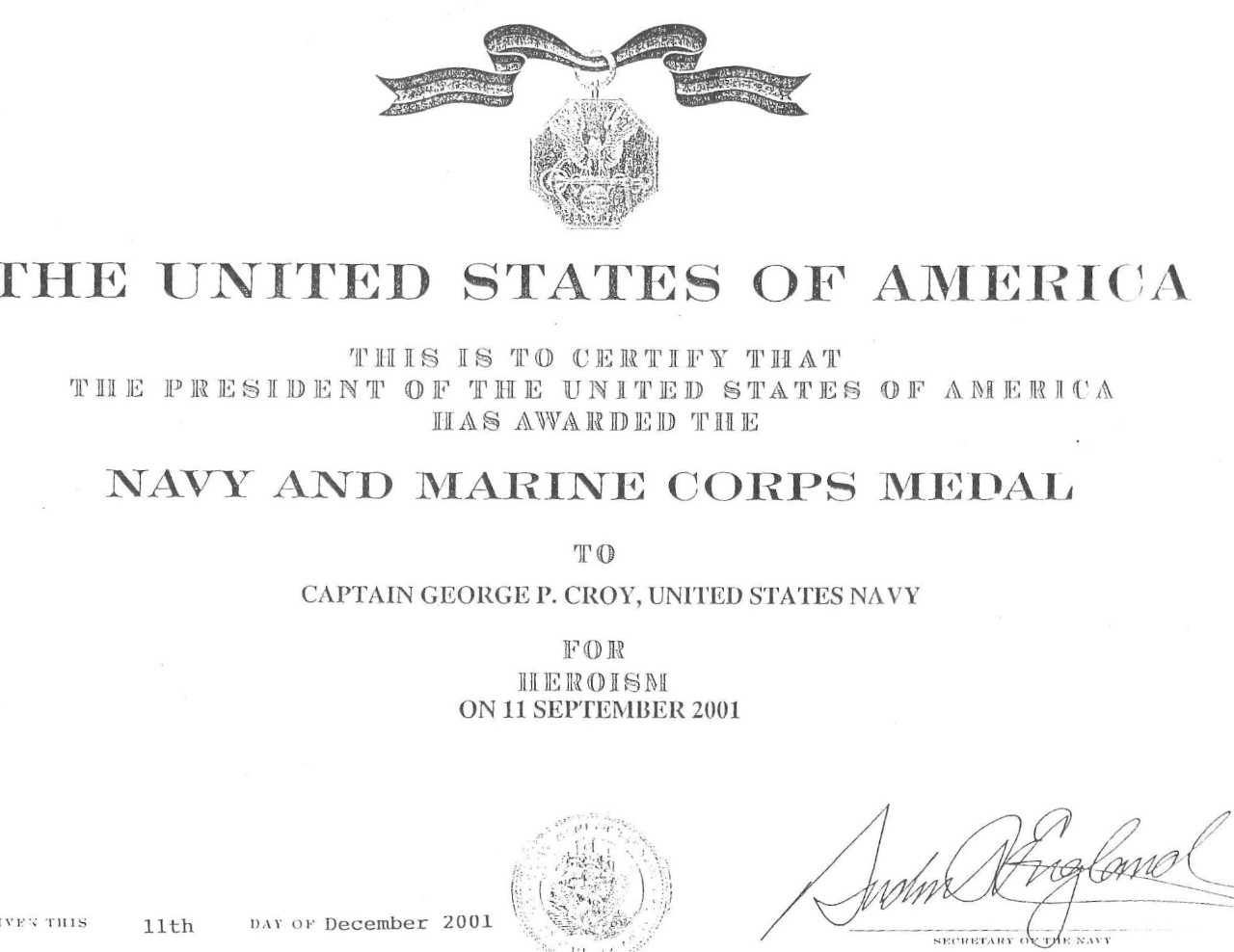 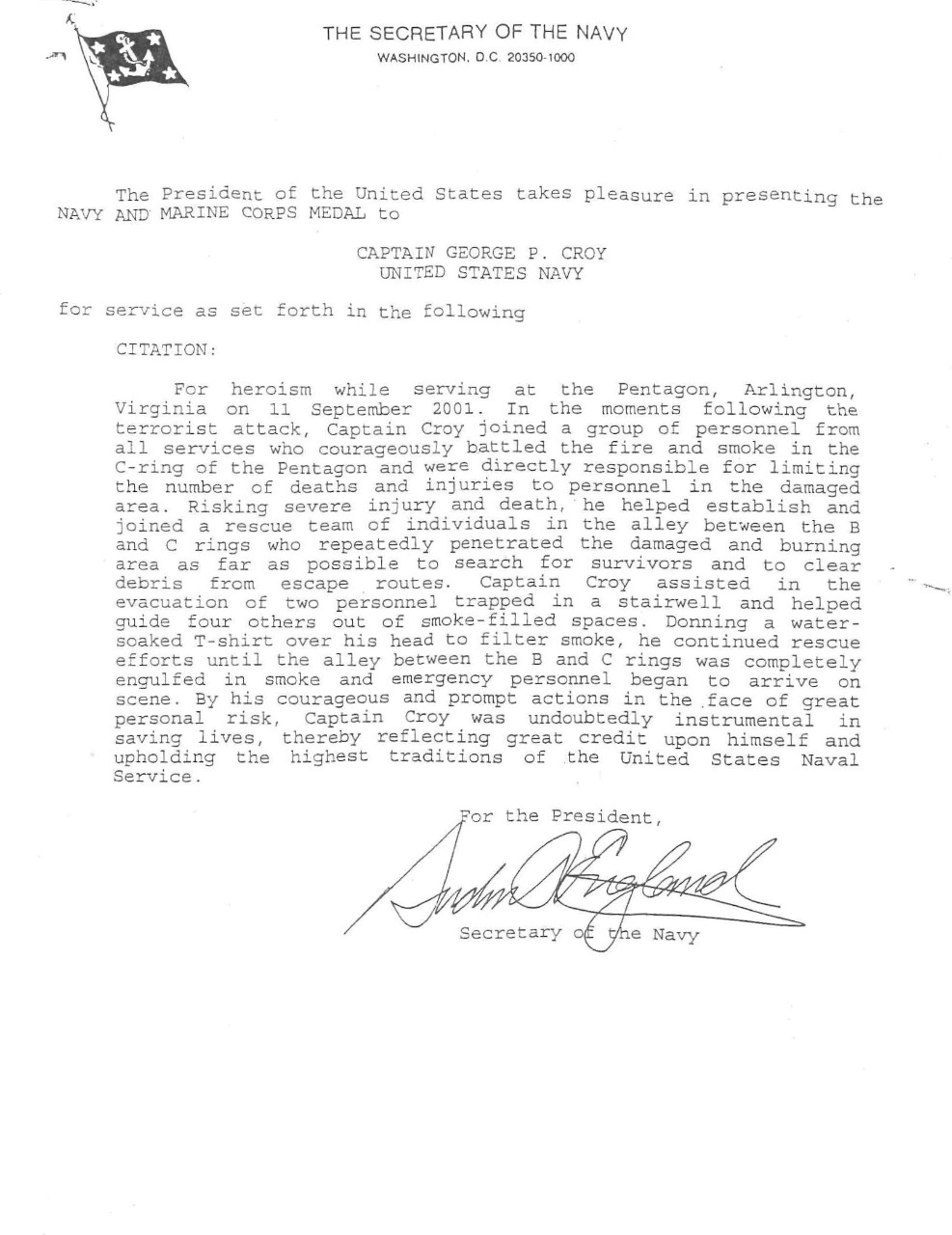