Donald W. Panek’s diary is held in the Historic Manuscript Collection of the Navy Department Library.

We thank Donald W. Panek and family for their generous donation of this diary.

Scope and Content: Donald D. Panek served aboard USS Revenge (AM-110), a minesweeper that  participated in the invasion of Okinawa and related events from March through June 1945. Panek’s diary runs from mid-March through early September 1945. He provides a detailed record of events, including an account of the sinking of USS Skylark (AM-63) on 28 March 1945, which, thanks to the efficient rescue work of Revenge and USS Sage (AM-111), suffered only five deaths. See Dictionary of American Naval Fighting Ships, Revenge VI (AM-110). 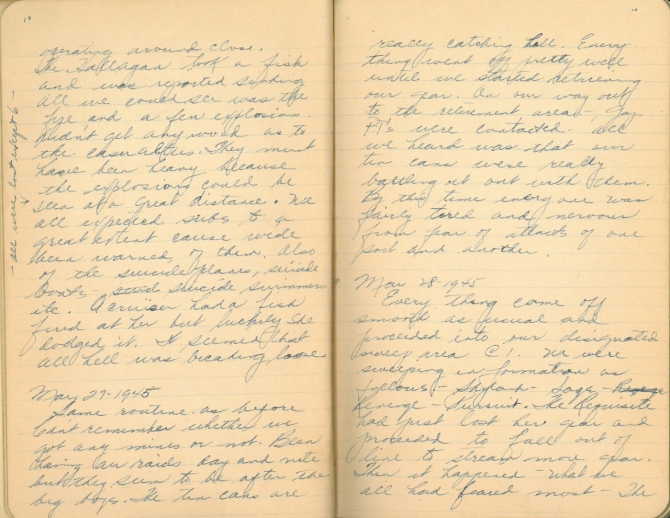 [Toward the evening many midget subs were reported] operating around close. The Hallagan took a fish [torpedo] and was reported sinking. All we could see was the fore and a few explosions. Didn’t get any word as to the casualties. They must have been heavy because the explosion could be seen at a great distance. [Inserted in left margin: “All were lost except six.”] We all expected subs to a great extent cause wede [sic] been warned of them. Also of the suicide planes, suicide boats—suicide swimmers etc. A cruiser had a fish fired at her but luckily she dodged it. It seemed that all hell was breaking loose.

Same routine as before. Can’t remember whether we got any mines or not. Been having air raids day and nite [sic] but they seem to be after the big boys. The tin cans are really catching hell. Everything went off pretty well until we started retrieving our gear. On our way out to the retirement area—Japs PT’s were contacted. All we heard was that our tin cans were really battling it out with them. By this time everyone was fairly tired and nervous from fear of attacks of one sort and another.

Everything came off smooth as usual and proceeded into our designated sweep area @1. We were sweeping in formation as follows—Skylark–Sage–Revenge–Pursuit. The Requisite had just lost her gear and proceeded to fall out of line to stream more gear. Then it happened—what we all had feared most—the 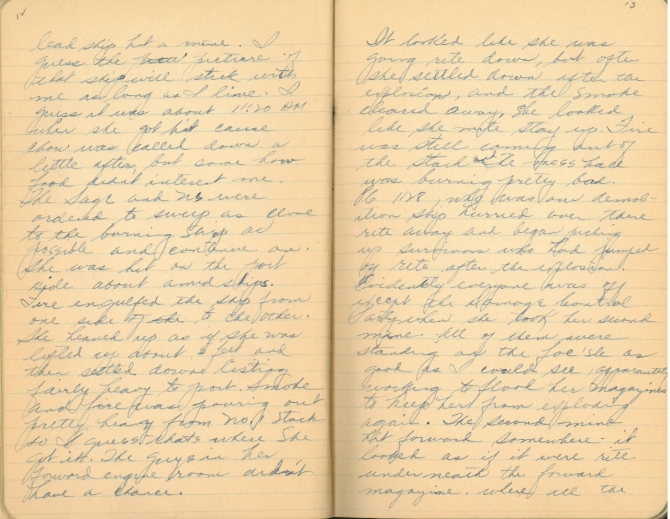 lead ship hit a mine. I guess the picture of that ship will stick with me as long as I live. I guess it was about 11:20 AM when she got hit cause chow was called down a little after, but somehow food didn’t interest me. The Sage and us were ordered to sweep as close to the burning ship as possible and continue on. She was hit on the port side about amid ships. Fire engulfed the ship from one side to the other. She leaned up as if she was lifted up about 5 feet and then settled down listing fairly heavy to port. Smoke and fire was pouring out pretty heavy from no. 1 stack so I guess that’s where she got hit. The guys in her forward engine room didn’t have a chance. It looked like she was going rite [sic] down, but after she settled down after the explosion, and the smoke cleared away, she looked like she mite [sic] stay up. Fire was still coming out of the stack and the mess hall was burning pretty bad. PG 1128 [?], who was our demolition ship hurried over there rite [sic] away and began picking up survivors who had jumped off rite [sic] after the explosion. Evidently everyone was off except for the damage control party when she took the second mine. All of them were standing on the foc’sle as good as I could see, apparently working to flood her magazines to keep her from exploding again. The second mine hit forward somewhere—it looked as if it were rite [sic] underneath the forward magazine, where all the 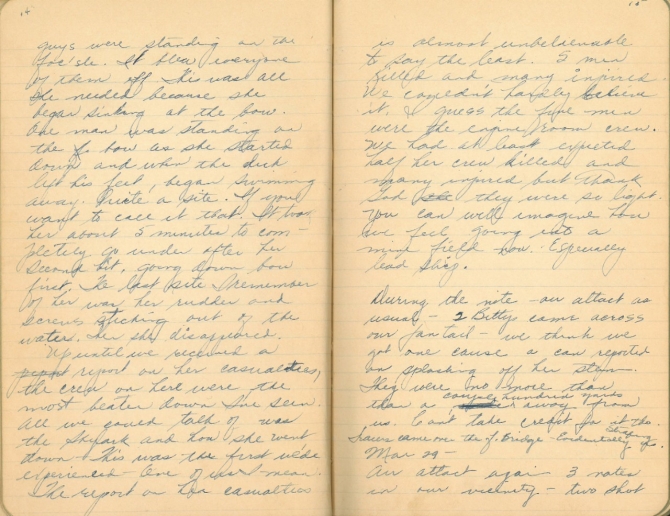 guys were standing on the foc’sle. It blew every one of them off. This was all she needed because she began sinking at the bow. One man was standing on the bow as she started down and when the deck left his feet, began swimming away. Quite a site [sic]. If you want to call it that. It took her about 5 minutes to completely go under after her second hit, going down bow first. The last site [sic] I remember of her was her rudder and screws sticking out of the water. Then she disappeared.

Up until we received a report on her casualties, the crew on here were the most beaten down I’ve seen. All we could talk of was the Skylark and how she went down. This was the first we’de [sic] experienced—one of us I mean.

The report of the casualties is almost unbelievable to say the least. 5 men killed and many injured. We couldn’t hardly believe it. I guess the five men were the engine room crew. We had at least expected half her crew killed and many injured but thank God they were so light. You can well imagine how we feel going into a mine field now. Especially lead ship.

During the nite [sic]—an attack as usual—2 Bettys came across our fan tail—we think we got one cause a can reported on splashing off her stern. They were no more than a couple hundred yards away from us. Can’t take credit for it tho [sic]. Tracers came over the F. Bridge—Evidentally [sic] strafing us.

Our attack again 3 nates [Japanese fighter aircraft] in our vicinity—two shot [down]. 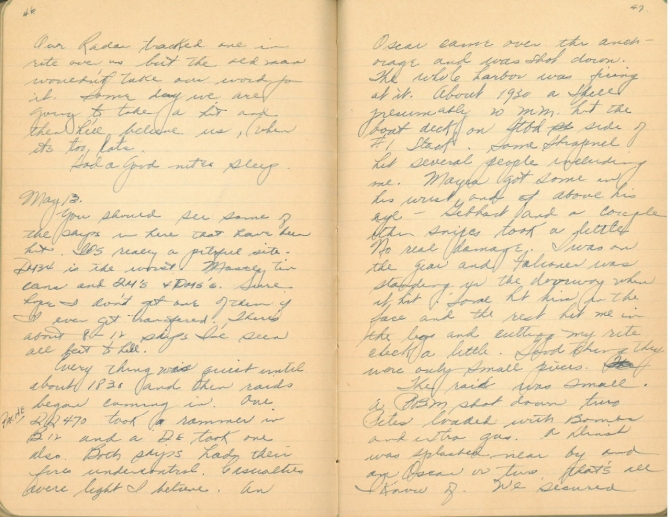 Our Radar tracked one in rite [sic] over us but the oed [?] man wouldn’t take our word for it. Someday we are going to take a hit and then he’ll believe us, when it’s too late.

Had a good nite’s [sic] sleep.

You should see some of the ships in here that have been hit. It’s really a pitiful site [sic]. D434 is the worst. Mostly tin cans and QM’s [?] and DMs’s. Sure hope I don’t get one of them if I ever get transferred. There’s about 8–12 ships I’ve seen all beat to hell.

Everything was quiet until about 1830 and then raids began coming in. One Pache DD470 took a rammer in B12 and a DE took one also. Both ships had their fires under control. Casualties were light I believe. An Oscar came over the anchorage and was shot down. The whole harbor was firing at it. About 1930 a shell presumably 20 mm hit the boat deck on stbd side of #1 stack. Some shrapnel hit several people including me. Mayca got some in his wrist and above his eye—Gebhart and a couple other snipes took a little. No real damage. I was on the gear and Falconer was standing in the doorway when it hit. Some hit him in the face and the rest hit me in the legs and cutting my rite [sic] cheek a little. Good thing they were only small pieces.

The raid was small. A PBM shot down two Petes loaded with bombs and extra gas. A [illegible] was splashed near by and an Oscar or two, that’s all I know of. We secured 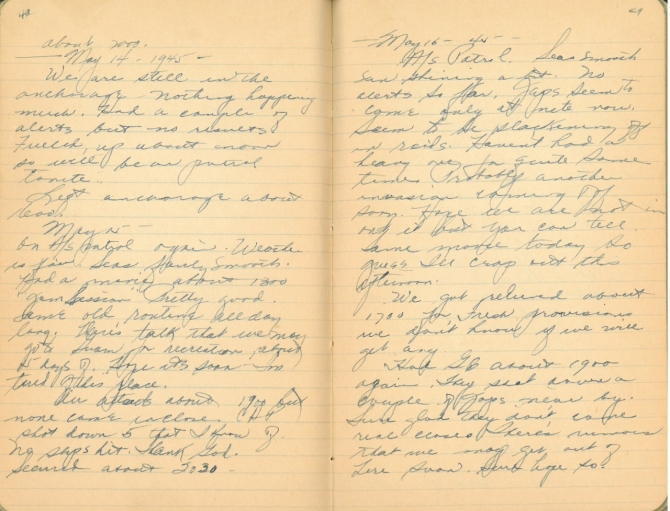 We are still in the anchorage. Nothing happening much. Had a couple of alerts but no results. Fueled up about noon so we’ll be on patrol tonite [sic].

On Afs patrol again. Weather is fair. Seas fairly smooth. Had a movie about 1300 “Jam Session.” Pretty good. Same old routine all day long. There’s talk that we may go to Guam for recreation, about 5 days of. Hope it’s soon—I’m tired of this place.

Afs patrol. Seas smooth. Sun shining a bit. No alerts so far. Japs seem to come only at nite [sic] now. Seem to be slackening off on raids. Haven’t had a heavy one for quite some time. Probably another invasion coming off soon. Hope we are not in on it but you can tell. Same movie today so guess I’ll crap out this afternoon.

We got secured about 1700 for fresh provisions. We don’t know if we we’ll get any.

Had GQ about 1900 again. They shot down a couple Japs near by. Sure glad they don’t come real close. There’s rumors that we may get out of here soon. Sure hope so. 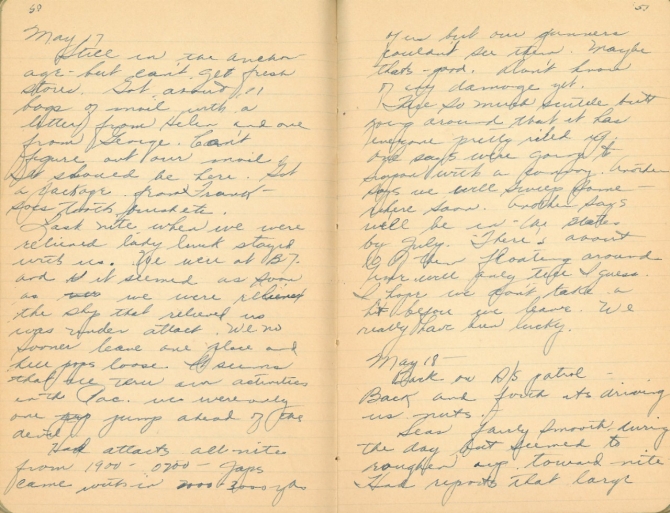 Still in the anchorage—but can’t get fresh stores. Got around 11 bags of mail with a letter from Helen and one from George. Can’t figure out our mail [illegible] should be here. Got a package from Frank—socs [sic] tooth brush etc.

Last nite [sic] when we were relieved lady luck stayed with us. We were at B7 and it seemed as soon as we were relieved the ship that relieved us was under attack. We no sooner leave one place and hell pops loose. It seems that all thru our activities in the Pac. We were only one jump ahead of the devil.

There’s so much scuttlebutt going around that it has everyone pretty riled up. One says we’re going to Japan with a convoy. Another says we will [illegible] somewhere soon. Another says we’ll be in the states by July. There’s about 10 of these floating around [illegible], well only [illegible] I guess. I hope we don’t take a hit before we leave. We really have been lucky.

Back on Afs patrol. Back and forth it’s driving us nuts.

Seas fairly smooth during the day but seemed to roughen up toward nite [sic]. Had reports that large [raids are expected all nites [sic].]