We thank Thomas J. Beatty for the generous donation of his father’s diary.

Biographical Sketch: Joseph A. Beatty was inducted into the US Navy on 6 September 1943 in Brooklyn, New York, and was discharged in San Pedro, California, on 21 March 1946. He served on board USS Remey (DD-688) and attained the rank of Quartermaster Second Class.

Scope and Content: Beatty’s diary covers the period from 31 May 1944 through 1 October 1945. It records Beatty’s service on board USS Remey (DD-688), including a description of the Battle of Leyte Gulf on 25 October 1944. The first three pages of Beatty’s diary are shown below. 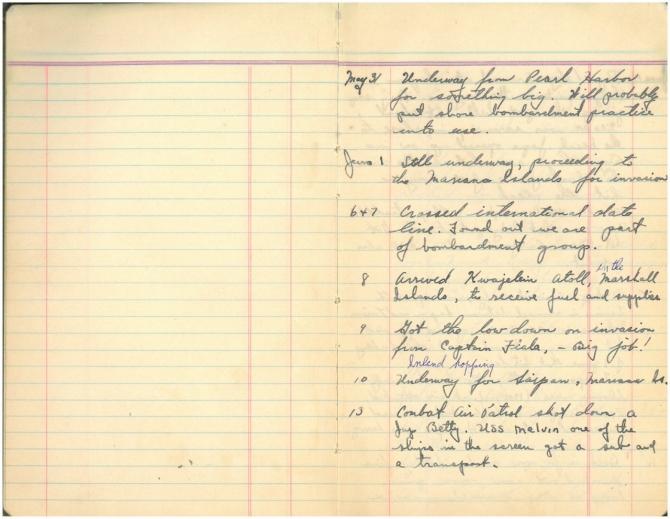 May 31. Underway from Pearl Harbor for something big. Will probably put shore bombardment practice into use.

June 1. Still underway, proceeding to the Mariana Islands for invasion.

6 & 7. Crossed international date line. Found out we are part of bombardment group.

8. Arrived Kwajalein Atoll, in the Marshall Islands, to receive fuel and supplies.

9. Got the low down on invasion from Captain Fiala, – Big job!

10. Underway for Saipan, Mariana Is.

13. Combat Air Patrol shot down a Jugs Betty. USS Melvin one of the ships in the screen got a sub and a transport. 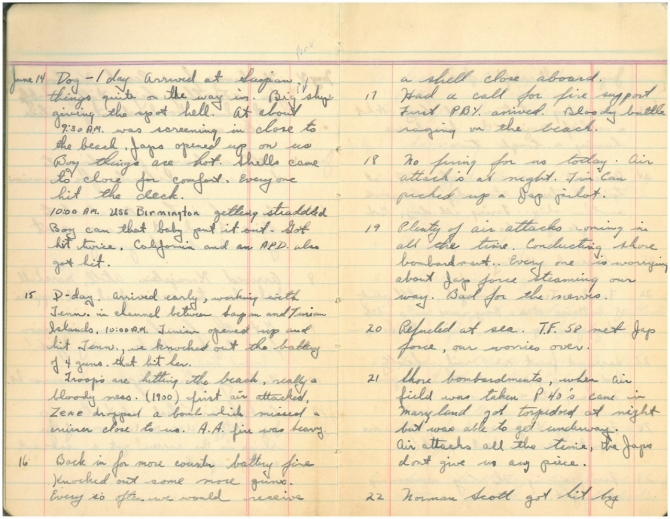 June 14. Dog – 1 day arrived at Saipan. Things quite on the way in. Big ships giving the spot hell. At about 9:30 A.M. was screening in close to the beach. Japs opened up on us. Boy things are hot. Shells came to [sic] close for comfort. Everyone hit the deck. 10:00 A.M. USS Birmington getting straddled. Boy can that baby put it out. Got hit twice. California and an A.P.D. also got hit.

15. D-day. Arrived early, working with Tenn. In channel between Saipan and Tinian Islands. 10:00 A.M. Tinian opened up and hit Tenn., we knocked out the battery of 4 guns. That hit her. Troops are hitting the beach, really a bloody mess. (1900) first air attacked, Zeke dropped a bomb which missed a cruiser close to us. A. A. fire was heavy.

16. Back in for more counter battery fire. Knocked out some more guns. Every so often we would receive a shell close aboard.

17. Had a call for fire support. First PBY arrived. Bloody battle raging on the beach.

18. No firing for us today. Air attack is at night. Tin Can picked up a Jap pilot.

19. Plenty of air attacks coming in all the time. Conducting shore bombardment. Everyone is worrying about Jap force steaming our way. Bad for the nerves.

21. Shore bombardments, when air field was taken P 40’s came in. Maryland got torpedoed at night but was able to get underway. Air attacks all the time, the japs don’t give us any piece [sic].

22. Norman Scott got hit by 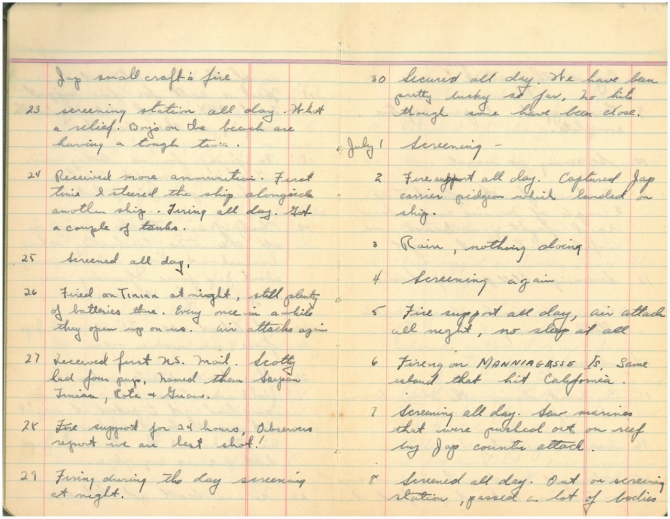 23. Screening station all day. What a relief. Boys on the beach are having a tough time.

24. Received more ammunition. First time I steered the ship alongside another ship. Firing all day. Got a couple of tanks.

26. Fired on Tinian at night, still plenty of batteries there. Every once in a while they open up on us. Air attacks again.

28. Fire support for 24 hours. Observers report we are best shot!

29. Firing during the day screening at night.

30. Secured all day. We have been pretty lucky so far, no hits though some have been close.

5. Fire support all day, air attack all night, no sleep at all.

6. Firing on Manniagasee Is. Same island that hit California.

7. Screening all day. Saw marines that were pushed out on reef by Jap counter attack.

8. Screened all day. Out on screening station, passed a lot of bodies. [Next page.] Boy do they stink!