Share
Connect
Manuscripts
»
B
»
Admiral Arleigh A. Burke, USN: Inventory of His Collection in the Navy Department Library

Admiral Arleigh A. Burke, USN: Inventory of His Collection in the Navy Department Library

Arrangement of the Records

From Destroyer Command in the South Pacific, he reported in March of 1944 as Chief of Staff to Commander, Fast Carrier Task Force, Admiral Marc Mitscher. While serving with this famed carrier force, Burke was promoted to Commodore, and participated in all its naval engagements until June 1945 shortly before the surrender of Japan. He was aboard both USS Bunker Hill (CV-17) and USS Enterprise (CV-6) when they were hit by Japanese suicide planes during the Okinawa campaign.

Admiral Burke received numerous combat awards during his forty-two years in the Navy including the Navy Cross, the Distinguished Service Medal, the Legion of Merit and the Purple Heart. But none was more cherished than two awards which came early in his career. In 1928 while serving aboard USS Procyon (AK-19), he was commended for the "rescue of shipwrecked and seafaring men," and in 1939 while serving in his first command, USS Mugford (DD-389), he was commended when his destroyer obtained an unprecedented perfect score during short-range battle practice, thereby winning the Destroyer Gunnery Trophy for 1939-1940.

The bulk of the collection consists of his official commission in the US Navy, honorary certificates, membership cards, and miscellaneous ephemera collected by Admiral Burke after the end of World War II. A small, but significant part of the collection consists of the personal copies of official message flimsies sent and received by Admiral Burke during the Battle of the Philippine Sea 13 June to 22 June 1944.

Arrangement of the Records

Notes on Admiral Burke's message to Admiral Hopwood sent via Moon relay[date]
Letter to Capt. Crump of 12 November 1958 regarding is command of USS Assurance (MSO-521)
Copy of typed letter to Captain Maynard dated 22 April 1957, thanking him for his support of Admiral Burke's nomination to be Chief Naval Operator of Nuclear Reactor Simulator. License No. 1 included in collection.
A green notebook containing "to do" lists, dated 23 July 1946.

Programs and Invitations to Official Ceremonies

Schedule of Events for US Naval Personnel Attending
Program for US Special Delegations
Coronation Ticket for Rear Admiral A. A. Burke
British Railway Map for Coronation 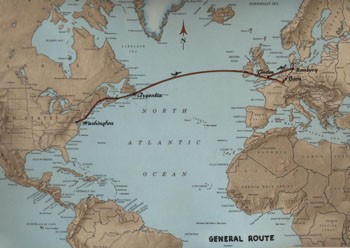 Oversize Certificates [in map draw no. 9]

Manuscripts are unavailable for loan and must be consulted in the library. Photocopying of manuscripts is generally prohibited, though the use of digital cameras by researchers to reproduce non-copyrighted materials is permitted. Permission to photocopy a limited number of pages may be granted by the reference staff, contingent upon the physical state of items. All photocopying of materials shall be done by the reference staff, or under their close supervision. The use of personal scanners by non-library staff personnel must be approved by the reference staff on a document-by-document basis (Reference: Naval Historical Center Instruction [NAVHISTCENTINST] 5070.1C.).

The Papers of Admiral Arleigh A. Burke, 1942-1952, are housed in the Operational Archives, Naval History and Heritage Command.

The collection was processed and a finding aid prepared by Thomas Wildenberg in January 2011.