Content adapted from text provided by the Naval History Foundation.

This postcard was sent by Robert Willis to June Staley less than a week after the Japanese attack on Pearl Harbor. These postcards were an effort by military authorities to permit servicemembers to notify their loved ones of their status. Because of the uncertainties of the ongoing conflict, communication was limited to a choice of standard responses. The member was required to cross off statements that were inapplicable. Luckily, Willis indicates that he survived the attack without major injury.

In a time when Hawaii was a remote, hardship duty station, many of these postcards took an agonizing six weeks to reach the mainland. Little is known about the relationship between Willis and Staley, but it is believed that Willis was Staley’s high school friend. 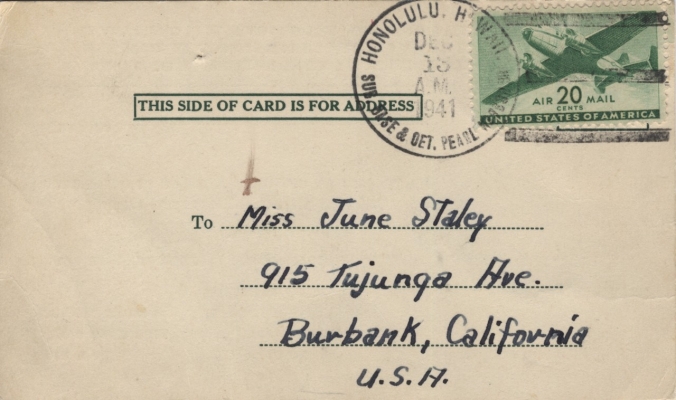 THIS SIDE OF CARD IS FOR ADDRESS 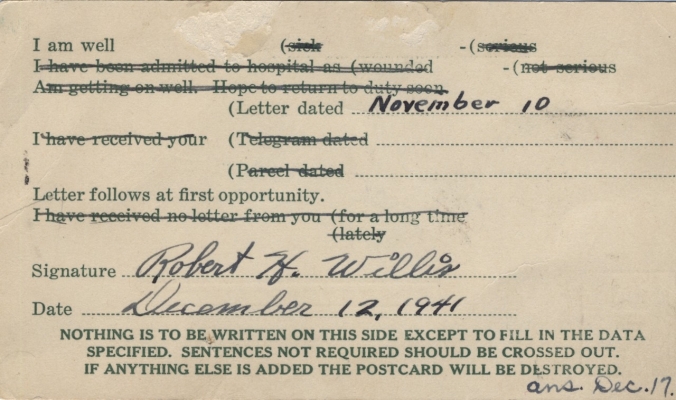 Am getting on well. Hope to return to duty soon[crossed out]

I have received your       (Telegram dated[crossed out]

NOTHING IS TO BE WRITTEN ON THIS SIDE EXCEPT TO FILL IN THE DATA SPECIFIED. SENTENCES NOT REQUIRED SHOULD BE CROSSED OUT. IF ANYTHING ELSE IS ADDED THE POSTCARD WILL BE DESTROYED.