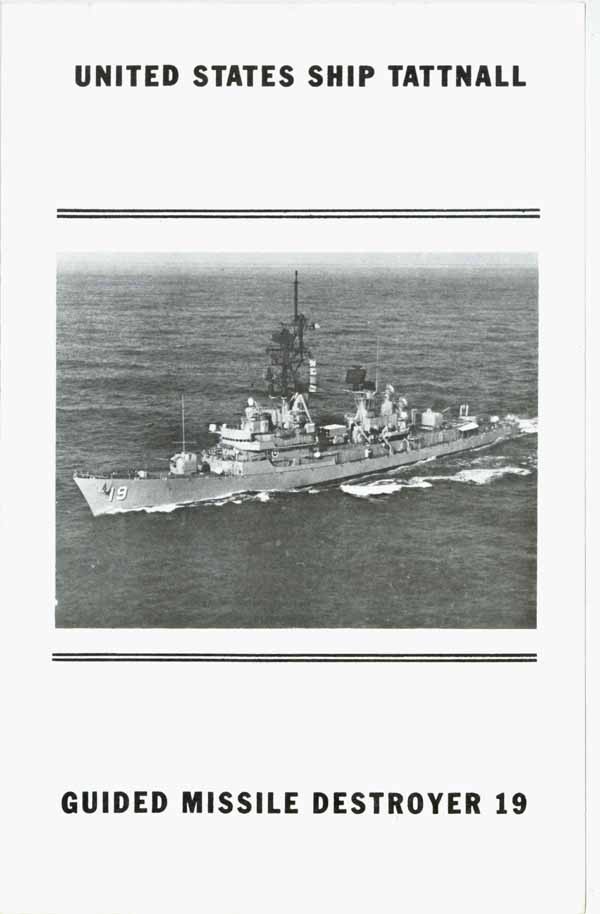 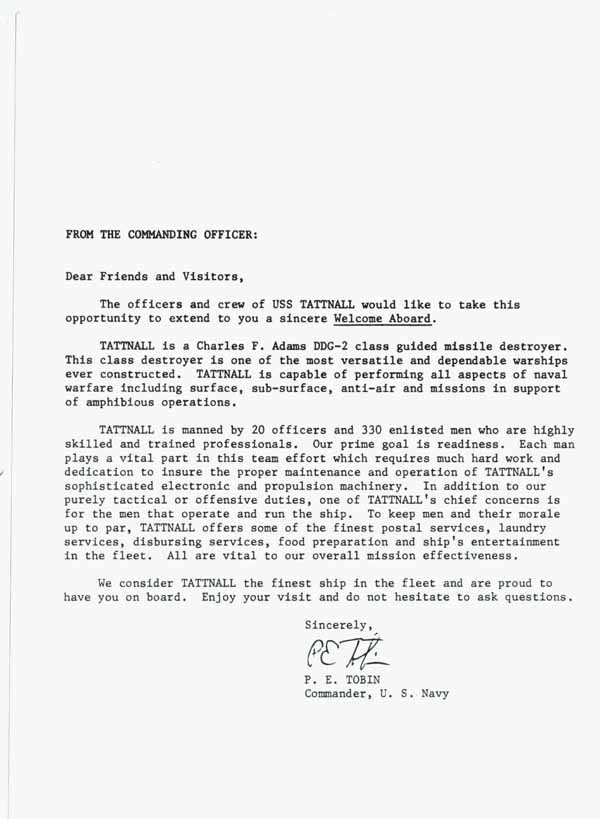 From the Commanding Officer:

The officers and crew of USS Tattnall would like to take this opportunity to extend to you a sincere Welcome Aboard.

TATTNALL is a Charles F. Adams DDG-2 class guided missile destroyer. This class destroyer is one of the most versatile and dependable warships ever constructed.

TATTNALL is capable of performing all aspects of naval warfare including surface, sub-surface, anti-air and missions in support of amphibious operations.

TATTNALL is manned by 20 officers and 330 enlisted men who are highly skilled and trained professionals. Our prime goal is readiness. Each man plays a vital part in this team effort which requires much hard work and dedication to insure the proper maintenance and operation of TATTNALL’s sophisticated electronic and propulsion machinery. In addition to our purely tactical or offensive duties, one of TATTNALL’s chief concerns is for the men that operate and run the ship. To keep men and their morale up to par, TATTNALL offers some of the finest postal services, laundry services, disbursing services, food preparation and ship’s entertainment in the fleet. All are vital to our overall mission effectiveness.

We consider TATTNALL the finest ship in the fleet and are proud to have you on board. Enjoy your visit and do not hesitate to ask questions. 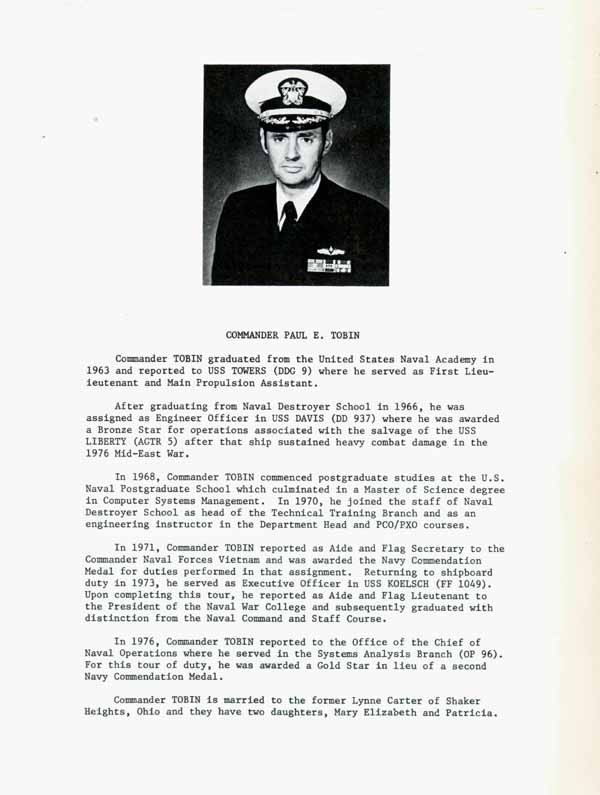 Commander TOBIN graduated from the United States Naval Academy in 1963 and reported to USS Towers (DDG 9) where he served as First Lieutenant and Main Propulsion Assistant.

After graduating from Naval Destroyer School in 1966, he was assigned as Engineer Officer in USS DAVIS (DD 937) where he was awarded a Bronze Star for operations associated with the salvage of the USS LIBERTY (AGTR 5) after that ship sustained heavy combat damage in the 1976 Mid-East War.

In 1968, Commander TOBIN commenced postgraduate studies at the U.S. Naval Postgraduate School which culminated in a Master of Science degree in Computer Systems Management. In 1970, he joined the staff of Naval Destroyer School as head of the Technical Training Branch and as an engineering instructor in the Department Head and PCO/PXO courses.

In 1971, Commander TOBIN reported as Aide and Flag Secretary to the Commander Naval Forces Vietnam and was awarded the Navy Commendation Medal for duties performed in that assignment. Returning to shipboard duty in 1973, he served as Executive Officer in USS KOELSCH (FF 1049). Upon completing this tour, he reported as Aide and flag Lieutenant to the President of the Naval War College and subsequently graduated with distinction from the Naval Command and Staff Course.

In 1976, Commander TOBIN reported to the Office of the Chief of Naval Operations where he served in the Systems Analysis Branch (OP 96). For this tour of duty, he was awarded a Gold Star in lieu of a second Navy Commendation Medal.

Commander TOBIN is married to the former Lynne Carter of Shaker Heights, Ohio and they have two daughters, Mary Elizabeth and Patricia. 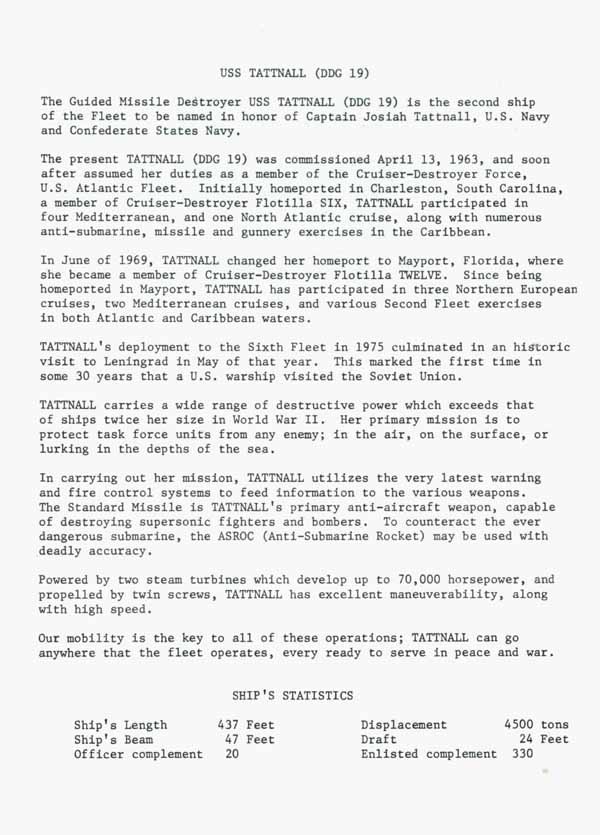 The Guided Missile Destroyer USS TATTNALL (DDG 19) is the second ship of the Fleet to be named in honor of Captain Josiah Tattnall, U.S. Navy and Confederate States Navy.

The present TATTNALL (DDG 19) was commissioned April 13, 1963, and soon after assumed her duties as a member of the Cruiser-Destroyer Force, U.S. Atlantic Fleet. Initially homeported in Charleston, South Carolina, a member of Cruiser-Destroyer Flotilla SIX, TATTNALL participated in four Mediterranean, and one North Atlantic cruise, along with numerous anti-submarine, missile and gunnery exercises in the Caribbean.

In June of 1969, TATTNALL changed her homeport to Mayport, Florida, where she became a member of Cruiser-Destroyer Flotilla TWELVE. Since being homeported in Mayport, TATTNALL has participated in three Northern European cruises, two Mediterranean cruises, and various Second Fleet exercises in both Atlantic and Caribbean waters.

TATTNALL’s deployment to the Sixth Fleet in 1975 culminated in an historic visit to Leningrad in May of that year. This marked the first time in some 30 years that a U.S. warship visited the Soviet Union.

TATTNALL carries a wide range of destructive power which exceeds that of ships twice her size in World War II. Her primary mission is to protect task force units from any enemy; in the air, on the surface, or lurking in the depths of the sea.

In carrying out her mission, TATTNALL utilizes the very latest warning and fire control systems to feed information to the various weapons. The Standard Missile is TATTNALL’s primary anti-aircraft weapon, capable of destroying supersonic fighters and bombers. To counteract the ever dangerous submarine, the ASROC (Anti-Submarine Rocket) may be used with deadly accuracy.

Powered by two steam turbines which develop up to 70,000 horsepower, and propelled by twin screws, TATTNALL has excellent maneuverability, along with high speed.

Our mobility is the key to all of these operations; TATTNALL can go anywhere that the fleet operates, ever[y] ready to serve in peace and war.