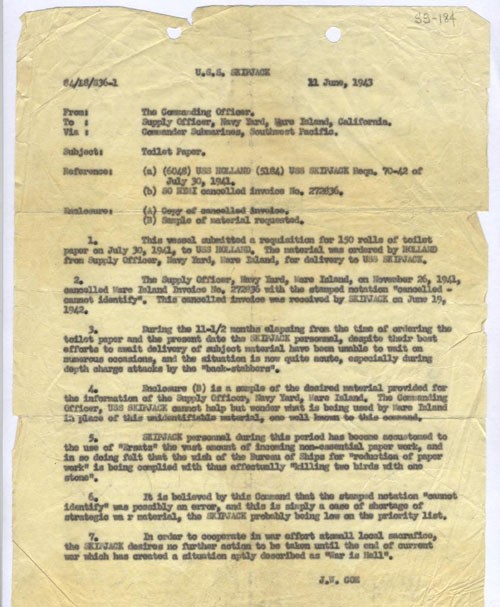 Note: In the 1959 comedy Operation Petticoat, Commander Sherman, played by Cary Grant writes a letter to the supply department about the inexplicable lack of toilet paper on board the fictional USS Sea Tiger. This scene is based on an actual letter written by Lieutenant Commander James Wiggins Coe, Commanding Officer of the USS Skipjack to the supply department at the Mare Island Navy Yard.

1.         This vessel submitted a requisition for 150 rolls of toilet paper on July 30, 1941, to USS HOLLAND. This material was ordered by HOLLAND from Supply Officer, Navy Yard, Mare Island, for delivery to USS SKIPJACK.

3.         During the 11-1/2 months elapsing from the time of ordering the toilet paper and the present date the SKIPJACK personnel, despite their best efforts to await delivery of subject material have been unable to wait on numerous occasions, and the situation is now quite acute, especially during depth charge attacks by the “back-stabbers”.

4.         Enclosure (B) is a sample of the desired material provided for the information of the Supply Officer, Navy Yard, Mare Island. The Commanding Officer, USS SKIPJACK cannot help but wonder what is being used by Mare Island in place of this unidentifiable material, one well known to this command.

5.         SKIPJACK personnel during this period has become accustomed to the use of “Ersatz” the vast amount of incoming non-essential paper work, and in so doing felt that the wish of the Bureau of Ships for “reduction of paper work” is being complied with thus effectually “killing two birds with one stone”.

6.         It is believed by this Command that the stamped notation “cannot identify” was possibly an error, and this is simply a case of shortage of strategic war material, the SKIPJACKprobably being low on the priority list.

7.         In order to cooperate in war effort at small local sacrifice, the SKIPJACK desires no further action to be taken until the end of current war which has created a situation aptly described as “War is Hell”.