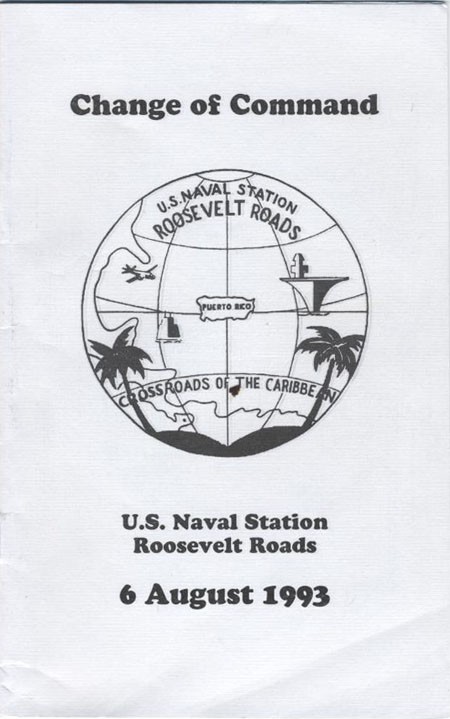 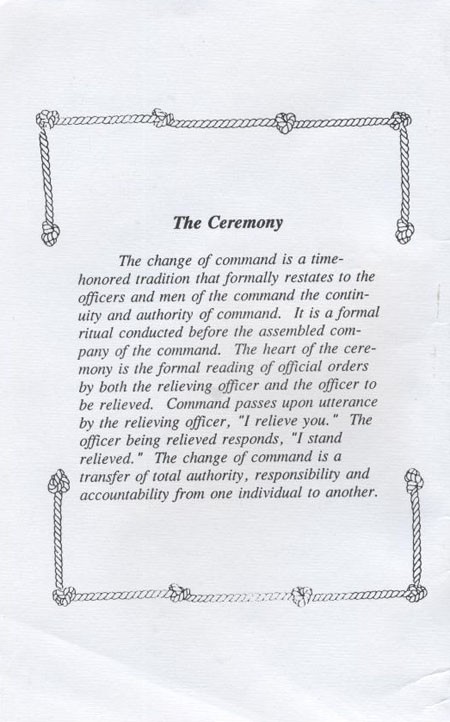 The change of command is a time-
honored tradition that formally restates to the
officers and men of the command the contin-
uity and authority of command. It is a formal
ritual conducted before the assembled com-
pany of the command. The heart of the cere-
mony is the formal reading of official orders
by both the relieving officer and the officer to
be relieved. Command passes upon utterance
by the relieving officer, "I relieve you." The
officer being relieved responds, "I stand
relieved." The change of command is a
transfer of total authority, responsibility and
accountability from one individual to another. 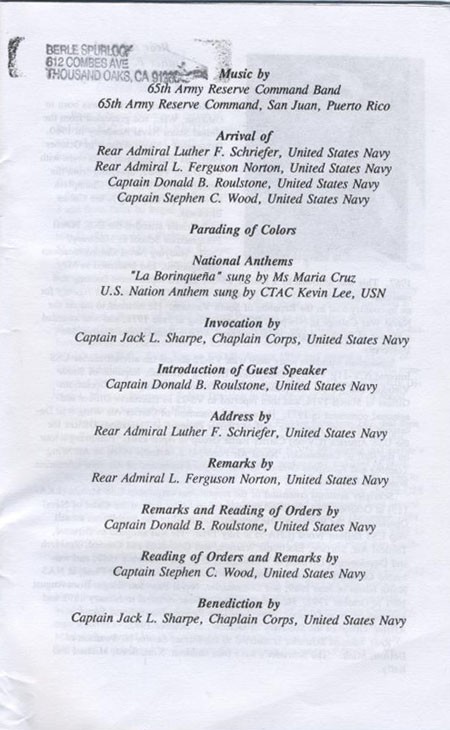 Remarks and Reading of Orders by
Captain Donald B. Roulstone, United States Navy 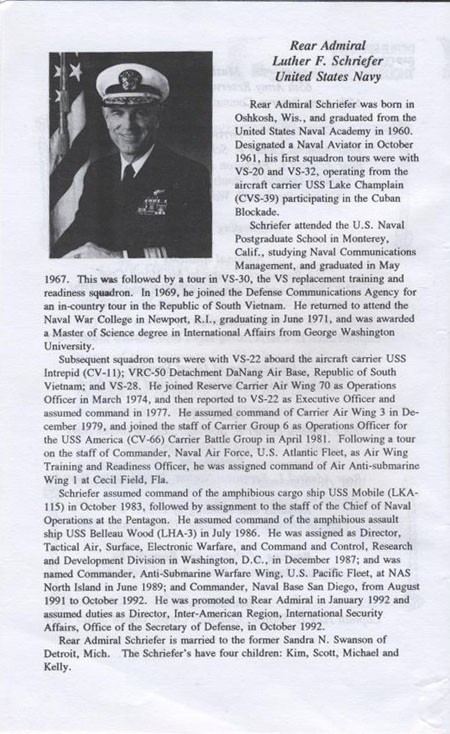 Rear Admiral Schriefer was born in Oshkosh, Wis., and graduated from the United States Naval Academy in 1960. Designated a Naval Aviator in October 1961, his first squadron tours were with VS-20 and VS-32, operating from the aircraft carrier USS Lake Champlain (CVS-39) participating in the Cuban Blockade.

Schriefer attended the U.S. Naval Postgraduate School in Monterey, Calif., studying Naval Communications Management, and graduated in May 1967. This was followed by a tour in VS-30, the VS replacement training and readiness squadron. In 1969, he joined the Defense Communications Agency for an in-country tour in the Republic of South Vietnam. He returned to attend the Naval War College in Newport, R.I., graduating in June 1971, and was awarded a Master of Science degree in International Affairs from George Washington University.

Subsequent squadron tours were with VS-22 aboard the aircraft carrier USS Intrepid (CV-11); VRC-50 Detachment DaNang Air Base, Republic of South Vietnam; and VS-28. He joined Reserve Carrier Air Wing 70 as Operations Officer in March 1974, and then reported to VS-22 as Executive Officer and assumed command in 1977. He assumed command of Carrier Air Wing 3 in December 1979, and joined the staff of Carrier Group 6 as Operations Officer for the USS America (CV-66) Carrier Battle Group in April 1981. Following a tour on the staff of Commander, Naval Air Force, U.S. Atlantic Fleet, as Air Wing Training and Readiness Officer, he was assigned command of Air Anti-submarine Wing 1 at Cecil Field, Fla.

Schriefer assumed command of the amphibious cargo ship USS Mobile (LKA-115) in October 1983, followed by assignment to the staff of the Chief of Naval Operations at the Pentagon. He assumed command of the amphibious assault ship USS Belleau Wood (LHA-3) in July 1986. He was assigned as Director, Tactical Air, Surface, Electronic Warfare, and Command and Control, Research and Development Division in Washington, D.C., in December 1987; and was named Commander, Anti-submarine Warfare Wing, U.S. Pacific Fleet, at NAS North Island in June 1989; and Commander, Naval Base San Diego, from August 1991 to October 1992. He was promoted to Rear Admiral in January 1992 and assumed duties as Director, Inter-American Region, International Security Affairs, Office of the Secretary of Defense, in October 1992. 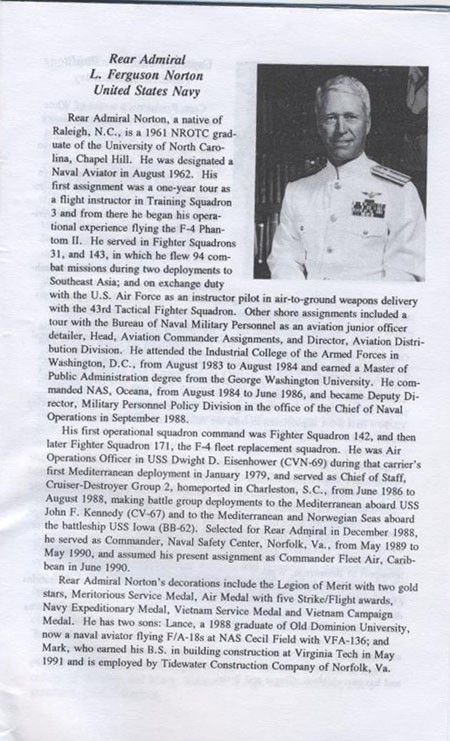 Rear Admiral Norton, a native of Raleigh, N.C., is a 1961 NROTC graduate of the University of North Carolina, Chapel Hill. He was designated a Naval Aviator in August 1962. His first assignment was a one-year tour as a flight instructor in Training Squadron 3 and from there he began his operational experience flying the F-4 Phantom II. He served in Fighter Squadrons 31, and 143, in which he flew 94 combat missions during two deployments to Southeast Asia; and on exchange duty with the U.S. Air Force as an instructor pilot in air-to-ground weapons delivery with the 43rd Tactical Fighter Squadron. Other shore assignments included a tour with the Bureau of Naval Military Personnel as an aviation junior officer detailer, Head, Aviation Commander Assignments, and Director, Aviation Distribution Division. He attended the Industrial College of the Armed Forces in Washington, D.C., from August 1983 until August 1984 and earned a Master of Public Administration Degree from the George Washington University. He commanded NAS, Oceana, from August 1984 to June 1986, and became Deputy Director, Military Personnel Policy Division in the office of the Chief of Naval Operations in September 1988.

His first operational squadron command was Fighter Squadron 142, and then later Fighter Squadron 171, the F-4 fleet replacement squadron. He was Air Operations Officer in USS Dwight D. Eisenhower (CVN-69) during that carrier's first Mediterranean deployment in January 1979, and served as Chief of Staff, Cruiser-Destroyer Group 2, homeported in Charleston, S.C., from June 1986 to August 1988, making battle group deployments to the Mediterranean aboard USS John F. Kennedy (CV-67) and to the Mediterranean and Norwegian Seas aboard the battleship USS Iowa (BB-62). Selected for Rear Admiral in December 1988, he served as Commander, Naval Safety Center, Norfolk, Va., from May 1989 to May 1990, and assumed his present assignment as Commander, Fleet Air, Caribbean in June 1990.

Rear Admiral Norton's decorations include the Legion of Merit with two gold stars, Meritorious Service Medal, Air Force with five Strike/Flight Awards, Navy Expeditionary Medal, Vietnam Service Medal and Vietnam Campaign Medal. He has two sons; Lance, a 1988 graduate of Old Dominion University, now a naval aviator flying F/A-18s at NAS Cecil Field with VFA-136; and Mark, who earned his B.S. in building construction at Virginia Tech in May 1991 and is employed by Tidewater Construction Company of Norfolk, Va. 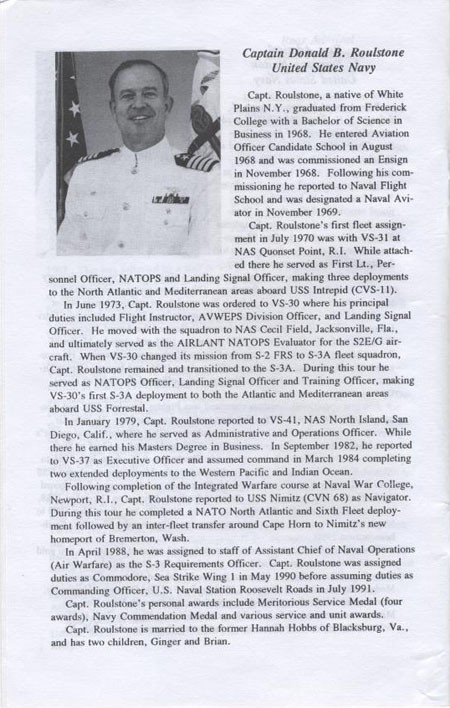 Capt. Roulstone, a native of White Plains, N.Y., graduated from Frederick College with a Bachelor of Science in Business in 1968. He entered Aviation Officer Candidate School in August 1968 and was commissioned an Ensign in November 1968. Following his commissioning he reported to Naval Flight School and was designated a Naval Aviator in November 1969.

Capt. Roulstone's first fleet assignment in July 1970 was with VS-31 at NAS Quonset Point, R.I. While attached there he served as First Lt., Personnel Officer, NATOPS and Landing Signal Officer, making three deployments to the North Atlantic and Mediterranean areas aboard USS Intrepid (CVS-11).

In June 1973, Capt. Roulstone was ordered to VS-30 where his principal duties included Flight Instructor, AVWEPS Division Officer, and Landing Signal Officer. He moved with the squadron to NAS Cecil Field, Jacksonville, Fla., and ultimately served as the AIRLANT NATOPS Evaluator for the S2E/G aircraft. When VS-30 changed its mission from S-2 FRS to S-3A fleet squadron, Capt. Roulstone remained and transitioned to the S-3A. During this tour he served as NATOPS Officer, Landing Signal Officer and Training Officer, making VS-30's first S-3A deployment to both the Atlantic and Mediterranean areas aboard USS Forrestal.

In January 1979, Capt. Roulstone reported to VS-41, NAS North Island, San Diego, Calif., where he served as Administrative and Operations Officer. While there he earned his Masters Degree in Business. In September 1982, he reported to VS-37 as Executive Officer and assumed command in March 1984 completing two extended deployments to the Western Pacific and Indian Ocean.

Following completion of the Integrated Warfare course at Naval War College, Newport, R.I., Capt. Roulstone reported to USS Nimitz (CVN 68) as Navigator. During this tour he completed a NATO North Atlantic and Sixth Fleet deployment followed by an inter-fleet transfer around Cape Horn to Nimitz's new homeport of Bremerton, Wash.

In April 1988, he was assigned to staff of Assistant Chief of Naval Operations (Air Warfare) as the S-3 Requirements Officer. Capt. Roulstone was assigned duties as Commodore, Sea Strike Wing 1 in May 1990 before assuming duties as Commanding Officer, U.S. Naval Station Roosevelt Roads in July 1991.

Capt. Roulstone is married to the former Hannah Hobbs of Blacksburg, Va., and has two children, Ginger and Brian. 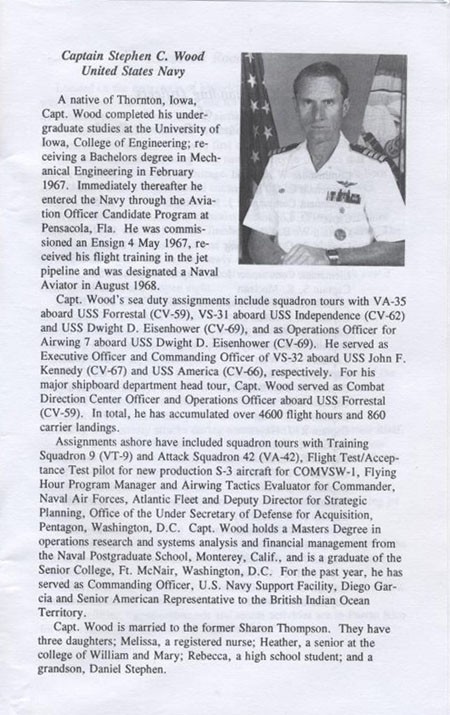 A native of Thornton, Iowa, Capt. Wood completed his undergraduate studies at the University of Iowa, College of Engineering; receiving a Bachelor's degree in Mechanical Engineering in February 1967. Immediately thereafter, he entered the Navy through the Aviation Officer Candidate Program at Pensacola, Fla. He was commissioned an Ensign 4 May 1967, received his flight training in the jet pipeline and was designated a Naval Aviator in August 1968.

Capt. Wood is married to the former Sharon Thompson. They have three daughters; Melissa, a registered nurse; Heather, a senior at the college of William and Mary; Rebecca, a high school student; and a grandson, Daniel Stephen. 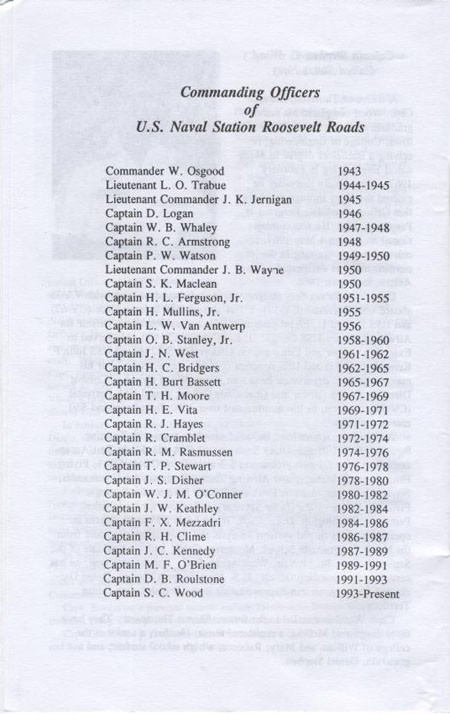 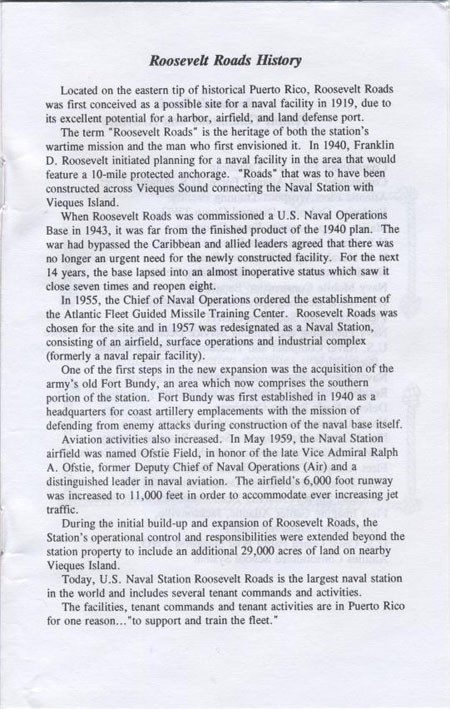 Located on the eastern tip of historical Puerto Rico, Roosevelt Roads was first conceived as a possible site for a naval facility in 1919, due to its excellent potential for a harbor, airfield and land defense port.

The term "Roosevelt Roads" is the heritage of both the station's wartime mission and the man who first envisioned it. In 1940, Franklin D. Roosevelt initiated planning for a naval facility in the area that would feature a 10-mile protected anchorage. "Roads" that was to have been constructed across Vieques Sound connecting the Naval Station with Vieques Island.

When Roosevelt Roads was commissioned a U.S. Naval Operations Base in 1943, it was far from the finished product of the 1940 plan. The war had bypassed the Caribbean and allied leaders agreed that there was no longer an urgent need for the newly constructed facility. For the next 14 years, the base lapsed into an almost inoperative status which saw it close seven times and reopen eight.

In 1955, the Chief of Naval Operations ordered the establishment of the Atlantic Fleet Guided Missile Training Center. Roosevelt Roads was chosen for the site and in 1957 was redesignated as a Naval Station, consisting of an airfield, surface operations and industrial complex (formerly a naval repair facility).

One of the first steps in the new expansion was the acquision of the army's old Fort Bundy, an area which now comprises the southern portion of the station. Fort Bundy was first established in 1940 as a headquarters for coastal artillery emplacements with the mission of defending from enemy attacks during construction of the naval base itself.

Aviation activities also increased. In May 1959, the Naval Station airfield was named Ofstie Field, in honor of the late Vice Admiral Ralph A. Ofstie, former Deputy Chief of Naval Operations (Air) and a distinguished leader in naval aviation. The airfield's 6,000 foot runway was increased to 11,000 feet in order to accommodate ever increasing jet traffic.

During the initial buildup and expansion of Roosevelt Roads, the Station's operational control and responsibilities were extended beyond the station property to include an additional 29,000 acres of land on nearby Vieques Island.

The facilities, tenant commands and tenant activities are in Puerto Rico for one reason..."to support and train the fleet." 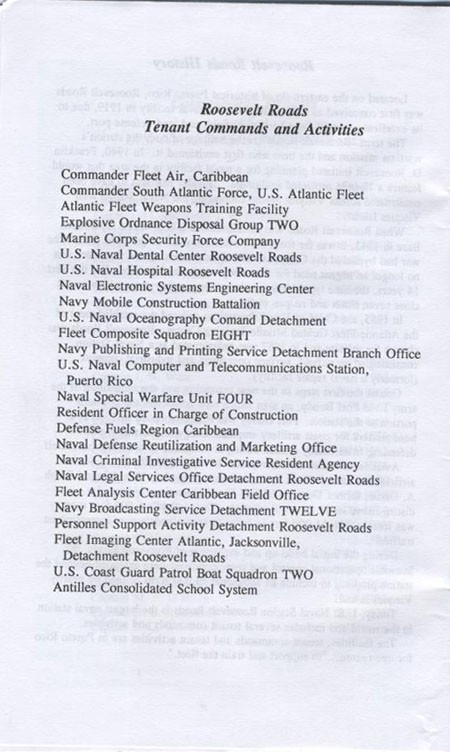 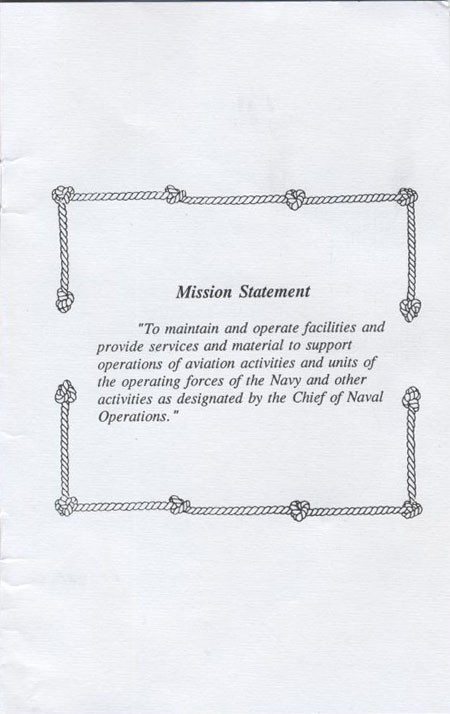 "To maintain and operate facilities and provide services and material to support operations of aviation activities and units of the operating forces of the Navy and other activities as designated by the Chief of Naval Operations." 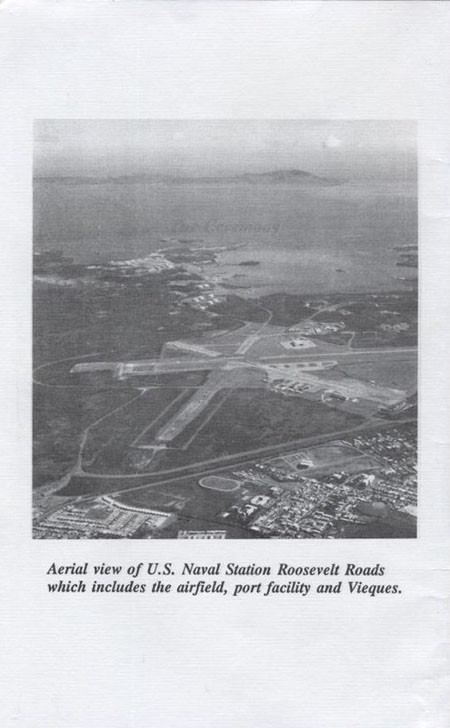