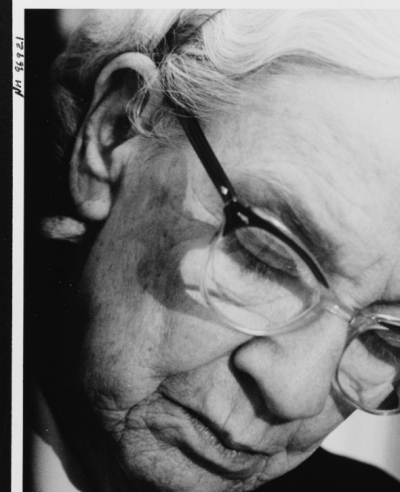 Rear Admiral Grace Hopper was a pioneer in the field of computer science. She worked as a programmer for the Harvard Mark I computer in the final years of World War II. She also worked on the Mark II and Mark III computers. After working on the Mark computer programs, she joined the Eckert-Mauchly Computer Corporation in Philadelphia—the company building UNIVAC I, the first commercial electronic computer. As a senior programmer with this company, she published the first paper on compilers for programming language. Through the 1950s, she continued to publish papers on software and programming languages. She was part of the first meeting of CODASYL and instrumental in the development of COBOL—a standardized computer language. Hopper’s long Navy career began in WWII when she joined the Navy Reserve and served in the WAVES. Her contributions to the Navy’s computing infrastructure made her an invaluable asset to the service. After retiring from the Navy Reserve in 1966, at age 60, with the rank of commander, she was recalled and continued to serve until 1986 when she retired as a rear admiral. At the time of her retirement, at 79 years of age, she was the oldest commissioned officer in the United States Navy. Hopper was awarded the Defense Distinguished Service Medal. She was interred in Arlington National Cemetery following her passing on New Year’s Day 1992.