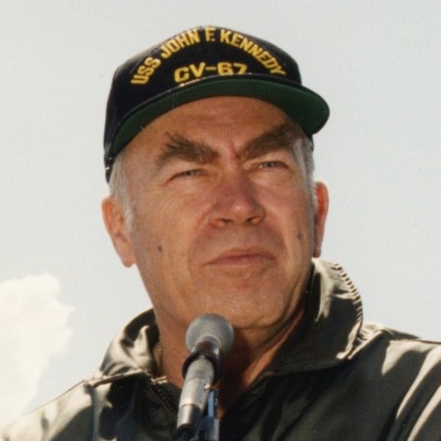 Admiral Kelso’s tenure as Chief of Naval Operations was marked by the impressive victory of Navy and other coalition forces over Saddam Hussein’s Iraq, but also by allegations that U.S. naval personnel had engaged in acts of sexual harassment.

A native of Fayetteville, Tennessee, Frank Kelso graduated from the U.S. Naval Academy in 1956. During his forty-two-year career in the Navy, he served tours as commanding officer of nuclear attack submarines USS Finback and USS Bluefish and as Commander Submarine Squadron Seven. In 1985, Kelso took command of the U.S. Sixth Fleet and in that position directed joint Navy-Air Force air strikes against Libya. In 1986 he was named Commander in Chief, U.S. Atlantic Fleet and in 1988 Commander in Chief, U.S. Atlantic Command. He took the helm as Chief of Naval Operations in 1990. Admiral Kelso was head of the Navy during Operation Desert Storm, launched in response to Iraqi dictator Saddam Hussein’s 2 August 1990 invasion of Kuwait. Naval forces he had armed, equipped, and trained prevailed against the enemy in one of the most masterful campaigns in military history. Also on Admiral Kelso’s watch, individuals made allegations that naval officers had engaged in sexual harassment of women at the annual Tailhook Association convention.