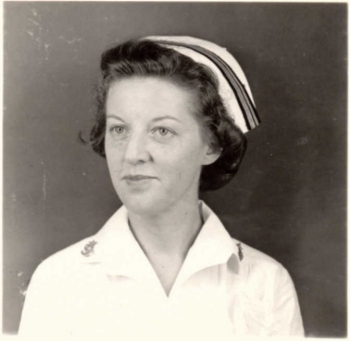 Anne Bernatitus was a decorated career Navy nurse presented the first Legion of Merit for her treatment of the wounded throughout the Japanese siege of Bataan and Corregidor from December 1941-April 1942.  When Corregidor fell, Bernatitus evaded capture aboard the USS Spearfish (SS-190). Bernatitus was appointed as Ensign in the Navy Nurse Corps in 1936 after graduating from the Wyoming Valley Homeopathic Hospital Training School in Wilkes-Barre, Pennsylvania in 1934 and the University of Pennsylvania’s Graduate Hospital post-graduate program in operating room nursing in 1935.  Bernatitus’s first assignments with the Navy were as a staff nurse at the Naval Hospitals in Chelsea, Massachusetts and Annapolis, Maryland.  In 1940, she was assigned duty on board USS Chaumont (AP-5) before assignment to the U.S. Naval Hospital at Canacao, Philippines Islands in July 1940.  After the attack on Pearl Harbor and start of the Japanese war in the Pacific, Canacoa Hospital staff and patients were evacuated to Manila and Bataan under U.S. Army supervision.  As the lone Navy nurse on her team, Bernatitus treated both American, Filipino, and Japanese wounded from the Japanese siege between December and April.  Bernatitus was evacuated to Corregidor days before Bataan fell and was chosen to be one of the nurses to be evacuated by submarine.  After arriving safely back in the United States, Bernatitus was promoted to Chief Nurse from 1942-1944 served at Naval hospitals in Bethesda, New Orleans, Great Lakes, and San Francisco.  In 1945 she returned to the Pacific Theater aboard USS Relief  (AH-1) as Chief of Nursing Service and participated in the Okinawa Invasion.  Bernatitus continued to serve the Navy after WWII until her retirement in 1959.  She passed in her hometown of Wilkes-Barre, Pennsylvania in March 2003.