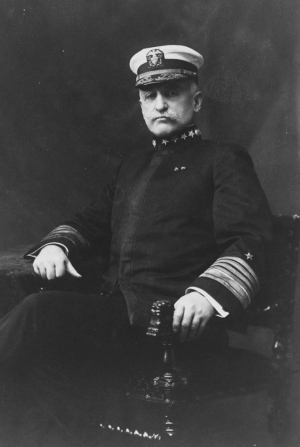 As first in the post, Admiral Benson defined and strengthened the position of Chief of Naval Operations and during World War I oversaw the operations of more than a half million Sailors and two thousand ships.

William S. Benson, of Macon, Georgia, graduated from the U.S. Naval Academy in 1877. As a captain in 1909, his first major command was the dreadnought USS Utah.  He later served as commandant of the Philadelphia Navy Yard. In 1915 the Navy promoted Benson to rear admiral and named him Chief of Naval Operations. To prepare the Navy for war, he greatly increased its personnel strength and testified before Congress to urge the passage of the 1916 Naval Appropriations Act, which included the largest shipbuilding program in American history. He was promoted to admiral in 1916. During World War I he oversaw the Navy’s rapid expansion, improved navy yards to meet wartime demands, increased the priority of naval aviation, and took the lead in countering German submarine warfare.  As naval advisor to the U.S. delegation to the 1918 peace conference, he made strong recommendations on the naval provisions of the Versailles Treaty. Admiral Benson retired in 1919, spending the next decade promoting a strong American merchant marine. USS Benson (DD-421) and USS Admiral W. S. Benson (AP-120) were commissioned in his honor.