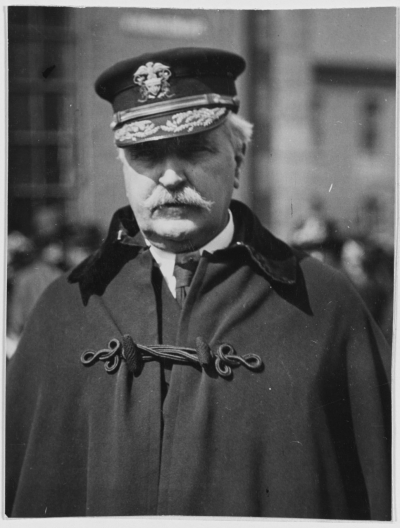 Rear James Henry Glennon commanded Squadron One, Battleship Force, Atlantic Fleet during World War I with USS Missouri (Battleship No. 11) as his flagship.  At the end of the war he commanded Division Five of Squadron Three, Battleship force Two with USS Connecticut (Battleship No. 18) as his flagship. Glennon earned a Navy Cross for his WWI service.  He was appointed a cadet midshipman on 24 September 1874.  During the Spanish-American War, Glennon commanded a forward gun turret on USS Massachusetts and contributed to the sinking of the Reina Mercedes.  During the Philippine Insurrection, Glennon was navigator aboard USS Vicksburg.  He commanded USS Virginia from 1910-1911 and then served as President of the Board of Naval Ordnance and of the Joint Army-Navy Board on Smokeless Powder.  After commanding USS Wyoming from 1913-1915, Glennon returned to Washington, DC and served as President of the Board on Naval Ordnance and also as Commandant of the Washington Navy Yard and Superintendent of the Naval Gun Factory from 1915-1917.  He was selected as the Navy Department representative in a special mission to Russia in 1917 during their Revolution.  After his appointment as a Squadron Commander in WWI, Glennon served as Commandant of Naval District Seattle, and then New York, before his retirement in 1921.  He died in Washington, DC on 30 May 1940 and was buried in Arlington National Cemetery.  His three sons served in the Navy—Captain James Blair Glennon, Lieutenant Commander Harrison Randolph Glennon, and Ensign Philip Thompson Glennon.  Philip died of meningitis aboard the hospital ship USS Solace in July 1917.