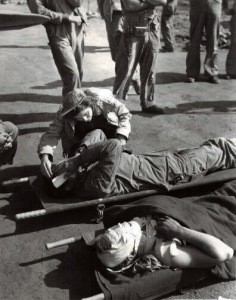 On Tuesday, March 6th, a Navy transport plane circled the volcanic island of Iwo Jima. On board, a 22-year old Navy ensign could only stare at the dreary gray landscape punctuated by explosions. Her name was Jane Kendeigh of Henrietta Township, Ohio, one of the thousands of small towns that sent their youngest citizens to far-flung locations. Yet, there was no one quite like her for she was the first Navy flight nurse sent to a Pacific battlefield, one of the deadliest of World War II. When the airfield, which had been under attack, was cleared for operations, the transport plane landed and Kendeigh made her way off the plane and to the sides of stretchers bearing wounded Marines, all beneath the gaze of Mt. Suribachi atop which the most famous flag raising in history had occurred. A photographer snapped an image of her kneeling over one of the men, holding his hand while peering into a face shrouded in bandages. Within days it was splashed across newspapers around the country. These young Marines were the first of some 2,393 leathernecks evacuated from Iwo Jima on board Navy aircraft over the course of fifteen days, many of them tended to by Kendeigh and her fellow flight nurses. When asked how the men reacted to seeing a woman in the combat zone, she replied, “The same as other places, they whistled.”

Evacuation of casualties by air was not a new concept in the Pacific—aircraft of the South Pacific Combat Air Transport Command (SCAT) performed medical evacuations from Guadalcanal in 1942. Yet, in March 1945, as the fighting raged on Iwo Jima, the Navy officially designated the Naval Air Transport Service (NATS) with the mission of evacuating wounded personnel. The move came during one of the bloodiest battles of the Pacific War and on the eve of another, the invasion of Okinawa that commenced on April 1, 1945.

The squadron within NATS that shouldered the brunt of air evacuation at Okinawa was Evacuation Squadron (VRE) 1. Captain Daniel W. Tomlinson, who as a junior officer in the 1920s had teamed up with two fellow aviators to form a stunt team called the Three Sea Hawks, spearheaded the formation of the new squadron. Having left the Navy in the interwar years to work for TWA, he returned to service in World War II and by 1945 was leading NATS’ Pacific operations. In March 1945, Tomlinson contacted former TWA pilot, Lieutenant Jack Thornburg, then commanding Transport Squadron (VR) 3 at Naval Air Station (NAS) Olathe, Kansas, ordering him to report to the Pacific and form VRE-1. 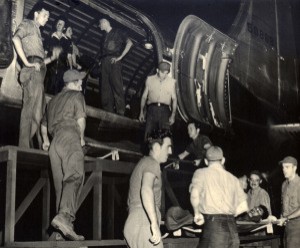 View of the offloading of wounded personnel from an R5D Skymaster on Guam.
Download

With a nucleus of crews and R5D Skymaster aircraft, which would be called upon to transport wounded over 1,200 miles from Okinawa to Guam, drawn from VR-11 in Hawaii, VRE-1 was ready for action before the first troops went ashore at Okinawa. Seven days after the landings, the first VRE-1 R5D touched down at Yontan Airfield on Okinawa, spending just 45 minutes on the ground and loading thirty-two litters for evacuation to Guam. They were soon joined by Marine R5C Commando transports, which complemented the longer-range R5Ds. First Lieutenant Tyrone Power, movie actor turned naval aviator, was among those who flew air evacuation missions at the controls of these airplanes. At peak operations in June 1945, VRE-1 operated 33 R5Ds with 54 pilots and on one day the squadron completed twelve flights from Guam to Okinawa, a wartime record. In addition to the pilots, flight nurses like Jane Kendeigh, who followed-up her service at Iwo Jima by becoming the first Navy nurse to land at Okinawa, provided critical care on the flights.

All told, during the campaign for Okinawa, Navy, Marine Corps, and Army Air Forces aircraft evacuated 16,599 casualties, with nearly 60% of them flown out on board VRE-1 airplanes.