posted in FROM THE COCKPIT: STORIES OF NAVAL AVIATION on March 01, 2012 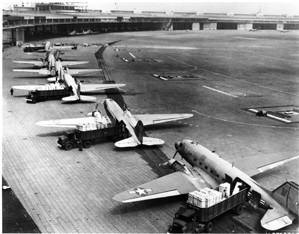 On the morning of 27 October 1948—appropriately, Navy Day—readers of the Honolulu Advertiser awoke to a headline announcing that twenty-four aircraft assigned to Pacific Fleet transport squadrons would be joining a monumental aerial supply effort over Germany. To those living in the idyllic climates and surroundings of Hawaii, the events occurring in Western Europe were a world away, literally and figuratively, and such was the case with the pilots and aircrewmen readying to shift their operations. Though wartime Navy transport squadrons had served worldwide, the Navy’s most visible theater of operations during World War II had been the Pacific, with the Army assuming primacy in battles on the European mainland. Now, Navy aircraft would join those of the U.S. Air Force in supporting the relief of German citizens in the former Nazi capital. 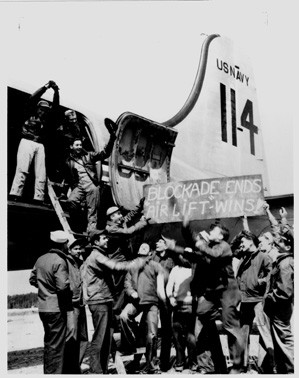 That U.S. airpower was engaged in what would become the largest humanitarian operation ever undertaken by any air force, was the result of Cold War posturing by the Soviet Union. Planning for the postwar occupation of Germany that occurred during the final months of World War II resulted in the decision to divide the nation into four zones of occupation, each controlled by one of the victorious Allied powers—the United States, France, Great Britain, and the Soviet Union. Though located in the Soviet zone of occupation, Berlin, because of its status as the capital, was also divided in a manner mirroring that of the country. In the months following the end of World War II, the emerging conflict between East and West that became known as the Cold War cast its shadow on the relationship between the victorious powers with respect to the governance, economics, and other aspects of life in occupied Germany. The war of words turned to action in March 1948, when Soviet troops began inspecting trains loaded with supplies bound for Berlin and demanded that this practice be allowed to continue, a measure refused by the other powers. Two months later, angered by plans to introduce a new currency in the French, British, and American zones, Soviet forces initiated a full-scale blockade of Berlin, halting all land and water transport to the city. The only remaining lifelines to were three 20-mile wide air corridors from the French, British, and United States zones into Berlin, which soon became routes of survival for the capital city’s beleaguered inhabitants.

On 26 June 1948, General Lucius Clay, Military Governor of the American zone of occupation, initiated “Operation Vittles,” the aerial resupply of Berlin that became known as the Berlin Airlift. With the city’s residents requiring a minimum of 4,500 tons of supplies per day, the 102 transports Clay initially had under his command required assistance in performing the massive endeavor. Joining the build-up, Navy Transport Squadrons (VR) 6 and 8 flew from their respective bases in Guam and Hawaii bound for Germany, receiving only two days notice before shifting their operations halfway around the world. 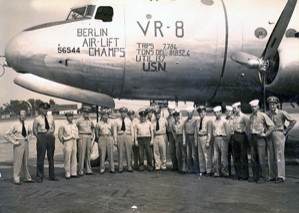 For the ensuing eight months, the naval personnel proved an important part of the stream of Allied transports logging flights to Berlin, which one VR-6 pilot nicknamed “Ten Tons to Templehof” in reference to the airport at which the planes landed to unload their supplies. Oftentimes in the bad weather of a European winter, in which ground controlled approaches were the norm amidst rain, fog, and snow, the Navy crews compiled an enviable record. Each aircraft averaged 10.1 daily flight hours, compiling 45,990 total flight hours and delivering 129,989 tons of food and other supplies, 7.3% of the total tonnage airlifted to the city. The best month came in March 1949, when U.S. aircraft carried 154,475 tons. The participating Navy and Air Force squadrons established an efficiency rating system that outlined what was considered 100% efficiency in such elements as flight hours and tonnage delivered. During the month of March, VR-8 set a record for the entire airlift by achieving 155% efficiency in the 12.2 flight hours per aircraft that it flew over the course of the month. When the last squadron plane returned to the United States, it sported an apt pronouncement on its nose that reflected the importance of Navy participation in the airlift— BERLIN AIRLIFT CHAMPS.

Above, a line of aircraft unload supplies at Templehof Airport, sailors celebrate the end of the Berlin Airlift, and VR-8 personnel celebrate the squadron’s performance record upon returning from Germany.