The crews of the two modified PB4Y-1 Liberators steeled themselves for what lay ahead as they flew towards the island fortress on the horizon. Unlike the low level attacks being carried out by naval aviators and aircrewmen flying the twin-tailed aircraft in land-based Navy bombing squadrons, these two planes from Marine Photographic Squadron (VMD) 254 came armed primarily with cameras. The target of their lenses was the Japanese base at Truk and as the two aircraft initiated their photographic runs, they drew the attention of the enemy below, who threw up antiaircraft fire and sent fighter planes to attack the aerial intruders. Capturing what they could on film, the crews headed back to base, landing at Stirling Island after spending 12 hours in the air and covering over 2,000 miles. Photographers instantly went to work developing the images. The date was February 3, 1944, two weeks before U.S. Navy carrier planes would be unleashed for the first time against what was known as the “Gibraltar of the Pacific.” 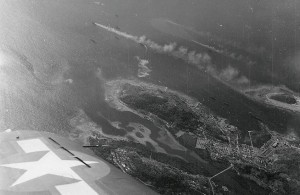 View of Truk under attack taken from a U.S. Navy carrier aircraft.
Download

As the Allies launched their offensive across the Pacific, two enemy strongholds stood as bulwarks against the advance. In the South Pacific it was Rabaul from which Japanese ships and aircraft sortied to counter the Allied march up the Solomon Islands. The object of an air campaign from land and sea, Rabaul was eventually bypassed without an invasion, left to “wither on the vine.” As the Allies launched the Central Pacific drive, it was Truk that played the role of Rabaul in that theater of operations. Located in the Caroline Islands, the atoll was to the Imperial Japanese Navy what Pearl Harbor was to the U.S. Navy. Occupied by the Japanese since 1914, Truk had been built up into the major forward anchorage for the Combined Fleet, one ringed by antiaircraft batteries and airfields packed with enemy aircraft. In addition, these airfields were within range of the Marshall Islands, which were scheduled for invasion in early 1944. It had to be neutralized and with VMD-254’s aerial photographs contributing to planning, February 17th was chosen for the launching of Operation Hailstone, the first carrier raid on Truk.

By 1944, naval aviation was a more potent force than earlier in the war. A handful of carriers had grown to a formidable force of new Essex-class fleet carriers and Independence-class light carriers, their flight decks home to among other aircraft one of the most capable fighter aircraft of the war, the F6F Hellcat. Serving alongside the newer carriers was a venerable link to the war’s earliest days, the carrier Enterprise (CV 6). These ships welcomed the month of February 1944 by striking targets in the Marshall Islands before rearming and replenishing for their next target, one that had a reputation for its formidability. 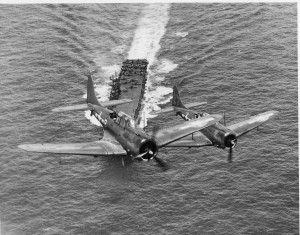 On the morning of February 17, 1944, pilots awakened and filed into their ready rooms. In Enterprise, Bombing Squadron (VB) 10 skipper Lieutenant Commander James D. “Jig Dog” Ramage recalled the pre-flight briefing. “The information was simple and was not novel to us-most of us having sunk battleships, cruisers, and even aircraft carriers in out sleep for three or four nights,” his words testament to how much Truk had been on the minds of his pilots and aircrewmen. Launching from the deck of the “Big E,” Ramage joined the formation of planes heading towards Truk.

Approaching Truk, he heard radio chatter signaling that escorting fighters were engaging the enemy. “Black puffs of antiaircraft fire began to appear around us…Just beyond Moen Island and coming slowly from under a cloud emerged the Dublon anchorage area. At least ten large ships slipped into sight along with double the number of smaller oceangoing vessels…What a field day! At that instant a vessel in the Dublon erupted orange flame and black oily smoke…The supreme instant had arrived.”

With the twinkle of antiaircraft flashes below reminding him of Christmas tree lights, Ramage twisted all 6 foot, 2 inches of his frame into as compact of a ball as possible to take advantage of all the armor protection possible in the cockpit, selecting a ship and entering a dive. Five thousand, four thousand, three thousand- the altitude diminished as a red rising sun painted on the bridge of his target grew larger. At two thousand feet, Ramage released his bomb. “My little Douglas [SBD Dauntless dive-bomber] seemed to leap for joy.” Pulling out at just fifty feet, Ramage exited the target area, feeling the burst of his exploding bomb behind him. 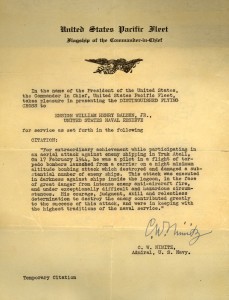 Citation for the Navy Cross awarded to Ensign William Balden for his participation in Torpedo Squadron (VT) 10’s night attack against Truk.
Download

Preceding Ramage into the target area was a fellow squadron commander, Lieutenant Harry W. Harrison of Fighting Squadron (VF) 6 off the carrier Intrepid (CV 11). The fighters were the first aircraft over Truk, sweeping over the base’s airfields in an effort to destroy defending aircraft on the ground. Some Japanese planes managed to get airborne, one of which found itself in the gunsight of Harrison’s F6F Hellcat. “I was directly behind him and fired a short burst, which outside of knocking a few holes in him, did no damage,” Harrison wrote in his diary. “I then nosed over and lost about 100 ft. of altitude so as to come up from below…I fired a 1-2 second burst into the engine and cockpit. A bright red glow could be seen inside the cockpit enclosure. His right wing went down slowly, and the plane dove straight down into the water.”

The actions of Ramage, Harrison, and dozens of others that day were followed up by a landmark attack in naval aviation history when TBF Avengers of Torpedo Squadron (VT) 10 off Enterprise made the first night attack by carrier aircraft, sinking or damaging a total of thirteen ships. With the coming of the dawn came further attacks as carrier planes again descended upon Truk. All told, over the course of two days carrier aircraft destroyed nearly 300 enemy aircraft and sent over 200,000 tons of enemy shipping to the bottom. They also put the first cracks in the “Gibraltar of the Pacific,” which was eventually bypassed on the road to Tokyo.